Ronda proposes the first Grande Date on a quartz movement


Ronda proposes the first Grande Date on a quartz movement 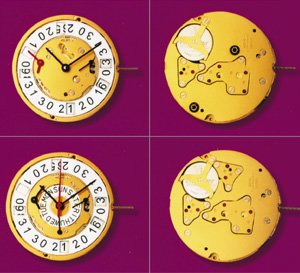 The Swiss movement maker, Ronda, has just launched a new generation of chronograph movements dedicated to the world of sports – the “Ronda Startech” series 5000. The most interesting feature of this new collection is the introduction of new functions based on an existing family that has already proved its reliability, the Startech 2000.

For the first time in the realm of quartz movements, a Grande Date is being offered, opening new possibilities for designers in the sports watch sector, thus moving in the direction of better readability.
Nine versions are available, which allow variations in the placement of this large date in a double window, either at 6 o’clock or at 12 o’clock, as well as additional functions. Besides the hour and minute indications, there is a seconds counter and a one-tenth second counter. Another new development (but not chronographic), the Grande Date is offered in conjunction with an Alarm function or an additional Dual Time function. It is noteworthy that the Grande Date is also equipped with an automatic date change for 30 and 31 days.
The 12 1/2''' calibres of the 5000 series have a diameter of 28.00 mm and a movement thickness of 4.4 mm, and include 13 jewels. The quartz movements that equip this collection are of the highest quality, and meet the specifications of the largest Swiss brands.
Ronda is also moving upmarket. In 2003, the Swiss company produced about 33 million pieces and affirms that it has taken market share from its competitors. “We are positioned in the upper level of the quartz calibre sector,” declares Erich Mosset, the CEO of Ronda. “We have found our place at this new level and are confirming our decision to move uprange.”
The movement maker employs 1,800 people of whom 1,300 are in the firm’s large factories in Thailand. Yet, it is in Ronda’s factories in Lausen and Mendrisio in the Tessin region of Switzerland where these new series of movements are produced, as well as other high quality calibres that the enterprise is proposing to the world’s watch manufacturers.