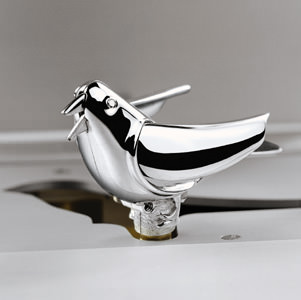 The 17th and 18th centuries were marked by the fashion for snuffbox singing birds, and saw the proliferation of small singing bird ornaments displaying manufacturers’ boundless inventiveness. As part of this mania, the snuffbox was seen as a symbol of good workmanship, creativity and quality. It also triggered the rapid spread of singing bird mechanisms, and Reuge has been the uncontested world singing bird specialist since 1960.

The factory, which is currently undergoing a creative revolution, is inspired by its predecessors’ know-how and yet resolutely forward-looking, and is developing decidedly contemporary items alongside the more traditional products such as snuffbox singing birds and singing birds in cages.

The singing bird mechanism, designed almost two centuries ago, hasn’t aged. The same craftsmanship presides over its production and the work is meticulous and slow, which is why only a few hundred pieces leave the Reuge workshops each year.

Wake up to birdsong every day of the week with two new items from the Reuge workshops in Sainte-Croix, created for autumn 2004! 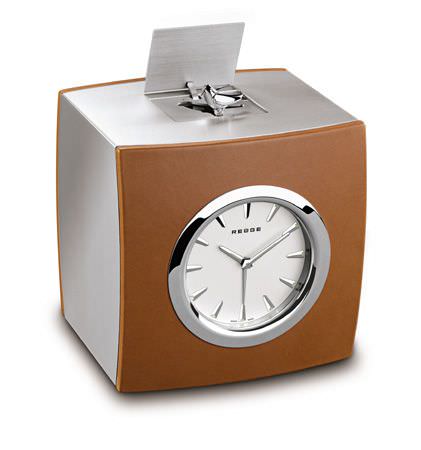 Part of the contemporary “Lounge” range.
Brushed stainless steel adorns a cube-shaped alarm clock, which blends perfectly with the front and rear faces in beige or black leather.
Time to get upı A singing bird comes out of its nest and sings for 10 to 12 seconds before disappearing as if by magic. This small steel automaton flaps its wings, moves its tail and opens its beak in time.
The bird is made up of 25 parts and the Swiss mechanical movement with 8-day power reserve contains over 250 parts, all assembled by hand. Reuge guarantees five days’ operation without winding. 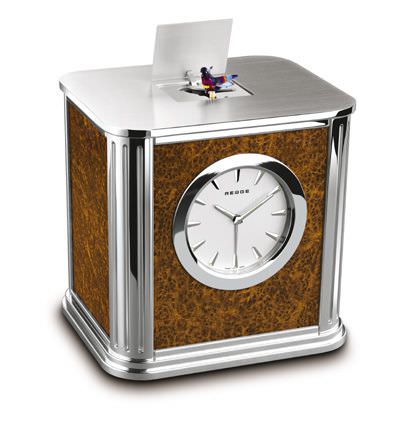 Also cube-shaped, but with front and rear faces in finewood, burr Amboina, instead of leather.
This more traditional bird is made of brass covered with individually applied genuine bird feathers.
It’s a little-known fact that for a 2 cm bird, feathers will be taken from at least 4 different birds to provide contrasting colours. Very few feathers are usable, as they have to be small and flexible, whilst still having a certain strength.
Red, green and blue feathers of the right size are mainly taken from different varieties of hummingbird and tanager, which are 8 to 14 cm in size.
Same operation, movement and dial as the previous model.