SWIZA, is a family story. Founded in 1904, the Swiza Manufacture is one of the Swiss clock and watchmaking companies whose reputation for excellence has been built on rigorous professional ethics in the service of high-quality products. SWIZA has earned worldwide renown as a specialist of quality Swiss table clocks. After the founder, Louis Schwab, his son Pierre senior took the helm of the company, followed by his grandson, Pierre junior. The latter, who has been at the head of the firm since 1979, represents the guarantor of its core values: the constant quest for optimal quality and a proven capacity for innovation.

The founder Louis Schwab immediately specialised in making 1-day mechanical movements and launched the famous popular alarm clock under the LEVTOI brand. This name was soon replaced by the SWIZA brand. The company rose to new heights in 1959 with the launch of the 8-day mechanical movement, before successfully negotiating the shift to quartz mechanisms in 1976.

SWIZA is Switzerland’s largest clock manufacturer. Its artisans perpetuate the tradition of high-quality timekeepers in solid brass, combining cutting-edge machining technologies with a time-honoured finish worthy of craftsmen. In particular, SWIZA is one of the rare “Manufactures” making its own mechanical and quartz movements.

In its modern factory in Delémont (the Swiss Jura region), around 40,000 table clocks, alarm clocks, carriage clocks and movements are produced under its own SWIZA and MATTHEW NORMAN brands, or for prestigious world-famous watch brands.

Building on its past, while resolutely geared towards the future, the third generation of the Schwab family is working with a team of competent young managers in rising to new challenges and perpetuating the creative genius which has made SWIZA so successful. 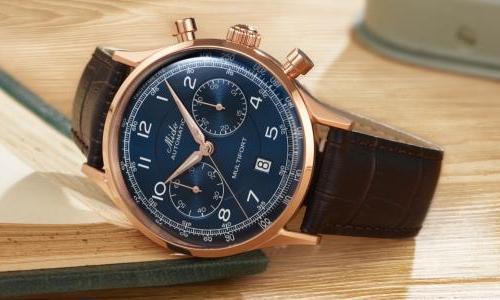 A retro look powered by modern mechanical technology: the Multifort Patrimony Chronograph’s aesthetics reinterpret one of Mido’s oldest and most iconic (...)