Big success and a final that took one's breath away characterized the fourth edition of the Toscana Elba Cup-Trofeo Locman 2005 that - together with the musical event Locman Soul - animated the days and nights of Elba from May 3 to 8, 2005.

Big success and a final that took one's breath away characterized the fourth edition of the Toscana Elba Cup-Trofeo Locman 2005 that - together with the musical event Locman Soul - animated the days and nights of Elba from May 3 to 8, 2005.

On Sunday, the 8th of May the fourth edition of the TOSCANA ELBA CUP-TROFEO LOCMAN took place, the only Italian trial of the Swedish Match Tour, a Sailing World Championship Match Race. The public was numerous, thousands of people gathered on the shore and along the wharf of Porto Azzurro, to attend this spectacular regatta day. The winner was for the second year Russell Coutts (Russell Coutts Team), followed by Peter Gilmour (Pizza-La Sailing Team) and James Spithill (Luna Rossa Team).

Five days of regattas in a picturesque location as is the Porto Azzurro bay. It was possible to follow from near the spectacular challenges among the most appreciated skippers in the world. In fact, the TOSCANA ELBA CUP- TROFEO LOCMAN has among its participants not only the winners already mentioned, but also other outstanding names, such as Ed Braid and Peter Holmberg for Alinghi, Gavin Brady for Oracle and Francesco De Angelis for Luna Rossa. On this occasion there were also Patrizio Bertelli, chief of the Luna Rossa Challenge trade union, and Vincenzo Onorato, patron of the Mascalzone Latino. 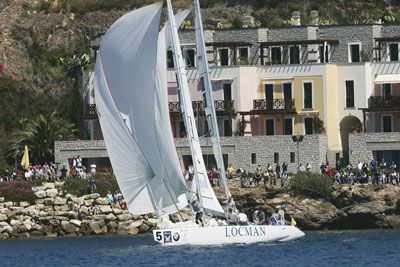 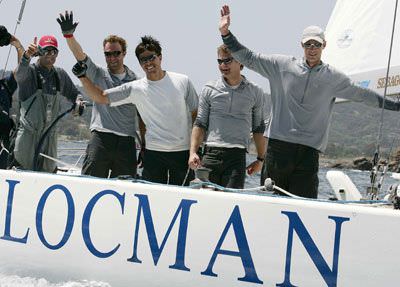 The 2005 edition of the TOSCANA ELBA CUP-TROFEO LOCMAN ended by the traditional prize awarding ceremony that took place after the regatta in the main square of Porto Azzurro. After the performance by the singer L'Aura, a new voice within the Italian musical panorama, the winning teams were awarded prizes by Marco Mantovani consisting of a LOCMAN watch created especially as a limited edition for the Trofeo Locman. A colourful sportsmanlike watch, in carbon fiber and titanium, that expresses the witty, dynamic and tough spirit of the champions.

On Saturday and Sunday, the 7th and 8th of May,the Locman Soul show took place with Italian and foreign artists well known within the world of black music :virtuoso guitar player Joe Colombo, a new star of the blues made in Europe, David Muldoon accompanied by the Boogie Man Orchestra, our singer/songwriter Davide Van De Sfroos who magically melts invention and tradition, and the already mentioned L'Aura, whose performance took place almost at the same time as the appearance of her new album. The patroness of the event was Anna Falchi, a renowned Italian actress, who has been supporting the watches “made in Elba” from the beginning.