“At a time when the Swiss watch industry is breaking records by offering increasingly sophisticated mechanical timepieces, Ventura took the difficult and unusual decision to concentrate exclusively on digital.” With these words, the founder and President of Ventura, Pierre-Alain Nobs, recently presented his new strategy.

“At a time when the Swiss watch industry is breaking records by offering increasingly sophisticated mechanical timepieces, Ventura took the difficult and unusual decision to concentrate exclusively on digital.” With these words, the founder and President of Ventura, Pierre-Alain Nobs, recently presented his new strategy.


This was a surprising – and courageous – decision, as Nobs himself declares: “Digital watches still suffer from a bad image tied to the sale of low quality and low priced Asian models.” How then does he justify digital when we consider that the analogue display, with its two hands, permits the viewer to immediately and easily read, not simply the time, but more importantly, the time ‘remaining’.
Pierre A. Nobs is thinking about the future generations, people who have grown up in the digital age, for whom, on the contrary, “it is the watch’s hands that are abstract, not the numbers.” According to Nobs, the new generations do not really care about the mechanical,” and this lack of interest is an opportunity for Ventura to play a key role in a sector that other quality watch brands have deserted.

Pioneer from its beginnings
Ventura has been playing this key role already for a long time. A pioneer in design (a word that he no longer uses, preferring instead ‘micro-architect’, because “today, design is all over the board. And, it is only skin deep, with no reflection about what is beneath the surface,” he says), Ventura has already given many letters of nobility to the digital display. We need only think of its famous ‘Watch’, designed by Flemming Bo Hansen, that the brand presented in 1990, and which soon became an icon of contemporary styling. Closer to today, in 2000, we can mention the SPARC fx, the only digital timepiece with a hybrid movement at that time. Then there was the v-tech Alpha in 2003, with no pushbuttons and with its ‘easy-scroll’ feature that became a standard.
Because digital watches accounted for 80 percent of the brand’s turnover, Ventura decided to make the all-digital leap. But this decision, accompanied by an ambitious development plan, involved a change of structure, and an increase in its investor base. This was necessary because Ventura wanted to create a veritable ‘electronic manufacture’ with very ambitious specifications.


The only ‘electronic manufacture’
Ventura’s ‘electronic manufacture’ – the only one of its kind – assures the development of user systems and exclusive software needed for its timekeepers, the manual realization of its own calibres, and the assembly and control of its wristwatches.
This product development could not even be conceivable without the active collaboration of the designer, because it is not about ‘styling’ nor appearance, but rather the creation ex nihilo of unique products. They must be immediately recognizable by certain stylistic characteristics, as well as by their classicism, their remarkable simplicity of use, their authenticity, and their strong character.
Pierre Nobs is not trying to make something for everyone, and refuses all compromise. “You will either like Ventura watches or you won’t,” he insists. 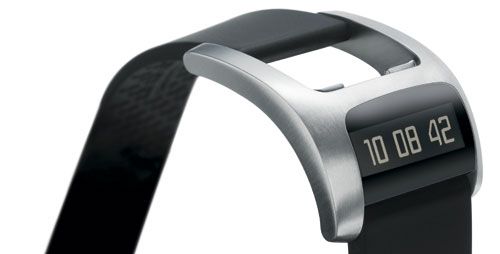 
Code name: Sigma
The new collection, Ventura Sigma, intends to be emblematic of the brand’s definite ambitions. Designed by the Swiss industrial designer, Paolo Fancelli, its goal is to “upset the traditional rules of design, and take full advantage of the opportunities offered by advanced electronics.”
With a very innovative ergonomic design, the new v-tec Sigma model has made a radical departure from the usual appearance of a watch. Its case, if you can call it that and which its designer compares to a ‘volcano’, envelops the wrist and displays the screen (rather than the dial) which permits the viewer a rapid and discreet look at the time. Above, on the conical surface, is the multi-function Easy Scroll command (hour, plus a choice of the date, a second time zone with 0primary or secondary time, an alarm, a chronograph measuring 1/100 of a second for 24 hours, or a countdown function with an audio signal).
With its supple and encircling shape, the water-resistant case is sculpted in hardened Durinox‚ fine steel, and is resistant to scratching (we tested it). The liquid crystal display (whose readability has been improved thanks to a font specially created by Ventura for the occasion, and which comprises a larger number of elements than the seven traditional elements of digital displays) is protected by a sapphire crystal.
This unusual design moves up a notch with the model v-tech MGS (pour Micro Generator System). For this second generation of digital timepieces with an automatic energy source, its hybrid movement has been entirely developed by Ventura. (Earlier the brand used ETA autoquartz movements that are no longer being produced.) The designer fully exploited the possibilities offered by the case’s shape by making the rotor, or micro-generator, visible on the upper part of the ‘volcano’ of the v-tech MGS. We therefore have a unique view of the combination of the digital display and the mechanical rotor. The brand proposes this exclusive timepiece in a Titanox case.
The third model of the collection is the feminine Miss V Sigma. Rather than simply reducing the dimensions of the men’s model, Paolo Fancelli completely re-interpreted its form right from the beginning to make this watch into a feminine accessory. The case is in the form of an elongated H with an opening onto the bracelet and the display on the terminal end. A watch bracelet rather than a wristwatch, the Miss V Sigma is available with a selection of interchangeable bracelets, that range from rubber to snake skin. Equipped with a VEN-05 mechanism, it displays only the date and the time.
With the original ideas, innovative products, and irreproachable quality, time will perhaps confirm that Ventura’s pioneering efforts are on the right track.