A new SuperLigero tourbillon with chronograph inspired by the strongest molecular structure known is unveiled in which nanotechnology, state of the art engineering and inspiration from nature come together to create the FVa Nº Cuatro Tourbillon Chronograph SuperLigero Concept. 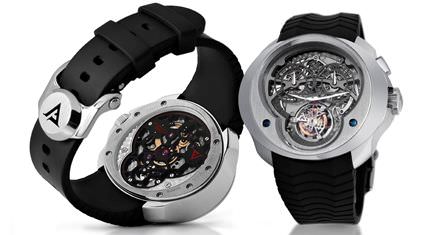 Franc Vila goes a step further with the evolution of his successful FVa Nº Cuatro chronograph tourbillon bringing it into the SuperLigero concept which debuted in 2008. The new movement for the FVa Nº Cuatro Tourbillon Chronograph SuperLigero Concept has also been built in Lightnium, an aluminium-lithium based alloy used in state of the art aeronautical engineering. Its main characteristics are lightness combined with high-tensile strength, allowing structural weight reduction and an increase in the elastic modulus. These characteristics allow for the development of very robust movements. While light and with low density, it is rigid enough to stand up to the stresses of the gear train, barrel and tourbillon which ensures perfect performance. The lightness of this new material also means that the movement is less affected by inertial forces.
The structure of the bridges of the movement have been inspired by the molecular structure of graphene, a recently discovered material, which being just one atom thick, is six times less dense than the best steel and can be between 10 and 100 times stronger. The molecular structure is so strong that it could be used to build a space lift, as it is the only known material able to support its own weight infinitely. In the quest for an extremely light, sporty, shock and stress resistant movement, Franc Vila has brought the advances of nanotechnology to the new FVa Nº Cuatro Chronograph Tourbillon SuperLigero Concept, translating the hexagonal nanostructure of graphene to the micro-world of Haute Horlogerie.

The timepiece
The FVa Nº Cuatro Chronograph Tourbillon SuperLigero Concept encompasses all the innovations already present in the FVa Nº Cuatro, such as its column wheel monopusher chronograph directly coupled to the tourbillon cage. The mechanism for the chronograph function in the movement is placed in the dial side, a highly complicated structure which gives the movement a stunning visual appearance on the dial side, where the action of the movement is perfectly visible with every push of the chronograph button. From the back, the hexagonal structure of the movement is reminiscent of the world of motor-sport and of natural structures which have inspired architecture for decades.
The watch case is in DieHard Extreme Steel in a special ‘Esprit Unique’ shape with elliptical and circular bezel. There is a sapphire crystal front and back with double sided antiglare treatment. The movement is an FV Nº Cuatro SuperLigero calibre with 262 components. It has a 120-hour power reserve and the chronograph monopusher at 2 o’clock functions with dial side column wheel, directly coupled to the flying tourbillon which has an ‘inertial moment control’ mechanism and wheel differential system. The handmade and hand-decorated mechanism is manufactured in the brand’s characteristic ‘Esprit Unique’ shape. The functions are hours, minutes, chronograph counters for 60 seconds at 2 o’clock and 30 minutes at 10 o’clock functioned by a monopusher and a power reserve indicator at 9 o’clock.