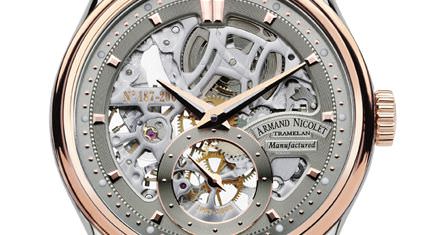 One of the reasons Rolando Braga acquired Tramelan-based Armand Nicolet was the huge stock of vintage movements in the brand's storeroom. After many years of training watchmakers and working on these vintage movements, Braga began releasing limited edition watches featuring these reworked movements. These special watches have been so well received that these limited editions have become one of the pillars of the Armand Nicolet brand.
This year, Armand Nicolet introduces two new limited editions, the LS8 and the L08. Both these limited editions feature manual wind mechanical movements created with original components from 1957, modified and updated by the factory. The LS8 is limited to 600 pieces, while the L08 is limited to 500 pieces, more or less the number of original components from 1957 available (a percentage of components are held out for after sales service reasons).
The movements have been integrated with the Incabloc shock absorbent system and the Swan Neck adjustment mechanism. The LS08 is skeletonized and decorated with CÔtes de GenÈve finishing and perlage. The L08 is partially skeletonized, utilizing windows into the movement, showing the balance, lever, time-setting and winding systems.