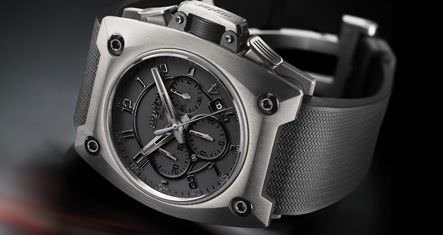 Wyler Geneve is introducing a new Code-R Chronograph in BaselWorld this year, the Night Racer version.
Inspired by the first-ever Formula 1 night race last year in Singapore (one of the brand’s biggest markets), the Night Racer Chronograph uses the Wyler signature shock-absorbing system, made of a lightweight but highly resistant carbon-fibre resin frame that holds in place a titanium container inside which the movement is sealed. The two brushed titanium plates of the case are fixed to this assembly in a sandwich-like construction by four sprung-mounted titanium screws, leaving the entire watch movement and dial suspended within the case and thus able to absorb shocks. The screws are DLC-coated in black to match the polished black applied numerals of the dial and to highlight their functional – rather than purely aesthetic – purpose.
Fans of motorsport will appreciate the attention to detail of the design, with chronograph pushers in the style of a car’s foot pedals and the grooved rubber-coated crown that resembles a racing tyre.
The dark, tone-on-tone dial of the Wyler GenÈve Night Racer Chronograph is very subtle during the day, but at night the black SuperLuminova on the hands and minute track numerals is extremely visible. The Night Racer Chronograph is fitted as standard with a black rubber bracelet with pushbutton-operated fold over clasp in steel and titanium. As with all Wyler GenÈve models, it comes with a 2-year warranty.