Jimmy Olmes, president of Southern California-based Reactor, maker of one of the world’s most durable and progressive sport watches, was recently gifted with a handcrafted knife, created expressly for him by members of the 5th Group Special Forces Unit in Iraq.

A token of appreciation for Reactor’s support of U.S. troops in the Middle East, the one-of-kind knife was presented to Olmes by TV personality Joe Mercurio. The host of the “Professional Tarpon Tournament Series” television show, and organizer of “Operation: Catch Fish” brought the heartfelt gift home from Baghdad after participating in Operation Catch Fish 2009, of which Reactor served as the official timing sponsor. 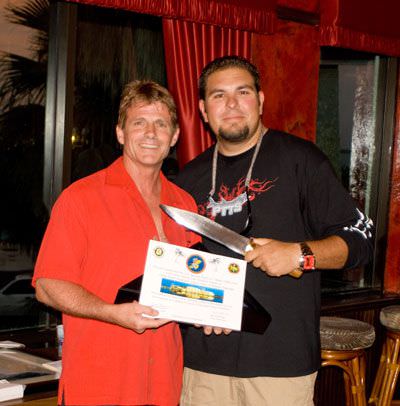 Now in its second year, the fishing tournament enlists U.S. military personnel to compete in bass- and carp-stocked manmade ponds around Saddam Hussein's former palace. Each of this year's tournament's 450 participants received a pair of Costa Del Mar sunglasses or a Reactor watch.