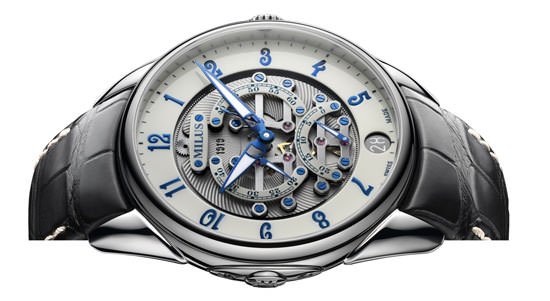 The name of the Tirion is derived from the constellation of Orion, one of the most easily recognizable and brightest in the heaven. The exact rhythm of the retrograde seconds function in three sectors of 20 seconds each is given by a Swiss quality mechanical movement in an exclusive special version with automatic winding. Just as unusual and rare as the TriRetrograde function is the unique dial, which is placed in the round, nine-part impressive case of 45mm diameter. It is built up of two layers: the first one is the movement base with a sun-stamped decoration. 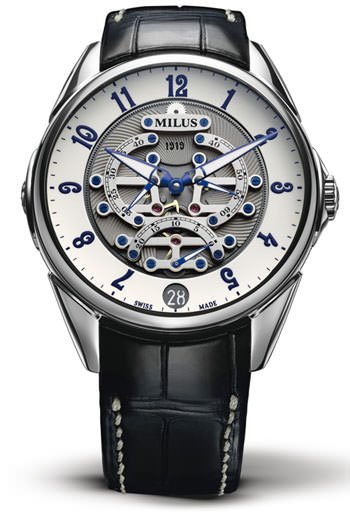 The second level consists of an off-white dial plate with blue Arabic numerals. Positioned at 6 o’clock, the large date is displayed to its full advantage. The composition of the three seconds display sectors is of eye-catching design: skeleton hours and minute hands constantly allow a view of the three blue seconds hands that jump back in 20-second rhythm.

Starting at 6 o’clock, the first hand jumps instantly back to the right to its starting position after 20 seconds. Going clockwise, the next seconds hand at 9 o’clock followed by the third at 3 o’clock take over the same task. This alternation tirelessly repeats itself, giving the overall impression of a magic dance performed by the seconds hands.