The Schaumburg Watch Grand Perpetual MooN is a high-tech mechanical moon phase watch with a patented luminescent display that depicts the moon’s cycle in the northern and southern hemispheres in a photo-realistic way. This astronomical moon complication has a maximum divergence of only one day in 122.5 years.

Lunar watches are seeing a recent renaissance. The realistic depiction of the MooN with its 13.4 mm is one of the world´s largest moonphase chronometers that can be found in an automatic watch. It doesn’t depict the moon itself, but shows a simulation of the earth’s shadow. Therefore the moon stays visible like in a starlit night even when there is a new moon. Equally important as the decade long precision of the chronometer, Schaumburg also considered the up-to-the-minute adjustment of the moon phase on the dial. 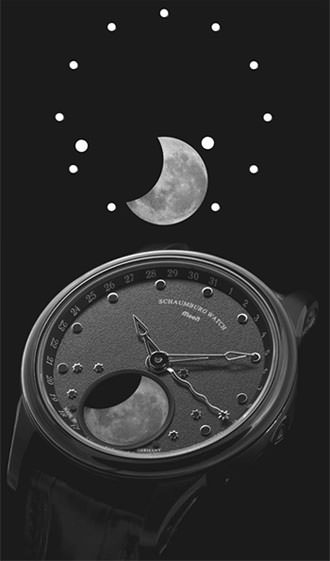 The dial itself is available in four variations: Black, white, cloisonné enamel designed with the signs of the zodiac or even with a real meteorite dial whose material originates from a desert region in Gambia.

The case is 43 mm in size, conical at the bottom and has well-formed lugs for 22mm straps. The band attachments are also screwed in, as is the massive case back.