Less than two years after the presentation of the first ARM09 Manufacture movement, the young team from Armin Strom is already introducing another watch with one of its own movements.

The manual winding AMW11 (ArminManualWinding 11) calibre cannot deny its origins. This timekeeper also incorporates the famous watch craftsman’s tradition of movement refinement and gives it a modern interpretation. The partly open dial reveals the inner workings of the movement and the beauty of its technology. 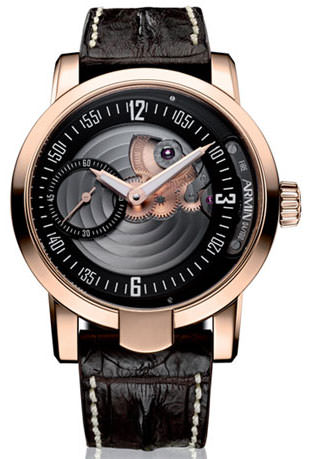 An unmistakable feature of Armin Strom watches is the time display: the hour and minute hands are not centrally positioned, but slightly off-centre horizontally. The designer’s objective was to create an exclusive watch with a Manufacture calibre at an extraordinary price. This watch is available in four different models, corresponding to the four elements Water, Air, Earth and Fire. Each model is being produced in a series of only 100 pieces.