Whereas LeDIX Origine featured a distinctly watchmaking-oriented design, LeDIX Véloce asserts its references to the world of motor sports. The flowing black shade of the movement highlights the aerodynamic nature of its lines, while the new blackened titanium and carbon fibre casing radiates a blend of power and velocity. Like a high-powered racing car, stemming from a combination of cutting-edge innovations and avant-garde materials, LeDIX Véloce continues to push the limits of communication. 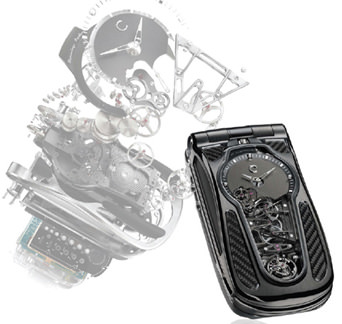 After LeDIX Origine in natural titanium with ebony inserts, LeDIX Véloce comes in black PVD-treated titanium featuring carbon fibre inserts. Entirely in harmony with the black gold finishes of the watch movement, this new all-black version highlights the beautifully sleek lines forming a profile resembling that of a racing car hurtling around a track at full speed. 35 engineers, watchmakers and other artisans are involved in creating this prestigious nomadic object, and it takes six months to produce just one.

LeDIX Véloce, which is issued in an 18-piece limited series, is available as of October 2011.