Audi Italia Sailing Team, supported by Eberhard & Co. and skippered by Riccardo Simoneschi, took part in the Melges 24 Austria Cup event with the objective of testing its potential in view of the world trial, and resulted the undisputed protagonist with 8 race wins. The race was valid for the European and Worldwide lists rankings, and was organized by the Kammersee Sailing Club on Lake Attersee. 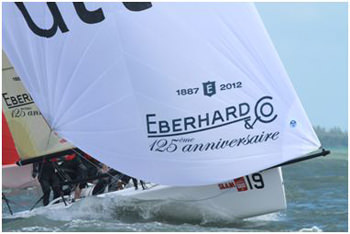 “It’s a great result – comments Mario Peserico, General Manager of Eberhard & Co. – that reinforces our confidence in the strength of the team we support, and lets us hope for positive outcomes at the next trials.”

The talented Audi Eberhard team that participated in the Attersee event was composed by the helmsman Riccardo Simoneschi, the tactician Gabriele Benussi, the trimmer Vittorio Rosso, the pitman Federico Buscaglia and the bowman Lucia Giorgetti.

The Audi Italia Sailing Team supported by Eberhard & Co. has left no space to its opponents, closing its trial with the minimal regulation score (seven points in 8 races) and a one-minute gap. Second and third on the event’s podium the German team of Markus Wieser on AEZ BMW, direct opponent of the Audi Eberhard boat, and the Czech crew of Martin Trcka.

With the Melges 24 Austria Cup archived in its palmares, Audi Eberhard is now looking at the next events, mainly the prestigious Kieler Woche (June 16 - 24) and the longed-for Torbole World Championship on Garda Lake (July 30 – Aug 4), a must for all the serie’s boats.