Should Icelanders continue practicing their Nordic Pantheism (Asatru), or should they become Christian? That was the difficult issue facing the members of parliament during a session in 1000 AD. Just as the discussions had reached fever pitch, news of fires and lava headed towards the homestead of Snorri, one of Iceland’s most respected citizens, was reported. The pantheists immediately pointed out that the eruption was obviously happening because the gods were upset with these proceedings and the discussion of religious conversion. Snorri then questioned, “What angered the gods when the earth burned where we now stand?” No one could come up with an answer to this question and this led to Iceland’s peaceful conversion to Christianity.

A long time before this momentous decision, stories were told of a group of Irish priests, Papar, that already inhabited Iceland by the time of the Vikings’ arrival about twelve to thirteen hundred years ago. The Papar wanted to live a solitary life, a life where they could practice their faith away from the distractions of the world. To reach peaceful lands, they would sail long distances in their rawhide boats. They described Iceland, or Ultima Thule as they called it, as a fertile land with summer nights so bright that one could pick lice off of one’s shirt during the night as well as the day. The Papar came from long settled lands where the earth was still and cultivated. They must have been amazed by this young island where the earth shook, spurting out ash, lava, and hot water. Or, this might have fit perfectly into their world view where sinners should be forever burned by fire in Satan’s netherworlds.

This young, active island became a haven for Vikings who left Norway to escape the harsh rule of King Harald Fairhair (Haraldur Harfagri) looking for new places to settle. Just like the Papar before them, they were most likely surprised by the earth’s constant rumblings. When travelling across the mountains, they would have seen barren fields of lava, ash covered hills, and plumes of white smoke from geysers. The contrast of the fire and ice would have perplexed these early settlers who believed that only those who died of old age, sickness, or as a coward were sent to the underworld of “Heljar”, a place covered in snow and ice. The settlers would eventually have been forced to adjust their faith to rationalise the fire, shaking ground, and loss of human lives and livestock. Then there was the ash. The fine, minuscule dust that the volcanoes churned out in massive quantities. The effects of the falling ash were devastating, leaving dead animals and suffering farmers in its wake. 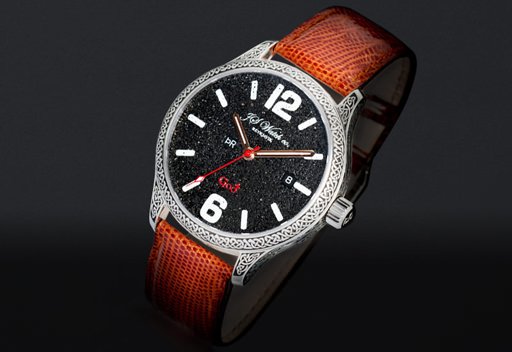 In 2010, the volcano Eyjafjallajokull turned the whole world upside down by discharging incredible amounts of ash into the sky. The gigantic ash cloud was blown over into mainland Europe stalling airline traffic for days and days. People from all over the world were now affected by Icelandic ash, just as the Vikings had been centuries before. Just as people were beginning to forget and to forgive our small island nation for the eruption and its resulting disruptions, another volcano began erupting. This time it was one of Iceland’s most active volcanoes, Grimsvotn. Even though the airline industry had learned some difficult lessons the year before, this eruption still caused disruption. 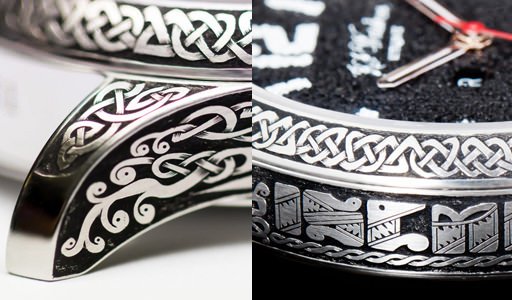 Engraving on the case of the JS Watch Co. Friesland God Special Edition

JS Watch Co. first used the ultrafine ash from the fall-out from the Eyjafjallajökull eruption as an unusual decoration on the dial of its Frisland God model, which was first introduced in 2011. The ash is also used in the new Frisland God Special Edition model, which features a unique hand-engraved 42mm case in stainless steel. The engraving uses the unusual Icelandic font (called “Höfðaletur”, or “Head Letters”) that has been used historically to adorn items made of wood, horn and, later on, metals. Since the watch is only available by custom order, the customer can choose their own personal text for the hand engraving on the case middle. 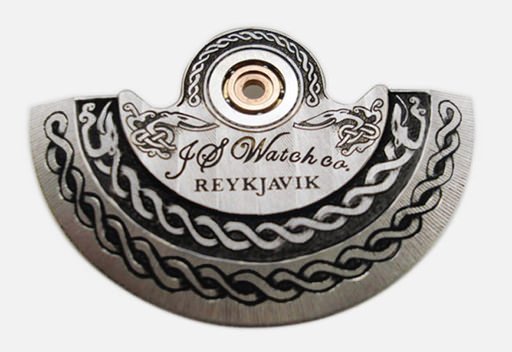 A self-winding mechanical movement with a chronometer-tuned assortment powers the Frisland God Special Edition, which has a 38-hour power reserve. A transparent sapphire crystal case back reveals a continuation of the hand-engraved décor on the self-winding rotor.