The Artya Son of a Gun collection

The Artya Son of a Gun collection

After presenting a black and steel edition of its “Son of a Gun” model, which features real bullets as its dial, at this year’s BaselWorld show, Artya has now introduced an entire collection based around this usual theme, which has obviously found its aficionados.

The new collection includes models that use the highly distinctive case that was already presented by the brand for previous models - stainless steel that has been transformed almost beyond recognition by being struck by real lightning bolts generating anywhere from 100,000 to 1 million volts. A new bronze model is also available.

A different number and shape of bullets is used in each model, making each piece unique. Furthermore, sawn off cartridge ends from a .357 Magnum bullet are used as ballast on the watch’s self-winding rotor. 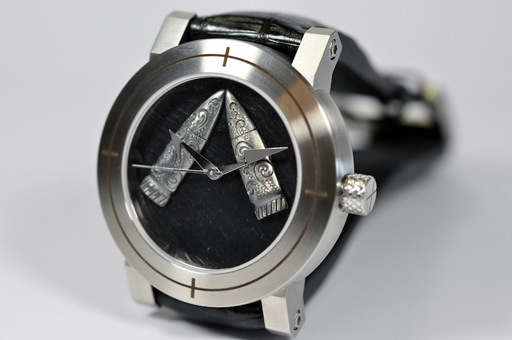 The ArtyA Son of a Gun “Werewolf” model

By far the most intriguing among the new models, however, is the “Werewolf”, which, if the accompanying documentation is to be believed, offers unparalleled protection not from water or shocks but against vampires and werewolves!

This model has on the dial a cut-up silver bullet, which has been forged during a full moon night and engraved by a world famous engraver. Apparently, garlic was rubbed over it for good measure to improve its effectiveness against the demons.

Artya have thus created not only a talking piece, but possibly a smelling piece, too.