Union Jack, the iconic British flag, generates a statement of hip fashion on any stylish accessory. With London hosting the 2012 summer games and the recently concluded Queen Elizabeth’s diamond jubilee celebrations, Britain and the Union Jack are once again the ultimate fashion statement that has won every fashionista’s applause. 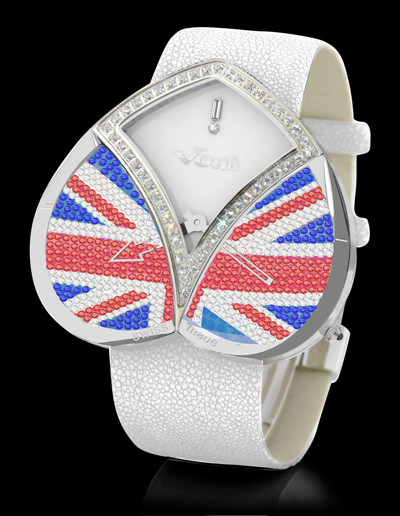 For Roger Khemlani, Founder & Creative Director of the house of Voilà, the Union Jack in his Brit Wooman collection has a deeper meaning. July 1st marks the 15th anniversary of his home island, the former British colony of Hong Kong, reverting back to Chinese rule.

To celebrate this occasion, the House of Voilà has most appropriately released the Brit Wooman. Set with a Union Jack theme pave dial and a genuine Galuchat leather strap, the Brit Wooman is Voilà’s tribute to the hip women of Hong Kong, Britain and the world.

“Prior to 1997, the Union Jack fluttered on every major landmark in Hong Kong, today we don’t see enough of it. As an ode to our colonial past, Voilà’s Brit Wooman is being released just in time for the London Olympics”, says Roger Khemlani.