In order to showcase the different lighting functions of its 2012 Night Vision models, Victorinox Swiss Army has organized a series of travelling exhibitions and has created a dedicated website for the collection.

The Night Vision, which was first created in 2003, has been entirely redesigned this year. It offers an illumination system that uses low-energy-consumption light-emitting diodes (LEDs). These are discreetly incorporated into an extension of the case or into one of the central links of the bracelet on the metal versions and, at the touch of a button, provide different light functions.

One brief press activates a blue LED that lights up the dial for optimum legibility of the time display. Two presses activate a white LED, which creates a continuous beam of light visible up to 1 kilometre away. Three presses start the stroboscopic mode, a flashing signal with long autonomy – 7 days and 7 nights – that acts as an emergency beacon and can be converted into a high-intensity signal by pressing and holding down the pushbutton. A red pilot light makes it easier to find the watch in the dark and a battery end-of-life and protection device completes these built-in light modules. 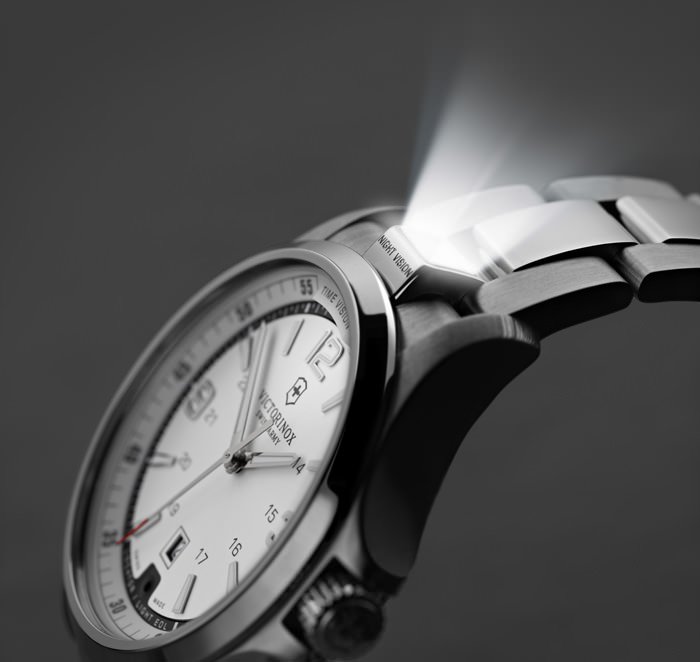 The dedicated website nightvision.victorinox.com, which is officially inaugurated today, allows users to explore the Night Vision watch and offers a detailed, interactive description of the collection. It will also list all the events organized worldwide to present the Night Vision watch, namely travelling exhibitions demonstrating its numerous lighting features and giving enthusiasts a chance to test them in variable light conditions. Website visitors will also have the chance to participate in a monthly competition to win a Night Vision watch from November 2012 to March 2013, as well as a prize draw to win a trip to Switzerland to explore the geographical and cultural origins of Victorinox Swiss Army. The website will also be enhanced with testimonials submitted by people who have already experienced this multifunctional watch. One such example is the from a German team, sponsored by Victorinox Swiss Army, which took part in the recent Siberian Black Ice Race, a 610-kilometre expedition carried out on foot and skis over Lake Baikal. In temperatures that sometimes fell to -40°C, it helped competitors Michael Snehotta, Tobias Altmann and Dominik Luksch to respect the strict time guidelines provided, a vital precondition for success in any such venture