It is the turn of Century to pay tribute to the bird, with an innovative new creation that captures a sense of flight and freedom: Wings of Time. With this watch, passing time is transformed into a bird that takes flight every time the watch is viewed... 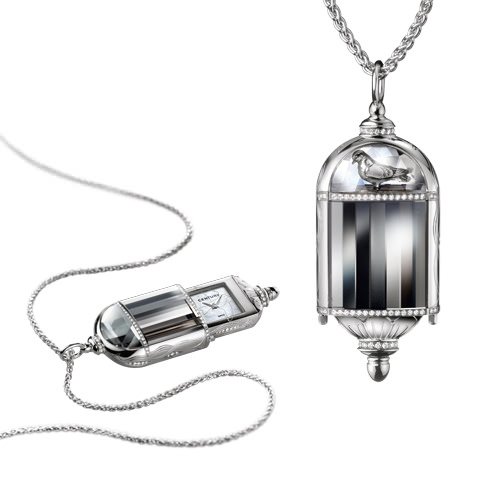 To achieve this melodious treasure, Century drew on the imagination and creativity of its master craftsmen. They came up with the concept of a golden cage in an Art Deco style, featuring four opening windows in Century sapphire, the legendary material that issues from the Century workshops, cut and polished entirely by hand. Visible from every side of the dome, through the facets of the transparent Century sapphire, the elegant profile of the bird, engraved by hand in gold, forms a harmonious contrast with the sumptuous ornamentation of the cage, whose richly interweaving lines merge with the dazzle of dozens of brilliant-cut diamonds, painstakingly set one by one. 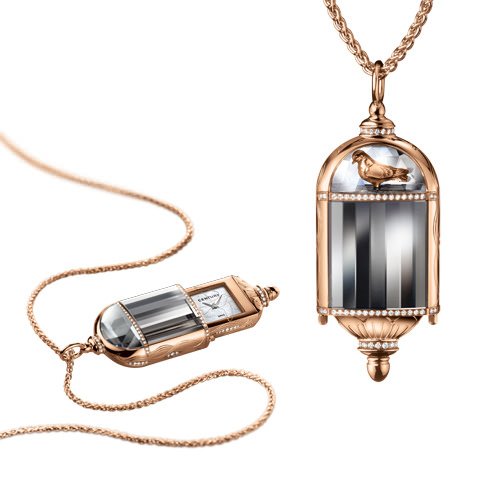 By gently pulling down on the piece, the dial and the parts surrounding the movement glide majestically from the cage. At the top, the immobile bird has mysteriously vanished: it has taken flight into the refined space around which the hours and minutes hands travel. Freedom is rediscovered in every instant; passing time is transformed into the promise of happiness to come and new horizons to be discovered.

This watch is doubly precious, both for its materials and for the message it conveys.

Wings of Time is available in 18 ct. white gold or red gold.