After two years of development work, a project started by George Daniels together with his erstwhile apprentice Roger W. Smith now comes to fruition with the deliveries of the first George Daniels Anniversary Watches.

Unfortunately, the watches were not completed before the great watchmaker’s passing, but they will live on as a lasting tribute to the pioneering achievements of George Daniels, the most memorable of which is undoubtedly the co-axial escapement, which has found mass-production appeal in Omega’s manufacture calibres. 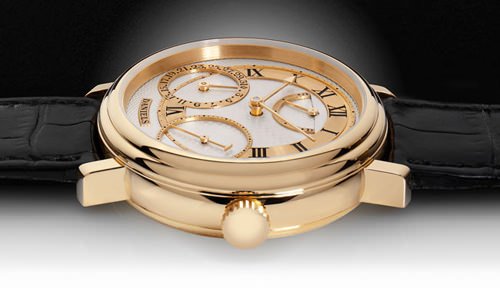 Indeed, the Anniversary Watch marks the 35th anniversary of Daniels’s invention of the co-axial escapement, which considerably reduces the sliding friction within the escapement and thus considerably improves the precision and reliability of the watch movement as a whole.

Equally important is the fact that this new collection is the first series of handmade wristwatches to be offered to the public that feature a movement designed by George Daniels and manufactured on the Isle of Man.

The models, appropriately limited in production to 35 pieces, feature the unmistakably understated George Daniels design signatures, such as an arrowhead hour hand and eccentric circles on the dial, but also hide personal touches by Roger W. Smith, who made his own improvement to Daniels’s co-axial escapement design by using a single wheel (in Daniels’s original co-axial escapement, a separate co-axial pinion is used on the escape wheel). 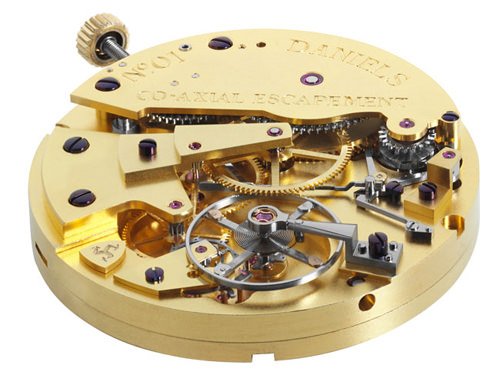 The co-axial escapement movement in the George Daniels Anniversary Watch

In order to further improve the precision offered by the co-axial escapement, the free sprung balance and the relatively low frequency of 18,000 vibrations per hour (2.5 Hz), the power reserve in the movement has also been restricted to 36 hours in order to use the “premium portion” of the balance spring.

The case and dial of the watch are handmade in 18-carat gold in keeping with Daniels’s tradition, while sapphire crystal is used on the case-back in order to display the movement. Each finished watch has its aesthetics and accuracy inspected personally by Roger Smith before being subjected to a two-week on-the-wrist test before final delivery.