You can already purchase a watch that uses GPS to track your location. Other currently available smartwatches use miniature accelerometers to track your workouts and other physical activity. The problem with these first generation smartwatches is that almost everybody already has a watch. Today’s smartwatches are very specialized and don’t add much functionality to traditional timekeeping.

An Apple iWatch might change all that. The Apple infrastructure already includes thousands of innovative apps that add impressive new functionality to your phone, tablet, and computer. Just imagine if you could access these apps on your wrist. Using Bluetooth and the cloud to communicate with other devices, an Apple iWatch could be a game changer.

Some of the most useful applications for this new watch might have nothing to do with timekeeping. Imagine a watch that could eliminate the frustration of passcodes in an office environment. An iWatch could eliminate the necessity of entering your passcode ten or twenty times a day. With the addition of fingerprint recognition on the touchscreen, the watch could easily establish your identity in a variety of situations. 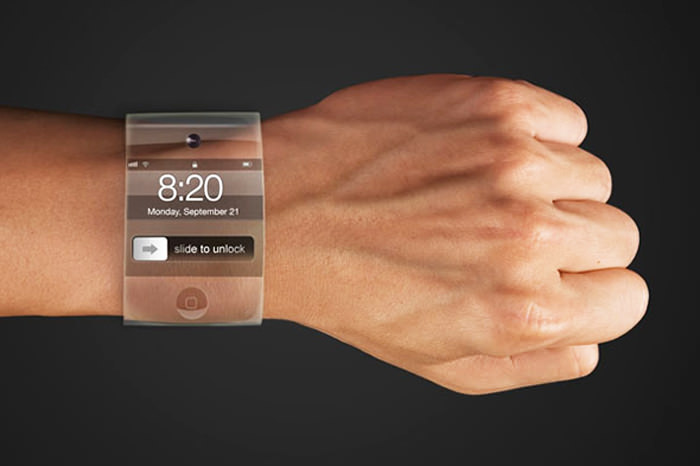 Do you frequently lose your phone? Just use your watch to find it. How about paying for gas just by waving your watch at the pump? Apple’s Siri technology could make it easy to communicate with your watch without using a keyboard. Even traditional timekeeping functions could be improved using smartwatch technology. Your iWatch will probably change time zones automatically for you while you travel. As Apple continues to improve its Passbook payment technology, your watch might even know when you’ve boarded your plane and where you’re going.

What will this amazing new watch look like? Nobody knows for sure, but with Apple’s design expertise, chances are that it will be spectacular. Many people think that an iWatch will incorporate Corning’s new curved glass technology, using a band of flexible curved glass that wraps around your wrist as a display.

When can you expect to see an iWatch on the market? Nobody knows. Many people think it would be wise for Apple to get on the smartwatch bandwagon as soon as possible though. The Bluetooth enabled Pebble smartwatch is already available and Sony already markets a smartwatch that works with Android smartphones. Do you think it’s time for an Apple watch? We may soon find out if Tim Cook agrees with you.