Uwe Staib, of Hermann Staib GmbH, has been elected as the new President of the Federation of German Jewellery, Watches, Clocks, Silverware and Related Industries “BV Schmuck + Uhren”. 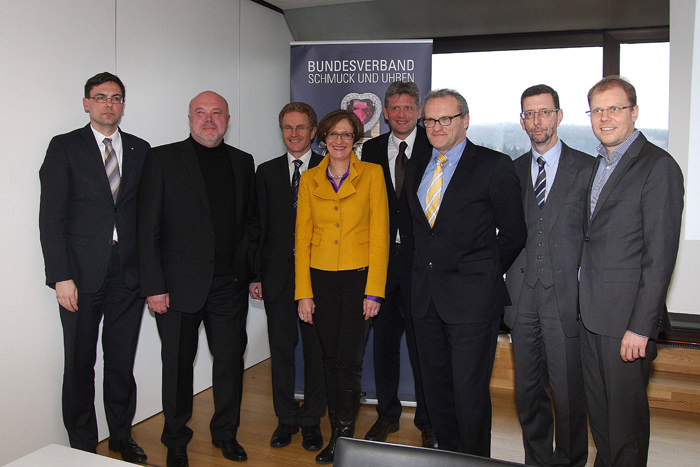 Dr. Philipp Reisert, C. Hafner GmbH & Co. KG (Pforzheim) gave a retrospective of his eventful decade in office, during which the watch and jewellery industry underwent many changes due to the change of structure. Uwe Staib thanked Dr. Reisert for his untiring commitment and said he was looking forward to the co-operation within the new presidency. Its composition guarantees continuity and strength of the three fields Jewellery, Watches & Clocks and Related Industries.

General Manager Thilo Brückner delivered a concentrated glance back at the past business year and reported about the various activities of the BV Schmuck + Uhren in national and international fields. He pointed out the multiple activities on trade fairs, mentioning also professional assistance, consultation in wage agreements and legal actions.

Vice president Karina Ratzlaff, also President of the Union of Federal Associations of German Jewellery and Silverware Trade, informed about the activities of CIBJO (Confédération Internationale de la Bijouterie, Joaillerie et Orfèvrerie) - the World Jewellery Confederation. That organization is enlarging its activities to the benefit of the members and deepening international co-operation in such important subjects as security in the jewellery and watch business.

The general meeting was enriched by a highly topical lecture by Carsten Fritsch, analyst in the field of raw materials, of Commerzbank AG. He spoke on the subject “Rise of gold price – postponed is not cancelled”, examining more closely various factors of influence on the gold price.