Although Nicolas Rieussec is credited as the inventor of the forerunner to the modern stopwatch, or chronograph, it is the patent filed by Adolphe Nicole in 1862 that is the first example of what corresponds most closely to the modern chronograph.

Or it did until today, when Louis Moinet presented a remarkable discovery that confirms the French watchmaker as the true inventor of the chronograph. Whereas Rieussec’s invention was more of a “time writer” that dabbed a drop of ink on rotating discs to record elapsed times, primarily for horse racing, Moinet’s timepiece is a genuine chronograph housed in a watch case, featuring a central seconds hand, elapsed time counters and a reset mechanism. 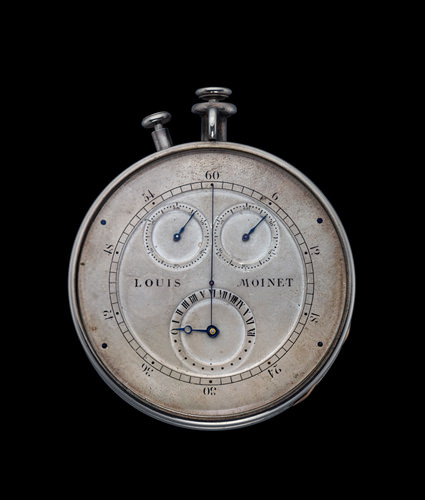 Hallmarks on the inside of the case indicate that work started on the piece in 1815 and finished a year later. Thus, Moinet’s chronograph, which he called the “compteur de tierces” [counter of thirds] predates what was previously thought to be the first chronograph by around half a century. But that is not all. The remarkable movement used in this chronograph beats at an astonishing 216,000 vibrations per hour (30 Hz)—a frequency that was unheard of at the time and would not be seen in watchmaking for another hundred years. On top of this, because Moinet had designed this chronograph for his own use, in order to make precise calculations for his astronomical observations, such as the passage of stars, the mechanism had to be able to run continuously for at least 24 hours and therefore has a power reserve of some 30 hours. 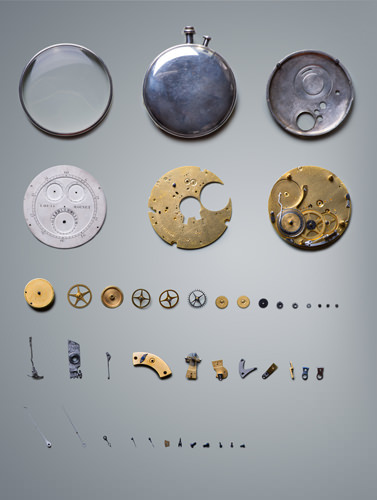 The components of the Louis Moinet chronograph from 1815

The movement also uses a fusee and chain system, an invention that is currently experiencing a resurgence as a means of ensuring a constant force transmitted to the foliot balance, which is fitted with platinum adjustment weights. It even has a state of wind indicator as a means of showing the power reserve through an aperture in the dust cover. The only way in which this invention differs from a modern chronograph is that the start/stop button must be held in place for extended measurements. 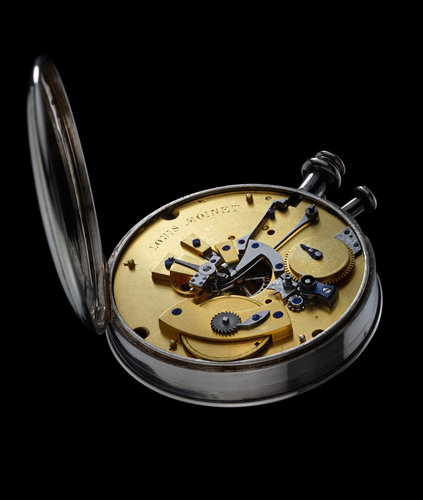 We can only speculate as to how this unique item and its significance to the history of watchmaking has remained undiscovered for so long. But congratulations to Louis Moinet for taking the time to research fully the background of this chronograph, which it presents in this excellent video: