Detroit, Michigan, USA is the home of the USA’s Big Three automakers – Ford, General Motors and Chrysler. Severely punished by the financial crisis and the recession, Detroit is undergoing a revival, with new companies sprouting up across the city and region.

Shinola is an iconic American company, famous for shoe polish in the early 1900s. To capture the vintage nature of its products, the new company adopted the Shinola brand name and the products (watches, bikes, leather goods and journals) are inspired by the best designs from the past.

Why Detroit?“Part of picking Detroit was that we were assembling the engine of the watch and what better place to be than in the heart of the auto industry, where so many engines have been produced?” says Heath Carr, CEO, Bedrock Manufacturing. “We knew we wanted to make our products in the USA and now we have just over 25 people working in the Detroit factory today, and we have a capacity to assemble over 500,000 watches a year.”

The factory has been up and running for six months now, and full watch production is set to begin this month (April 2013), with the watches ready to ship in July of this year. Ronda’s main role in the project was to set up the factory in Detroit and train the employees, as well as to provide the movement parts. According to Carr, Ronda ships all the components to Detroit, where the watches are assembled, cased and quality controlled. 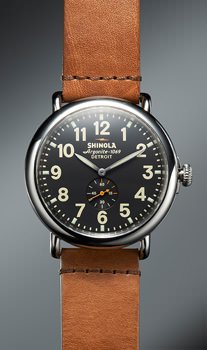 “The Shinola brand needed to have a differentiator and having a movement that was assembled in Switzerland or Asia wasn’t going to be different enough,” Carr explains. “‘Built in Detroit’ is on the caseback of all our watches and I think people will make a connection with it.”

Shinola’s manufacturing facilities are housed in the historic Argonaut building in Detroit, the original GM facility that is now part of the College for Creative Studies, and the name given to Shinola’s first movement is Argonite-1069, a derivative of Argonaut. Its website, www.shinola.com, even includes charming little bios on its workers, all hired from the local area.

On all Shinola products is a yellow lightning bolt, something which is meant to represent high quality. “Every time we see it, and our partners see it, it’s a reminder to focus on the quality of the product,” Carr adds.

The watchesThe first watch collection debuting is the limited edition Runwell, a vintage-inspired three-hand timepiece with a small subdial for the running seconds. The individually numbered Runwell is available in two sizes, 47mm (1,000 pieces) and 40mm (1,500 pieces). These first two Shinola watches retail for $550, but Carr says that the range for Shinola watches will be $500 - $800, depending on the model, and will be all quartz to start. Carr isn’t ruling out mechanical watches in the future, but he acknowledges the leap in difficulty that making mechanical watches on an industrial level in the USA represents.

Other productsIn addition to watches, Shinola is introducing bicycles, leather goods and journals. “We want to be in many different categories,” says Carr. “We decided to tackle the most difficult ones, watches and bikes, first.”

It will be interesting to keep an eye on Shinola. With a great looking design for its first watch collection, and Kartsokis behind the idea, Shinola certainly has a real chance to succeed.

Shinola was so popular in the early 1900s that it became part of the American lexicon, with the phrase “Doesn’t know sh*t from Shinola” (meaning a person is so dumb he doesn’t know the difference between feces and shoe polish. Another similar, watch-related phrase is “He doesn’t know whether to scratch his watch or wind his ass.”)