Bremont Watch Company won “Luxury watch brand of the year” for the second year running as well as winning “Store design of the year” at the 2013 UK Jewellery Awards which took place for the first time at The Natural History Museum and were hosted by Dawn Porter.

Co-founders Nick and Giles English said: "It’s a total honour to be recognised by the industry as a whole, especially when you consider some of the established brands we were shortlisted with. To win both Store Design and Luxury Watch Brand of the Year at this year prestigious Jewellery Awards was overwhelming. We owe a big thanks to the judges for backing Bremont. This also couldn’t be achieved without the incredible support from our retailers, the press and our dedicated team, who on a daily basis, work tremendously hard to continue to allow Bremont to push the boundaries within the watch industry and help define us a brand" 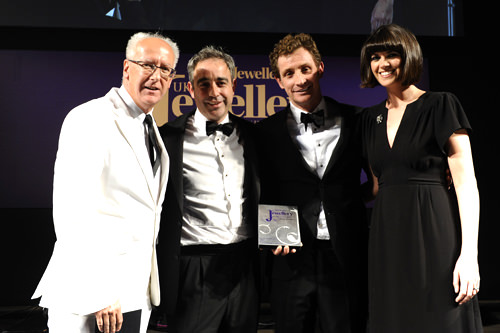 Bremont launched their flagship store last July in London’s Mayfair which features a library, its very own bar and special pieces on display such as the bespoke Ships Clock by Ronnie Wood. The boutique also hosts a monthly explorer’s club.

Bremont has had an exciting year including the opening of their new watchmaking facility in Henley on Thames, launching their new limited edition watch which incorporates artifacts from Bletchley Park, the Codebreaker, as well as recently beating thousands of brands to win the HSBC Global Connections award for interesting and innovative young British companies.