Hong Kong based Vo!la follows up on the Brit Wooman piece it launched last year to coincide with the 2012 London Olympic Games with a new Desi Wooman model inspired by celestial maidens, known as Asparas, which can be found in ancient carvings in caves dotted across the Indian subcontinent. 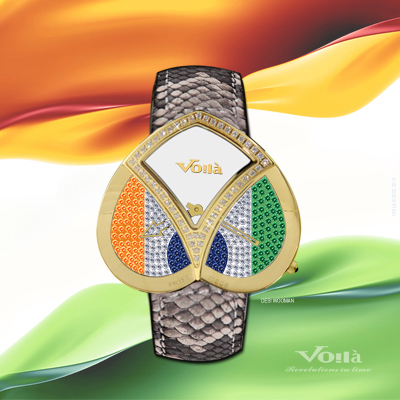 The watch, with its distinctive inverted heart shape and stone setting, features the Indian tricolour and its launch today, on India’s 67th Independence Day, is therefore appropriate. “Desi” is an Indo-Aryan Sanskrit term for the people, cultures, art and crafts of the Indian subcontinent.

It also carries a serious message, as Roger Khemlani, the founder of the House of Vo!la, explains: “In recent years abuse against Indian women has escalated to such an extent that India has become the fourth most dangerous country in the world for women, and worst amongst the G20 countries. It’s time Indians from all walks of life learn to respect and appreciate the beauty in women and through my Desi Wooman I bring this message.”