Having sponsored the Tajikistan Expedition 2013, which achieved its objective of summiting a previously unclimbed peak earlier this year, Christopher Ward had the privilege of naming the new peak. Welcome to Mount Christopher Ward!

In what is believed to be the world’s first naming of a mountain after a brand, Christopher Ward took up the position of lead sponsor of the Tajikistan Silk Road Expedition 2013, which set of from Scotland in late June. After a 3,500-mile road journey to central Tajikistan followed by a 3-day trek into the mountains the expedition achieved the new peak on August 6th, reaching 4922 metres.

The young team’s venture, led by 20-year old Struan Chisholm, was only the second climbing expedition ever seen in the remote Rog Valley, where a number of unclimbed peaks still remain. Across the whole adventure, conditions ranged from sea level to almost 5000 metres and temperatures ranged from 45C to -15C, creating a test of endurance for the team and for their Christopher Ward C11 chronometers.

After spending a few days acclimatising and then selecting routes through the mountain range, the highest available peak was targeted and news of their success came via a brief satellite phone message from Struan: “Lat: N 39 21’ 0’’ Long: E 70 0’ 18’’. 2am start. Shooting stars darting across the sky. Glacier creaking. A gruelling ascent culminating in a vertical ice climb. Today we reached the peak of the icy white giant which dominates our valley - at 4922 metres (16148 ft) - Mount Christopher Ward.” 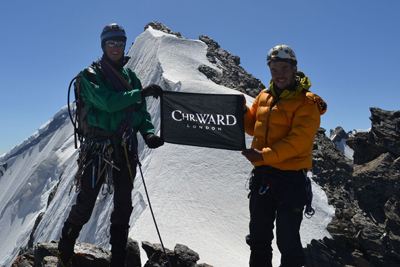 Chris Ward, eponymous co-owner of the company, shares the pride in the achievement: “The Tajik 2013 expedition are a highly skilled team and, on top of their achievement as mountaineers, their determination has quite literally put the Christopher Ward name on the map in a remarkable way. This is an absolutely amazing ‘first’ for any brand – we’re sure that no other company has ever achieved this before - and reflects our brand passion for originality, skill and adventure. I’m also looking forward to hearing how our watches performed on their incredible journey!”