In the past ten years, turnover in the German jewellery and timepiece trade has increased by a total of 60 per cent to almost €6 billion in the year 2012. As the most important German trade show in the area of jewellery and timepieces and one of the leading shows worldwide, Inhorgenta Munich is the driving force behind this development – 1,237 exhibitors and around 30,000 trade visitors took part in the 2013 event. For the next edition on February 14 - 17, 2014, demand is looking similarly strong.

The current figures from Germany’s Federal Statistical Office say that the turnover from trading in jewellery and timepieces in Germany in the past ten years rose from €3.66 billion in 2002 to €5.96 billion last year.

“The German jewellery and timepiece sector has developed strongly in recent years. From the figures, the upswing can be expected to continue,” says Klaus Dittrich, Chairman & CEO of Messe München. “The success of Inhorgenta Munich not only confirms that a large part of the year’s business is transacted at this show – the trends for the year are set here as well.” At the 40th Inhorgenta Munich, around one third of the trade visitors came from abroad. “International visitors are of crucial importance to the German market,” explains Dittrich. 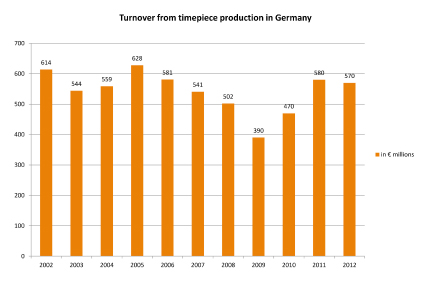 Germany as production location: jewellery and timepieces In the area of production, Germany can look back on some exciting development in the past ten years. At the same time, the economic crisis did not spare the timepiece and jewellery sector either. While turnover from jewellery production in the year 2002 was still at €949 million, this shrank continually in the following years and reached a value of only €650 million in 2009. Since 2010, the downswing seems to have been reversed, as the figures confirm: in 2011, the jewellery sector recovered to generate turnover of €849 million. In the year 2012, it was €803 million.

In the production of timepieces, the low point of the past ten years was also reached in 2009. While a turnover of €614 million was still attained in 2002, the overall turnover seven years later was merely €390 million. Here too, an upswing became apparent in the year 2010. Since 2011, turnover has again been over €500 million. In the following year, timepiece production grew to €570 million in turnover, generated by 90 businesses with around 3,300 employees, compared with 345 businesses with 5,850 employees in the jewellery sector.

As confirmed by the Bundesverband für Schmuck und Uhren – the Federation of German Jewellery, Watches, Clocks, Silverware and Related Industries – some two-thirds of the entire German production of jewellery is concentrated in the area of Pforzheim and Enzkreis. Every year, numerous companies from Pforzheim introduce their innovations at Inhorgenta Munich to the domestic and international trade audience.