A vision of style and technicality, the Challenge Dani Pedrosa was developed to technical criteria from the world of motor sports. 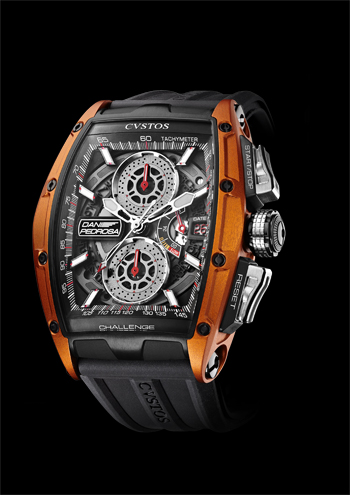 Case: light and powerfulAs Dani’s lucky number is 26, the Challenger is produced in two limited series of 26 models each, in ‘Honda Repsol’ orange aluminium, or a smart dove grey all-titanium version. Extremely light yet robust, titanium is an ideal material for flawless engineering.

Design elements from the racing worldTwo vents appear on the left-hand side of the case, adding dynamism to the design and recalling the air intakes on a motorbike. Other biking elements appear on the watch as a tribute to Dani’s prowess and the thrilling world of motor racing: the crown shows an elegant interpretation of a motorbike flywheel, and two sturdy grip-style push buttons echo the bike throttle and brake handlebars.

Dial: design and precisionThe barrel-shaped watchcase, with the number 26 engraved on the side, encloses a dial with sub-dials in the form of brake discs, and a power reserve in the style of a fuel gauge. The Dani Pedrosa logo is etched onto a plate at 9 o’clock. An extra flourish is seen in the number 26 highlighted in red, displayed on the 26th of each month, within the date counter. 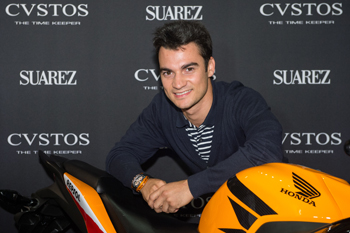 Automatic movement ideal for motor sportsThe new Challenge Dani Pedrosa timepiece teams style with sophistication, demonstrating Cvstos’s watchmaking flair. In addition to the automatic chronograph movement, which is assembled and decorated in Cvstos’s Geneva-based atelier, the timepiece features a jewelled oscillating weight, which is a full sphere, designed in the style of a spoked wheel rim. This rotor employs Cvstos’s own tungsten88- titanium technology and is laser-etched with the serial number of each model. This new timepiece is born from a natural friendship and mutual respect between Cvstos’s founders and the racing star. This latest offering from the Swiss watchmaker marries the excitement and skill of sport with horological precision and craftsmanship. Dani provided Cvstos a great start to the new collaboration by winning the Spanish Moto GP just days after sealing their alliance.