Everything about The Birdman defies conformity – and gravity! Known for his energetic, exhilarating and record-breaking performances on court, Andersen has earned his ‘Birdman’ nickname thanks to his extreme airborne acrobatics and incredible 7ft arm span.

Then there are the tattoos – striking examples of the skin illustrator’s art, they dominate his body and tell the story of a life of adversity and triumph. He got his first ink as an 18th birthday present from his mother, and since then he has dedicated 75% of his skin to bold, colourful designs which make an uncompromising statement about the man and his philosophy. He’s also a passionate advocate of children’s charities – he has donated profits from the use of his image to an orphanage, a homeless shelter and a scholarship programme, and he is about to launch his own Freebird Foundation for underprivileged youngsters. 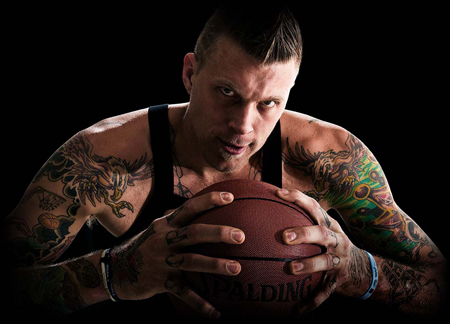 A man of contrasts who lives his adrenaline-fuelled life to the full – an ideal spokesman for Bomberg.

Bomberg says: “Chris Andersen embodies strength, dedication and commitment to excellence, which is why he’s a terrific ambassador for Bomberg and everything we represent. He’s relentless when he’s on the basketball court and fearless when he’s not – that’s something we can relate to!”

Chris Andersen says: “Bomberg is pure energy and I am thrilled to be part of a team that reaches from urban to top shelf enthusiasts. I am very selective about engaging in meaningful and over the top projects that project individuals’ statements, individuality in freedom of expression, and deep seeded beliefs in family, community, and friends! Bomberg delivers those principles and I am thrilled to be part of their family. I look forward to all of you joining me and my Bomberg family on this newly embarked quest. BLOCK AND ROLL see you soon. It’s our time!”