The official Poinçon de Genève (“Geneva Hallmark”) website is launched today, the anniversary of the passing of the law of 1886. It features a history section that traces the evolution of the Poinçon from the time of the “Fabrique” (late 16th century). A technical section explains the approval criteria and, to ensure full transparency, details the different stages and working methods of the individual functional tests and the people who carry them out. In addition, there is an international database that covers all watches that have received the Poinçon since September 2013. A major effort is currently underway to create an archive of all watches approved since 1886 - more than a million timepieces...

More than 125 years after its promulgation by the Grand Council of the Republic and Canton of Geneva, the Poinçon de Genève remains the oldest watchmaking certificate in the world, issued by a neutral and independent organisation operating under State control. Since it was updated in 2011, it is also the only official certification that guarantees a watch’s quality of craftsmanship, chronometric precision and principal functions by checking each timepiece individually. 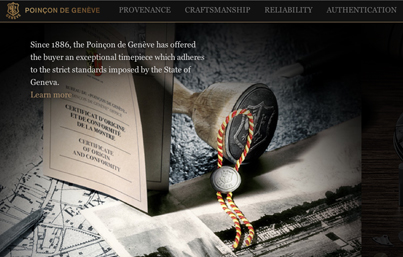 The Poinçon de Genève is currently the only watchmaking label to benefit from State guarantee. Today, this responsibility is fulfilled by TIMELAB, the Geneva Laboratory of Horology and Microengineering. The inspection criteria are drawn up by a Technical Commission made up of seven experts appointed for their knowledge and expertise in fine watchmaking. Their purpose, according to Jean-Marc Wiederrecht, founder and director of the company Agenhor and member of the Commission, “is not so much to define standards as to ensure the great tradition of Swiss watchmaking is preserved and respected. The Poinçon de Genève offers the assurance that a watch has been designed and manufactured according to the rules.”

Since 1886, every watch stamped with the Poinçon de Genève has been delivered with a certificate of origin. Since September 2013 it has also included a unique authentication key and QR code. These enable the purchaser to check the authenticity of the document and the watch’s certification before buying it by consulting a database available on the website. Produced using an innovative procedure that combines holographic and hot stamping techniques, the certificate is almost impossible to forge.

See the August - September 2012 issue of Europa Star for more information on the Poinçon de Genève.