Nixie Machine by Frank Buchwald for the M.A.D.Gallery [Video]

Nixie Machine by Frank Buchwald for the M.A.D.Gallery [Video]

Crafted out of burnished steel and brushed brass, and featuring six glowing Nixie tubes made half a century ago, Nixie Machine – created by German artist Frank Buchwald for M.A.D.Gallery and based on an idea by Alberto Schileo – is a clock like no other. Each one of Nixie Machine’s glowing six digits is displayed via an original, incredibly preserved Z568M Nixie tube manufactured by RFT in East Germany during the 1960s. 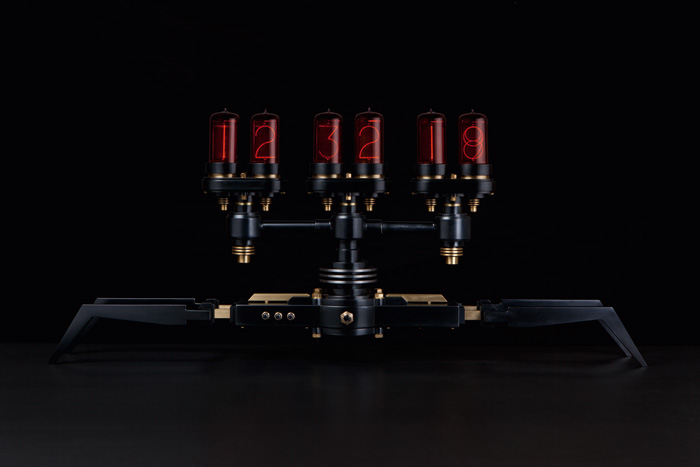 The Nixie Machine by Frank Buchwald

The six tubes are presented as three pairs – for hours, minutes and seconds, or day, month and year – atop an eye-catching structure built in Buchwald’s signature “heavy engineering” style, as he puts it, that he established in his Machine Lights series. The stunning retro-futuristic design, bearing four legs and body-like symmetry, could have stepped straight out of a sci-fi movie.

Sourced by Schileo, the Nixie tubes used in Nixie Machine are among the largest – 90mm in height – and rarest ever made, and are combined with electronic circuitry to create a glowing six-digit display. The radiant discharge of the Nixies coupled with the assertively engineered structure makes Nixie Machine, in the words of Buchwald, a veritable “altar of time”. 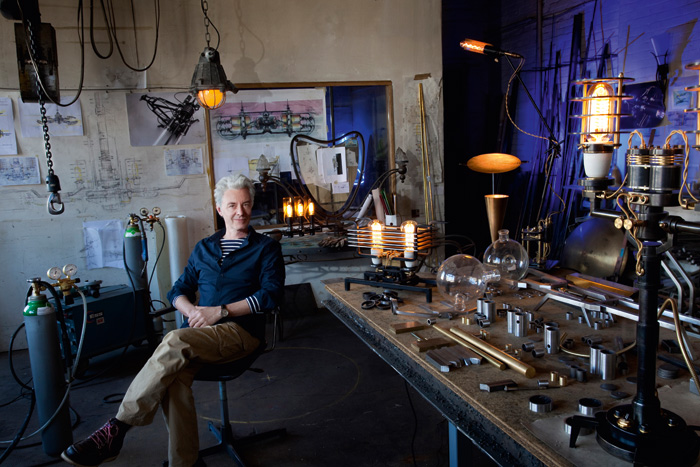 Frank Buchwald in his workshop

The Clock Nixie Machine’s clock is powered by a direct drive mechanism. This is where each digit of each tube is controlled individually, and power is applied to the cathode all the time while it is lit. This sophisticated circuit is demanding to build, but is easier on the tubes over time and helps maximise their lifespan. 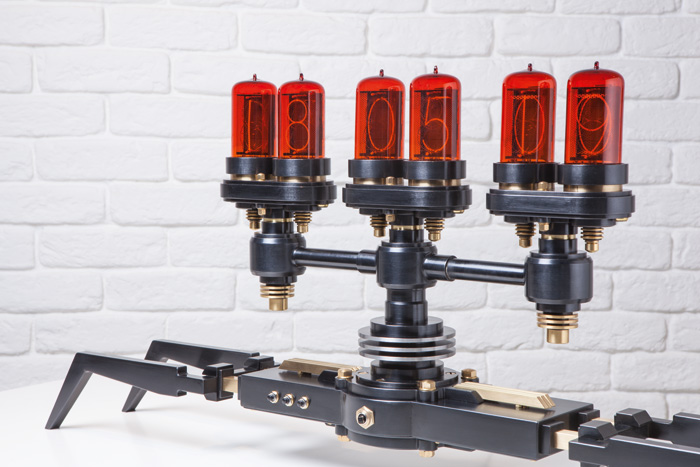 The Nixie Machine at the M.A.D. Gallery

Nixie Machine’s clock circuit board has both a GPS receiver and DCF77 receiver for time and date setting. Manual setting is also possible. There are a variety of date and time formats, and different ways of displaying those, including fading effects. One key feature is a programmable flip over effect where the digits count fast from one digit to the next, like the reels of a slot machine. Being able to regularly cycle through all the digits of all the tubes helps to prevent ‘cathode poisoning’ – when regularly unused digits accumulate a deposit and eventually cease functioning – thus maximising the life of each tube.