Richemont has announced its audited results for the fiscal year ending March 2015. Of note, the group has posted increased sales, but at the same time decreased profits.

According to Richemont’s latest financial report, the company assesses that its results were “resilient” despite operating in a “volatile economic environment” over the last year. Nevertheless, it’s clear that a changing economic climate has affected both its customers and retail distribution partners.

As well established by now, the report confirms a key contributor to this volatility was the decision made by the Swiss National Bank to end the peg of the Swiss franc to the euro in in January 2015. In the short term, the revaluation resulted in a loss of € 686 million for the Group, principally attributable to losses on cash and financial investments. This was particularly problematic because Richemont holds the bulk of its cash assets in euros, and these assets are held in Swiss franc-denominated companies. Overall, currency exchange losses resulted in a significant drop in net profits for the year.

On the one hand, the group showed some positive results. Overall, sales increased by 4%. Its gross margin on sales also remained relatively high, increasing slightly to 66.1 %. According to the report, the positive numbers are helped by growing sales in particular sectors of the Maisons’ own boutiques located in popular tourist destinations:

“The 4 % increase in sales at actual exchange rates and 1 % at constant exchange rates reflected growth in jewellery, haute horlogerie and steel watches, as well as growing demand in Europe, the Middle East and the Americas.”

In fact, Europe accounted for 30 % of overall sales. Growth in Europe was 6%, which might have been higher in a more stable climate and less volatile tourism flows. Sales in Asia Pacific accounted for 39 % of the total, which is the Group’s largest market. But that same market worryingly showed acute losses in the second half of the year. Luckily, those decreases were partly offset by growth in other markets, like Europe. 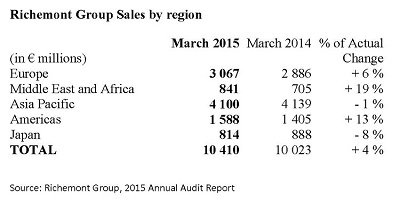 Despite slight increases in overall sales, profits for the group actually declined during the reporting period. A drop of 35 %, equaling a reduction of € 733 million compared to the previous year is indeed worrying. According to the report, the decline is (somewhat) explainable:

All regions in which the group operated reported sales growth, except for Asia Pacific, which continues to be affected by a difficult trading environment in Hong Kong and Macau. Growth has also been skewed to favour retail channels, which significantly outperformed wholesale channels.

Nevertheless, Richemont expects long-term demand for high-quality luxury products to continue to grow around the world. Chairman Johann Rupert concluded by reporting that they are “well positioned to benefit from an expanding market in the years to come” allowing the group to look positively towards the future.

But if sales increase, and at the same time profits decrease by a third – like it was the case last year – it appears that the group might have to restructure operations and refocus on increasing its margins even further to compensate. (VJ)