Inhorgenta Munich has entered into a partnership with the China Watch & Clock Fair, one of the biggest trade shows for the industry.

Good business is all about good relationships. And in times of increasing competition, it’s good to be in good company. So it’s no surprise that a new strategic partnership was announced in the watch industry.

On 24 June 2015, Stefanie Mändlein, Exhibition Director of Inhorgenta Munich, and Zhu Shun Hua, Chairman of the Shenzhen Watch & Clock Association signed an important cooperation agreement. It will bring their respective fairs ever closer, with a look towards the future. 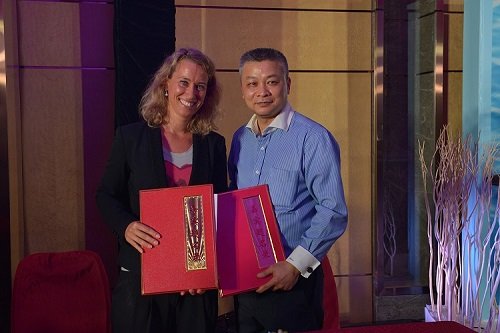 Exhibition Director Stefanie Mändlein explained the motivation behind the move:

“Not only does this cooperation agreement allow us to enlarge our global network by an extremely important industry partner, but also to accompany our exhibitors ideally when venturing into the Asian market in the future.”

The China Watch & Clock Fair (CWCF) is the largest trade show for watches on the Chinese mainland. It is also one of the most important ones worldwide.

But the CWCF will also stand to benefit from the cooperation with Inhorgenta Munich, as it has started to build up a jewelry and design segment within its product offer. As a result, Inhorgenta Munich is now also the official co-organizer of an international pavilion at the China Watch & Clock Fair 2016, which will take place from 23 to 26 June 2016 in Shenzhen.

The new partnership will be realized first and foremost at the next Inhorgenta Munich, set to take place from 12 to 15 February 2016. Expect to see a Chinese delegation of exhibitors and members of the Shenzhen Watch & Clock Association in Munich next year. (VJ)