Manufacture Royale recalibrates the anatomy of a watch

Manufacture Royale recalibrates the anatomy of a watch

The brand from the Swiss Jura has released the new 1770 Voltige, a timepiece which has its heart ticking above the dial.

With the exception of skeletonized watches, the mechanics of timekeeping are usually left to be admired through a crystal case back. The see-through case back is a great invention in its own right, but in order to be truly appreciated, the wristwatch has to be off the wrist. And even then, all the components are in their usual place, they are just slimmed down or hidden.

Manufacture Royale has now released the 1770 Voltige, which challenges the anatomy of watchmaking altogether. While the watch has the typical see through case back which displays the MR05 calibre’s inner workings, with this timepiece all the mechanical action is up front and on centre stage. The wearer can now see how stored energy is transformed into increments of time on right on the dial itself. That is because the escapement and balance wheel are positioned above the dial. 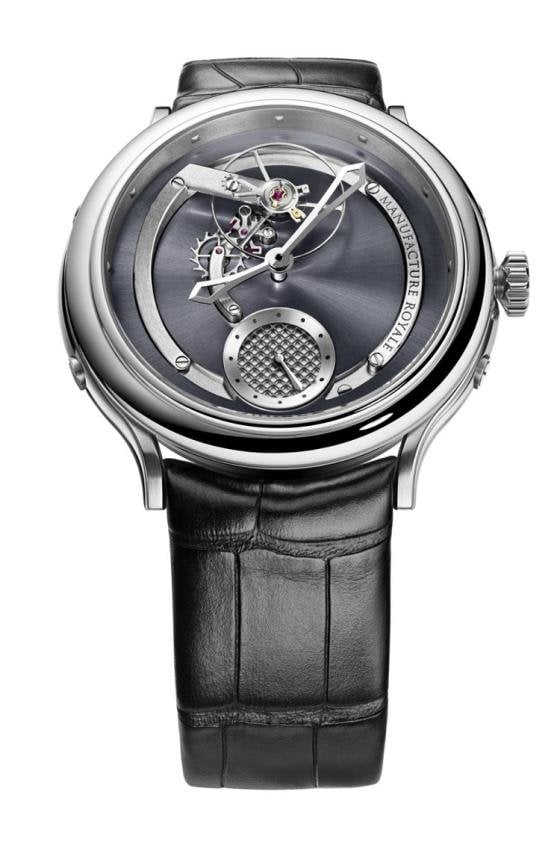 According to the brand, the Voltige’s “heart beats above the dial”. And for all intents and purposes, they are right. After all, the escapement is responsible for the iconic ticking sound that a mechanical watch produces. The job of the escapement is to gradually release the energy stored in the mainspring of a watch. That stored energy is then transferred to the balance, tick by tick.

Indeed the escapement is the closest thing that a mechanical watch has to a heart. It not only ticks like our hearts, giving us the feeling that a watch is a living being. It also regulates the release of energy, which then makes time move forward, one tick at a time.

So why is all this important? In short, by taking the escapement out of the movement, what the designers of Manufacture Royale have accomplished with the Voltige is the equivalent of performing open heart surgery on a watch. The only difference here is that the watchmakers removed the heart but they didn’t replace it back in the chest. They left it out in the open, and yet, it keeps on ticking. 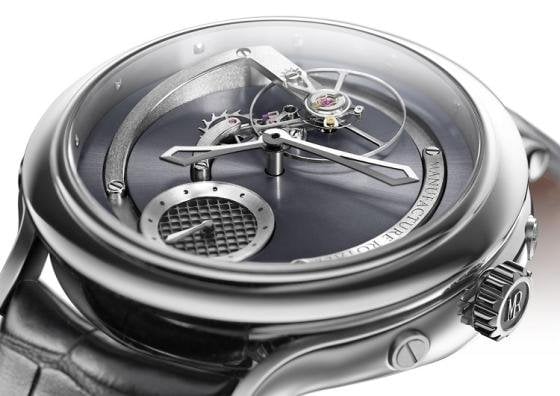 In doing so, the brand has succeeded in giving importance to a small component of a watch that some of us might not even recognize. But in my opinion what really shines on this watch more than the exposed escapement is the balance wheel. It is secured by a semi-circular bridge which gradually rises to its high point above the escapement on the dial. Below it, the pallet and the escapement wheel meet, producing a high beat rate of 21,000 vibrations per hour.

The balance appears to simply hover over the dial. This visual visual effect is accomplished by the designers purposefully leaving vast amounts of space around the escapement. And the 45mm stainless steel dial further adds to that vastness. The hands, too, also look like they are floating, an effect which is helped by a domed sapphire glass.

Now, heart surgery is no small matter. And it is usually accompanied by a hefty price tag as well. This operation, conducted by the designers and watchmakers of Manufacture Royale in the Swiss Jura, costs no less than 27,000 Swiss francs. (VJ)