The robust skeleton: the Twenty-8-Eight Skeleton Tourbillon by DeWitt


The robust skeleton: the Twenty-8-Eight Skeleton Tourbillon by DeWitt

Tourbillons are the name of the game once again and the new offering by DeWitt manufacture is a skeletonized model. But this watch is more than just skin and bones.

The idea behind skeletons model is simple: take as much material as possible out of the construction of a timepiece, making it lighter and ultra-skinny. While that is an accomplishment in itself, the problem is that the resulting timepieces are usually quite fragile.

But that’s not the case here. After all, we are dealing with a brand that has been strongly influenced by architectural design. 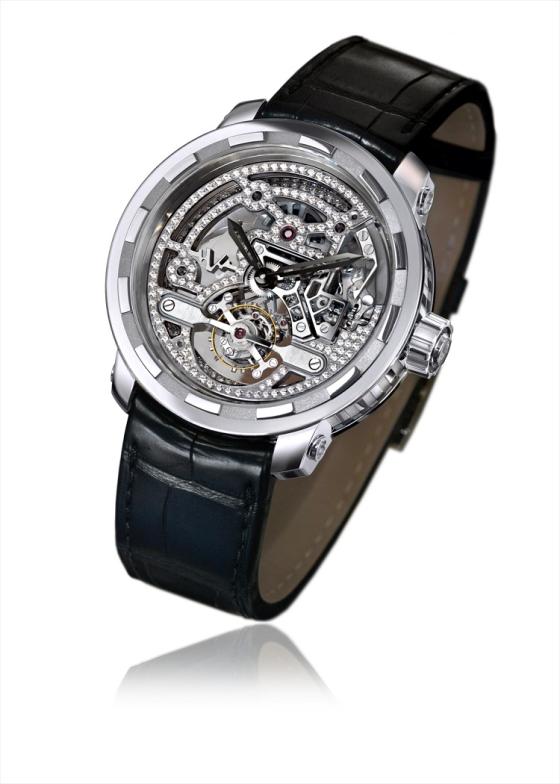 The new Twenty-8-Eight Skeleton Tourbillon by DeWitt doesn’t pretend to compete with the ultra-skinny and fragile skeletons already on the market. The architecture of this skeleton model remains deliberately strong, as shown by its 48 imperial columns, which is a typical feature of practically all DeWitt masterpieces. They add depth to the timepiece, and the brand has really played with layers on this watch, featuring an impressive labyrinth of curves, circles and straight lines.

The skeletonized barrel positioned at 12 o’clock, for example, reveals the interior of the motor. The shape given to the open-worked barrel was inspired by the design of vintage car steering wheels. As the barrel wheel turns with the unwinding of the spring, the stems of the upper part will glide over the stems of the lower part. 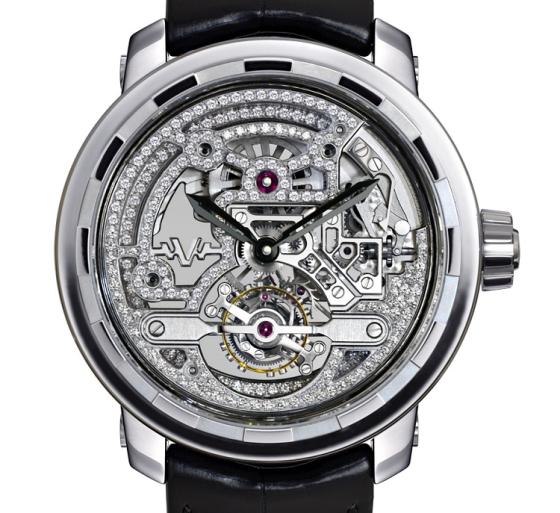 There is also a skeletonized “W” logo positioned at 9 o’clock, which is duplicated on the lower part of the movement. Again the effect is interesting, giving the feel of added volume when looking at the movement from either side of the watch. And of course, there is the tourbillon, which draws eyes even deeper into the movement.

The watch’s manually wound DeWitt calibre DW8028s is entirely produced in-house. Impressively, it is equipped with a Swiss anchor escapement and a spiral made out of an unbreakable, self-compensating, non-oxidizing, anti-magnetic alloy. The precise flat rolling of the Hairspring – which measures at a miniscule 0.0001 mm - guarantees the mechanism’s extremely high precision. 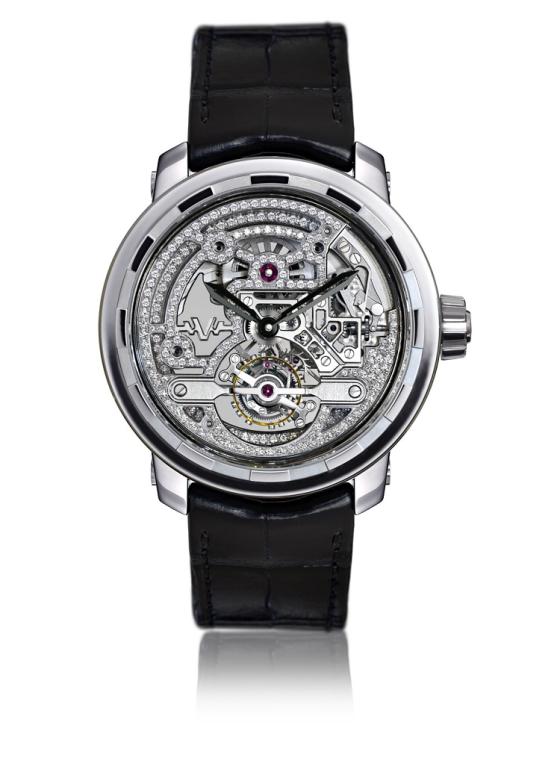 The movement is housed in a well-proportioned 43 mm case made in 18-carat white gold, featuring redesigned lugs and columns displayed on its flanks, making it instantly recognizable as a DeWitt piece.

And for DeWitt it’s not enough that the watch is hand-made; the manufacture also ensures that each high complication watch is entirely assembled, adjusted and tested by a single master watchmaker. It is a combination of that kind of finesse and architectural strength that makes this watch one of the most robust skeleton models on the market.