With the Euro 2016 football championships happening right now in France, many of us will be distracted by sport. But not Gilbert Gudjonsson, the master watchmaker at JS Watch Co. According to the Icelandic watch brand, Gilbert has a “legendary concentration”, and paired with his 45 years of experience, he personally ensures that every watch coming out of their workshop has been perfected. 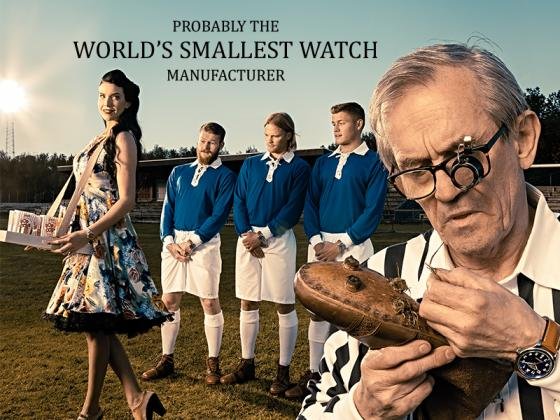 Now, they have focused their legendary concentration on football and the pride of Iceland.

The EURO MMXVI Limited Edition was created to celebrate the Iceland men’s national football team qualification for the UEFA championship. With a population of around 330,000, Iceland is by far the smallest nation ever to qualify for the championship. The country was the talk of the footballing word, one of the biggest surprises in recent times. 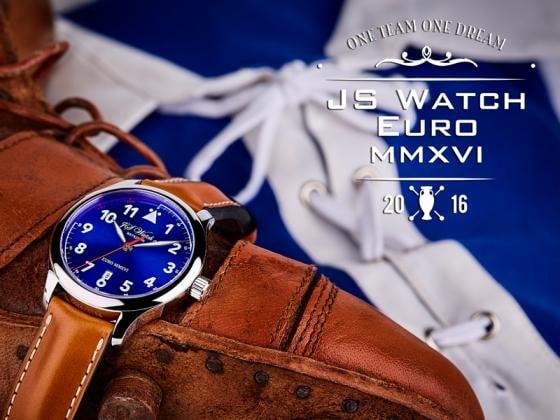 As a result, “probably” the smallest watch manufacturer in the world has decided to commemorate the accomplishment with a unique timepiece.

The special edition EURO MMXVI watch comes in a 42 mm steel case and sports a curved anti-reflective sapphire crystal and see-through sapphire crystal back. But what really steals the show is the blue sunburst dial, which is aviator theme inspired and meant to represent the flight of Iceland’s national football team. 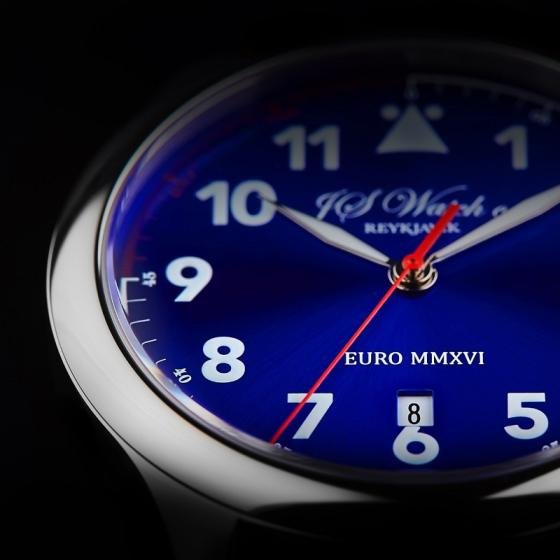 The football motif is represented throughout the dial, from the radiant blue colour of the team’s shirts to the white luminous numerals that use same font as the numbers on the back of the players. Around the dial we have 45 minutes of the game time half indicated with white, and the 15 minutes for half time in red.

On the inside we have a Swiss Made automatic movement, which is “execution top”, meaning it has been specially finished and elaborated to last longer and look nicer than any standard issue movement. Its custom decorations, including blue screws and a rhodium plated finish, can be admired in detail through the case back. 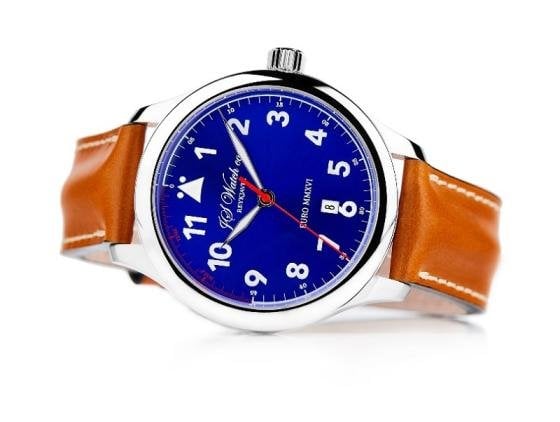 The EURO MMXVI is the latest of quality timepieces by JS Watch Company. The independent watchmaker is already known for its bold designs and down-to-earth spirit. If you pass by their shop in the heart of Reykjavik, for example, master watchmaker Gilbert Gudjonsson will take his time and have a chat about anything watch or Iceland-related. With a growing fan base, the small challenger brand from a small challenger footballing country is definitely making a name for itself on the world’s stage.