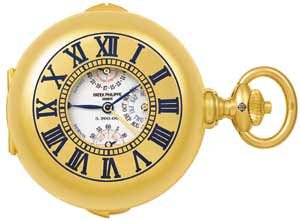 Patek Philippe Star Caliber 2000 celebrates the year 2000 and the dawn of the new millennium with a monumental timepiece.

The Star Caliber 2000 is a double-faced pocket watch. With 21 complications, it ranks third among the world's most complicated timepieces, right after the Patek Philippe Caliber 89 (1989 - 33 complications) and the Patek Philippe Graves (1933 - 24 complications). With its Grande Sonnerie that strikes in passing and minute-repeater for the strike on demand, it is the first timepiece that can play the correct sequence of the Westminster Chime.
The Solar dial indicates the time in hours, minutes, and seconds, the running equation of time, the displays of the perpetual calendar, the sunrise and sunset times, and the power reserve of the movement and chime. The celestial side of the watch shows the movements of the nocturnal sky, the lunar orbit, and the phases of the moon.
Six patent-worthy mechanisms substantiate the high degree of innovation incorporated in the Star Caliber 2000.
Altogether, twenty Star Caliber 2000 watches will be produced - in five sets of four timepieces each. Four sets consist of a yellow gold, a white gold, a rose gold, and a platinum watch. The fifth set is composed of four platinum watches. A complete set in yellow, white, and rose gold, and platinum is priced at 13.2 million Swiss francs (approx. US$ 7.5 million).