It’s no easy task, freeing watches from the two hands that show the hour and the minutes! No easy task, because it is through the movement of these two hands that the eye is able to perceive what time it is in an immediate, graphic manner, without this information having to be converted into figures by the brain.

It’s no easy task, freeing watches from the two hands that show the hour and the minutes! No easy task, because it is through the movement of these two hands that the eye is able to perceive what time it is in an immediate, graphic manner, without this information having to be converted into figures by the brain.
T

he reason for this is simple: the hands are not there to tell us the exact time right now, but to show us – again, graphically and without calculation – the time remaining until our next deadline (appointment, departure, job to do, etc.). Watchmakers have long been seeking to surpass or bypass this banal way of showing the time.

Watchmakers have long been seeking to surpass or bypass this banal way of showing the time.

For a while, digital displays seemed to have provided a solution. But really, who cares whether it’s 10:51:32, 33, 34, 35 or 36, when the minute hand shows us at a glance that we have just under eight minutes left before 11am. And on a day-to-day basis, this “imprecision” is largely sufficient.

That said, the search for ways to eliminate the two hands offers watchmakers plenty of aesthetic and technical fields to explore. It enables them to offer watches with a whole new appearance and astonishing mechanical systems, maintaining the hope – or the illusion – that the supremacy of the two-handed watch might one day end.

ULYSSE NARDIN FREAK VISION
We owe the concept of the Freak to the congenial Ludwig Oechslin, who developed it for Ulysse Nardin back in 2001. Its basic principle is a carousel-tourbillon mounted on a baguette movement which transforms its rotation into a mechanism that displays the time. Since then, it has never ceased to evolve. Here, it comes in a fully modernised case with an upper bridge in the shape of a ship’s hull. For the first time, it is also equipped with the new and highly efficient Grinder Automatic Winding System and the Ulysse Nardin Anchor constant force escapement, made entirely in silicon and featuring a circular frame with a pallet fork at its centre that pivots without friction. From 50,000 to 100,000$

URWERK UR-111C
In the Urwerk tradition, none of the indications of this brandnew UR-111C watch are conventional: the minutes are shown in two different ways – digitally for precision, and linearly for the pleasure of the eyes (this new creation is a descendant of the UR-CC1 King Cobra watch inspired by a Louis Cottier prototype). Jumping digital hours. Squeletonised seconds visible thanks to optical fibre transmission. In addition, the roller on the case performs the usual crown functions. Designed by a Sci-Fi addict. From 100,000 to 200,000$

HAUTLENCE HL VAGABONDE
“To create new approaches to reading time – such has been the vocation of Hautlence since 2004” states the brand. It is with this purpose in mind that the Vagabonde, too, sets out to explore satellite time display. Set on different levels, four discs divide up the centre of the dial. The largest, in sapphire, displays the minutes across a 2400 sector. Orbiting around this central point, they are once correctly aligned, three smaller, openworked discs reveal the hour numerals, the typography of which is reminiscent of a digital display. From 20,000 to 50,000$

URWERK UR-210 BLACK PLATINE
Released in 2012, the UR-210 is one of Urwerk’s greatest successes, one of the culminating achievements of its research into satellite complications. The oversized, 3D retrograde minute hand encloses the cube displaying the hours as it glides smoothly over the 60-minute scale through an arc of 120°. At the end of its route, the imposing retrograde hand covers the distance separating the 60-minute marker from the 0-minute marker in one-tenth of a second, with a loud “click”. Another wholly novel characteristic is its ability to measure winding efficiency during the previous two hours, and the possibility given to wearers to adjust the winding mechanism themselves. From 100,000 to 200,000$

PITA BARCELONA MOLINOS ORBITAL
Minimal and orbital. Three outsized gear wheels tell the time: the largest shows the minutes and the smallest, at the centre, the hours. Both of them, turning around the central axis, interact with a third wheel, the upper and lower teeth of which have been calculated so as to turn the minute wheel once an hour and the hour wheel twice every 24 hours. No crown disturbs the pared-down aesthetics of this watch, the setting mechanism of which is on the case back. A fine achievement. From 5,000 to 10,000$ 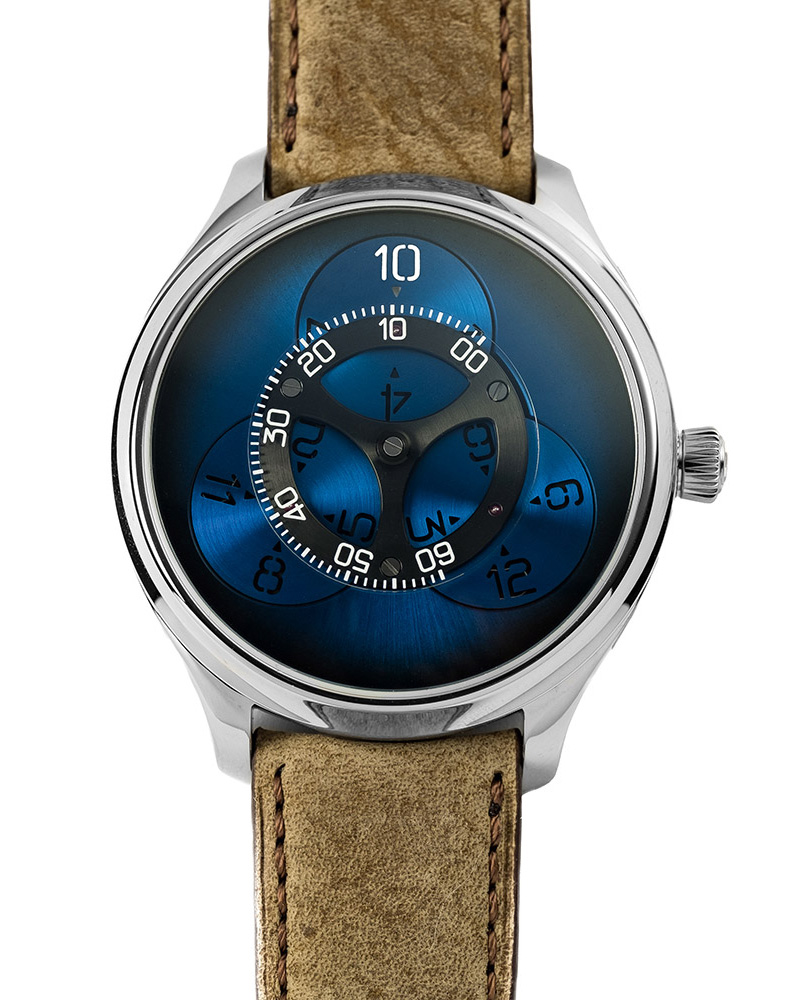 H. MOSER & CIE ENDEAVOUR FLYING HOURS
For the first time, H. Moser & Cie makes it possible to use discs to read the time. Together, three discs display the hour and a central sapphire disc displays the minutes. Provided by a module based on the self-winding HMC 200 calibre and inspired by satellite systems, this display manages to preserve and even enhance the very refined aesthetics and readability that distinguish the range offered by H. Moser & Cie. From 20,000 to 50,000$

TRILOBE
Devoid of hands yet ultra-classical in style, the Trilobe displays the time with the aid of three revolving rings: the hours on the outside, the minutes on the middle disc and the seconds at the centre. The latter, entirely openworked disc brings the dial to life, showing glimpses of the mechanism’s components. It reproduces the design of one of the most famous stained-glass windows of the Sainte-Chapelle in Paris in the form of a double trefoil, called a “trilobe”. More trilobes can be spotted in the shape of the three fixed markers pointing to the hour, minute and second. From 5,000 to 10,000$ 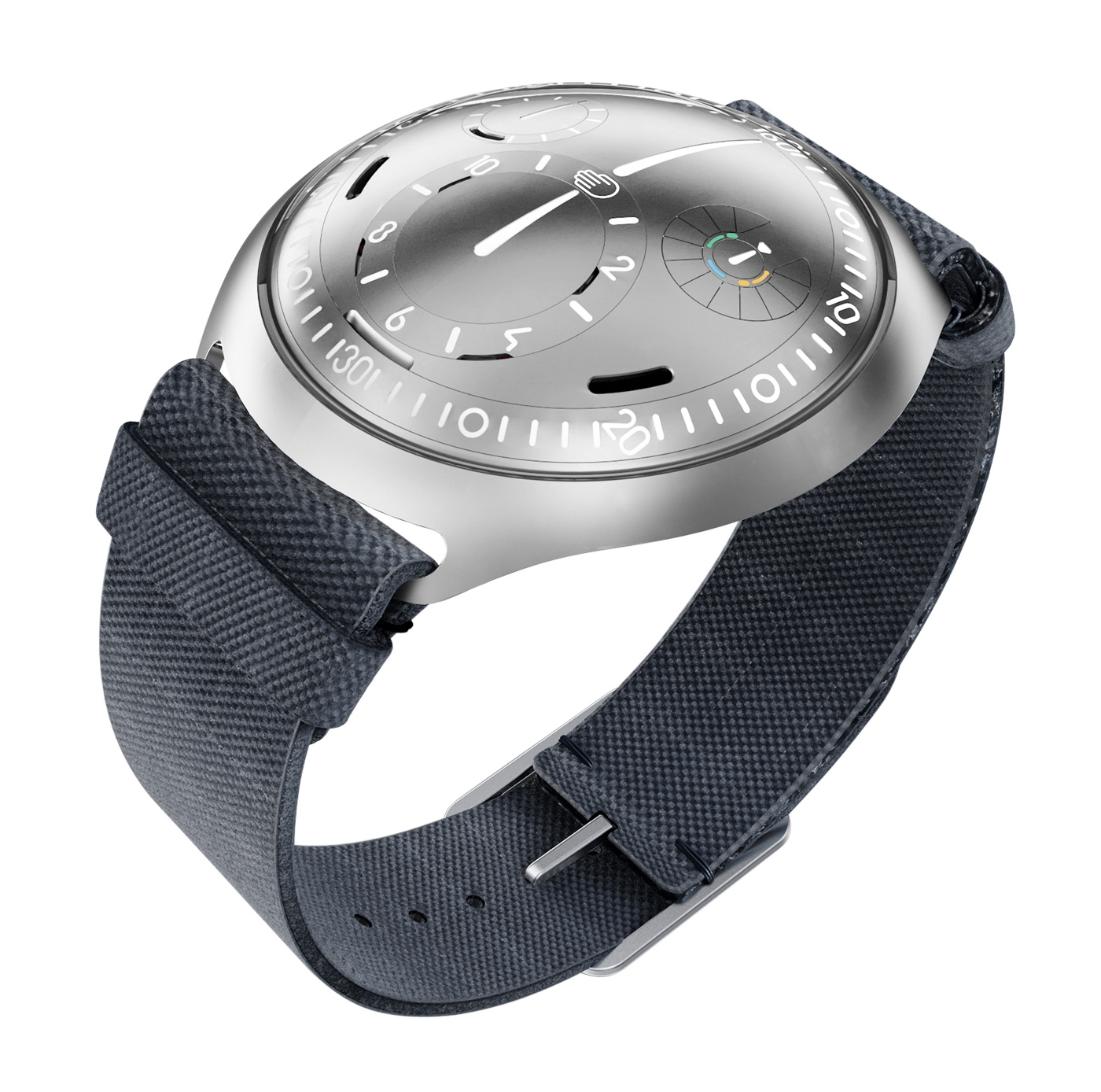 RESSENCE TYPE 2 E-CROWN
When designing his first watch, industrial designer Benoît Mintiens asked himself: “If mechanical watches were an invention of the 21st century, what would they look like?” His answer: a mono-surface dial composed of discs adjusted to the micron. Exit the physical hands. These are replaced by simple northsouth graphical lines reproducing the angles at which we are used to reading the time. The main and auxiliary dials are in constant rotation, like moons around a planet. Numerous technical innovations upderpin this achievement. The very latest, the e-Crown, has an in-house embedded electro-mechanical system capable of recording, controlling, adjusting and above all setting the time of the Type 2 e-Crown® Concept without any human intervention. From 20,000 to 50,000$

PIERRE JUNOD BY MARIO BOTTA
One single hand, for the minutes – we generally know what hour it is – and a sapphire disc marked with a double line for the hours. Reading it, while very different from what we are used to, is totally intuitive. This is the display solution opted for by the famous architect Mario Botta, who regularly collaborates with Pierre Junod, a watchmaker specialised in design watches at affordable prices. ETA quartz movement. Less than 1,000$

QLOCKTWO W39
110 letters, sorted in a mysterious matrix, indicate all times of the day. Only with light. Only with the push of a button. Only on request. The words on the clock face change every five minutes. In each corner, illuminated points represent the minutes in between - in over 20 languages. "The time is not forcing itself on the user, the time only appears when we ask for it," explains Andreas Funk, Founder and CEO of B & F Manufacture. Winner of the Red Dot Design Award 2018. From 1,000 to 3,000$ 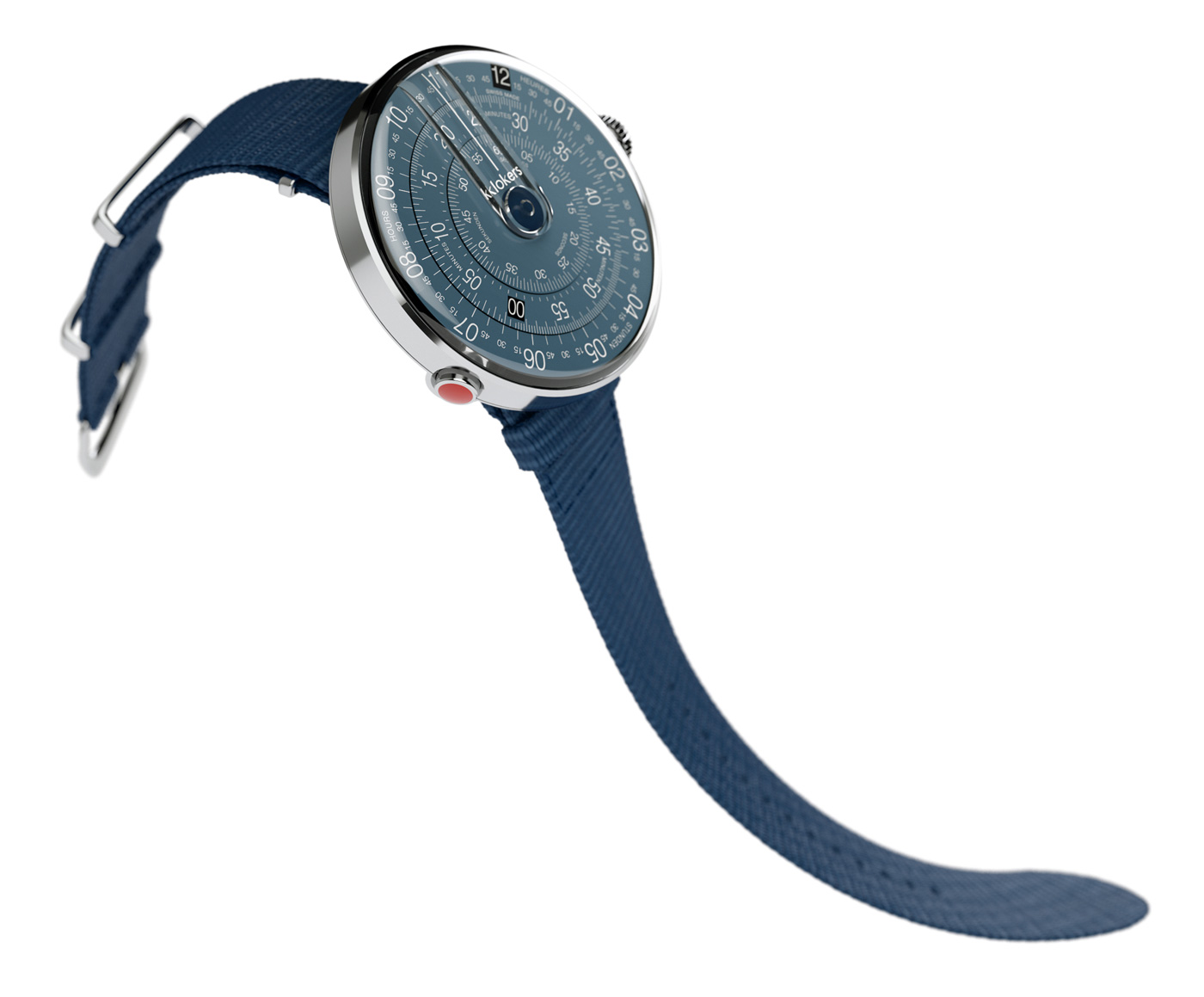 KLOKERS KLOK-08 MIDNIGHT BLUE
KLOK-08, the neo-retro design of which was inspired by the Sixties, turns all the usual rules of watch-reading upside-down. The dial has two concentric discs – one disc common to the hours and the minutes and another for the seconds – that turn in an anti-clockwise direction and display the time along a vertical axis at 12 o’clock. “Time is rhythm. Klokers puts the movement and rhythm back into the dial. We want to create visual curiosity and change the ways we’re used to reading time, to throw people off balance and force them to pose the question of how to tell what time it is. We have to ’unlearn’ in order to break these excluding moulds,” explains one of its two founders, Nicolas Boutherin. Less than 1,000$ 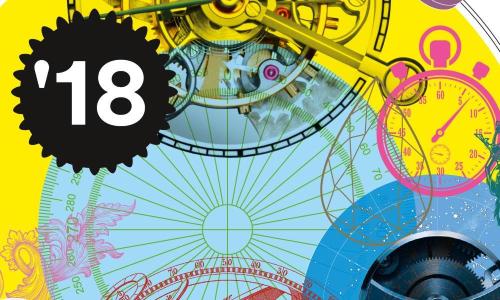 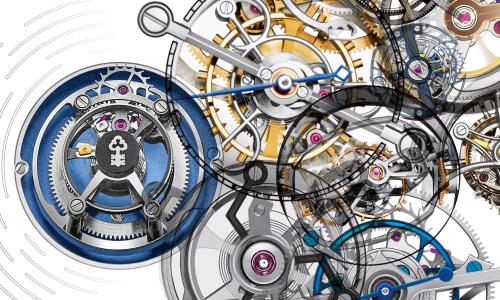 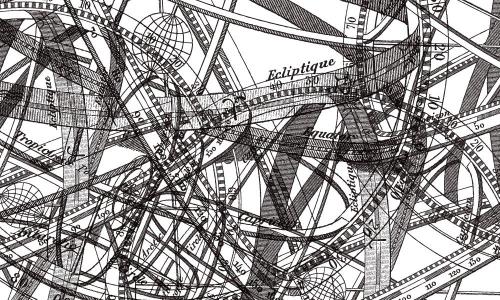 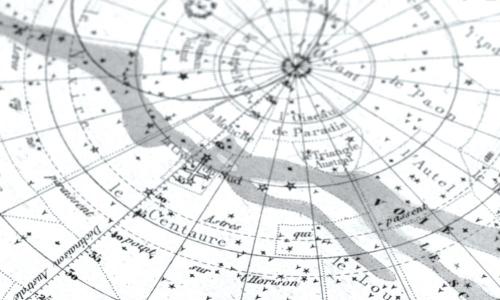 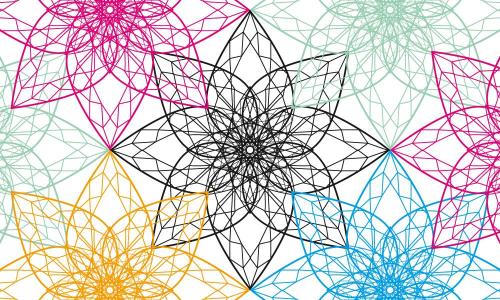 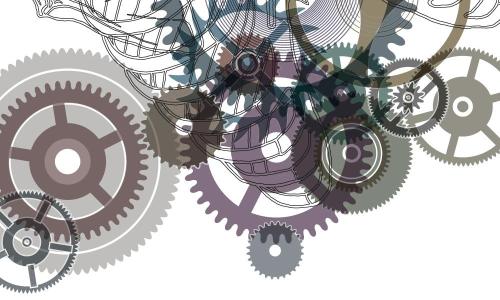 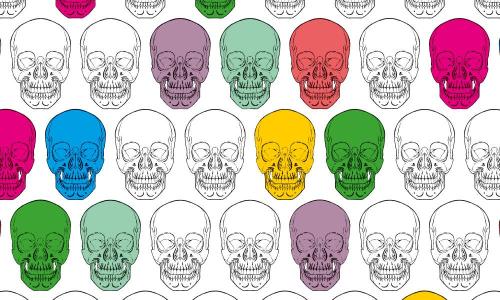 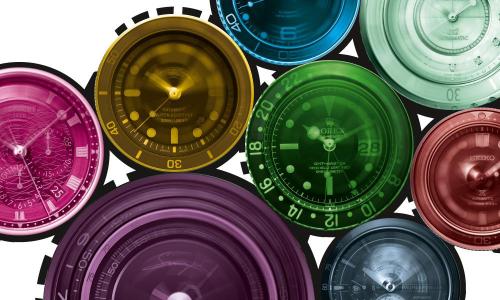 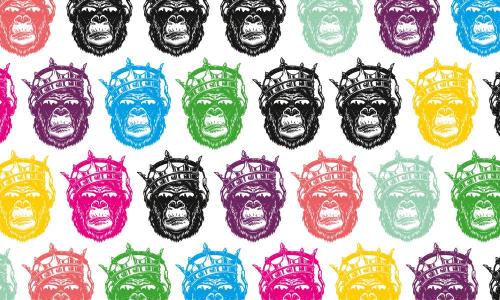 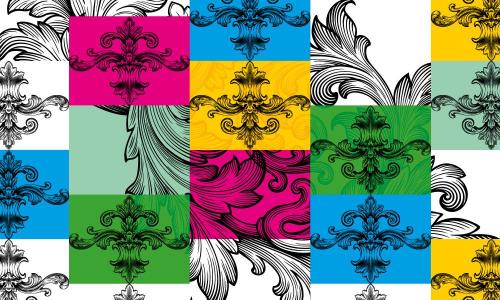 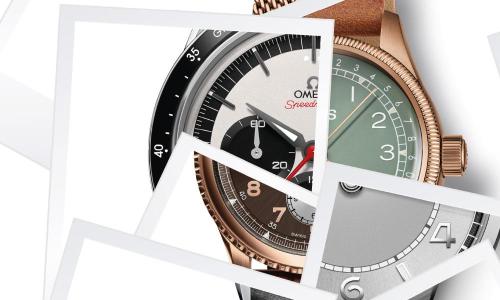 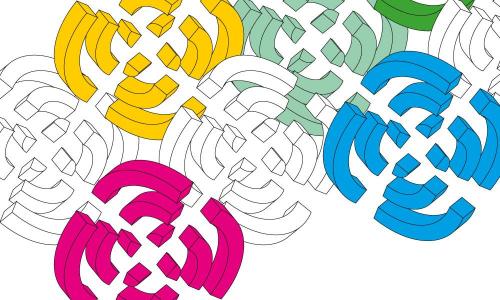 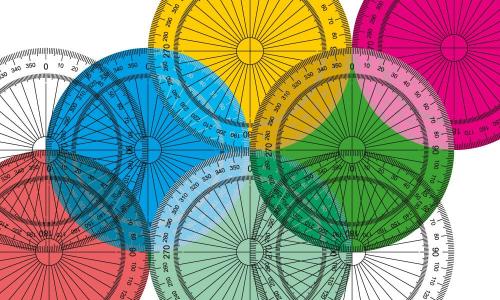