The multi-generational company based in California has conquered a place of choice in the highly specialised market of watch winders and watch cases. Its empire is now worldwide, positioned in the affordable luxury segment. Report.

The multi-generational company based in California has conquered a place of choice in the highly specialised market of watch winders and watch cases. Its empire is now worldwide, positioned in the affordable luxury segment. Report.
T

he workshops are well stocked with cardboard boxes, in this hangar in an industrial part of Los Angeles. And inside these boxes are other boxes... watch boxes. Watch cases and watch winders are the speciality of the Wolf company, run by the British family of the same name for five generations. The current heir, Simon Wolf, has decided to settle on the other side of the Atlantic, in California. It’s a practical choice, given that it’s half way between the assembly lines in China and the heart of luxury watchmaking in Switzerland. His playing field is now global.

“Producing a watch winder is more complicated than we usually think,” says Simon Wolf, showing us around the company’s headquarters in Los Angeles, which also serves as a logistics and after-sales centre for North America. “It is a matter of assembling hundreds of components to produce a product that is both beautiful and effective. We combine the work of leather with the mastery of electronics.” 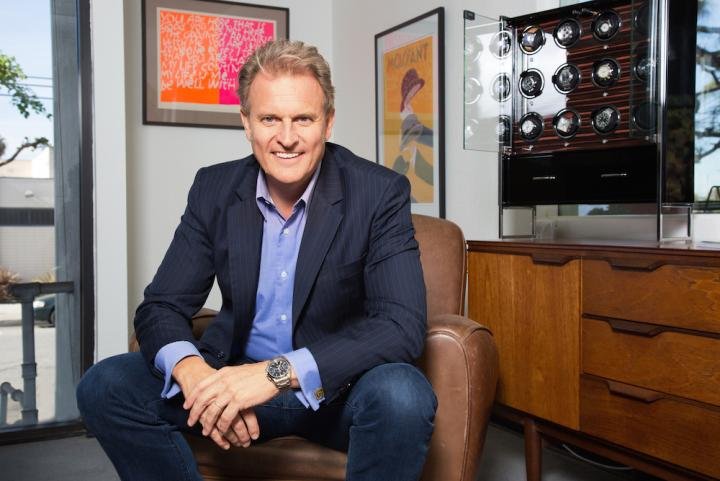 The “fitness” of the watch

But what exactly is the purpose of a watch winder? The device serves as a kind of “sports coach” for the watch, to keep it in shape when its owner isn’t wearing it. “If you leave your automatic watch on your bedside table, it will stop; it will no longer keep time, all the complications will be out of phase and it will not be good for its long-term functioning,” says Simon Wolf. “With our watch winders, you will find it in perfect working order. Otherwise, you should do like Nicolas Hayek Sr. and wear all your watches at all times, so they stay on time!” 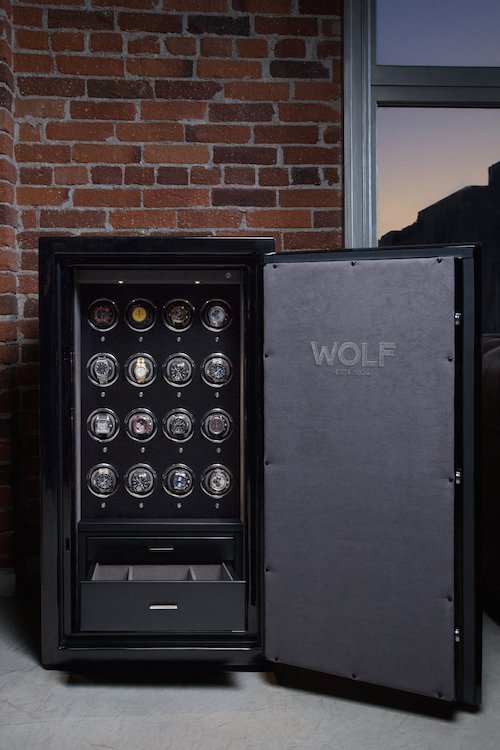 It is possible to set the rotation time, and the number and speed of the revolutions, on the electronic module(s) fitted to each rotating watch case. Like the human body, a watch should not be permanently “activated” – the result would be exhaustion! The module is therefore set to pause regularly. While it usually turns clockwise, some models with particular complications, notably by Patek Philippe, require counter-clockwise rotations for their continuing good health.

It’s an interesting sign of the times that the cuffs produced by Wolf to accommodate watches in their rotating cases have doubled in size in two decades, to adapt to ever more muscular watch formats. (Although a counter-revolution now seems to be under way!)

Wolf’s watch winders – designed in California, made in China, like Apple – start at 250 dollars and position the company in a mid- to high-end niche. Indeed, the brand also offers safes with multiple rotating modules, costing up to $250,000. The watch winder is undoubtedly the most “intriguing” part of Wolf’s activity. The company produces more than 200,000 modules per year (one module corresponds to one watch; a watch winder can accommodate up to 32 modules).

But the company founded in 1834 actually achieves nearly two-thirds of its turnover on another, more traditional activity, the production of boxes and kits for watches and jewellery, as well as other leather accessories. These are sold at specialised retailers, but also in large shopping centres. Wolf now has some 2,500 points of sale around the world, targeting both collectors who are looking for good performance in their watch winders, and people who appreciate the design of their leather goods. 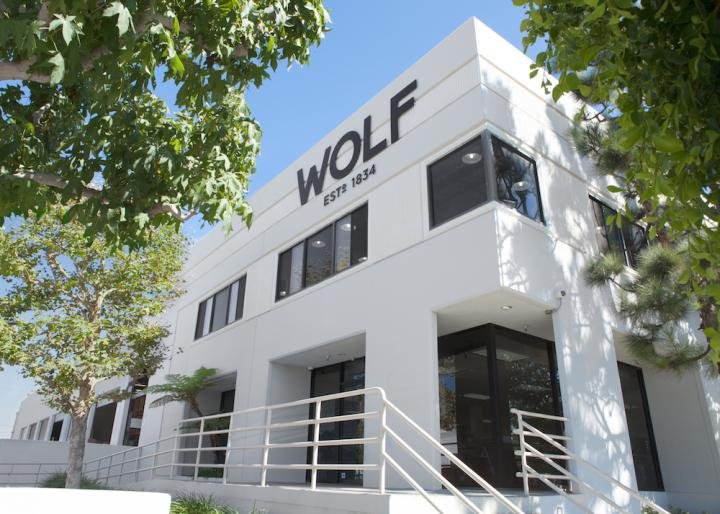 Wolf’s headquarters in Los Angeles, which also serves as a logistics center for North America

The United States, “probably the most mature market for the use of watch winders,” is Wolf’s main market, ahead of Europe. As for Asia, a new giant in watch consumption, it is still an “underdeveloped” and “high-potential” market for watch winders. Before Wolf can sell its products, it must first convince the target audience of their usefulness, and popularise their features. In a way, it’s a process of “evangelisation”. 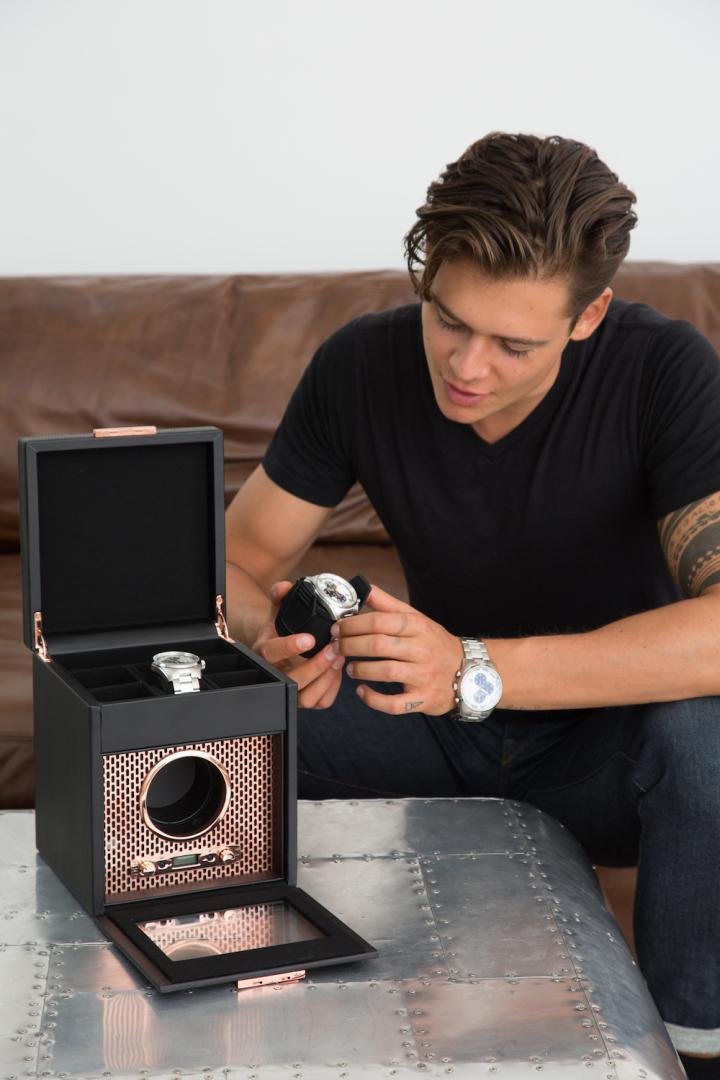 “Too often, retailers and customers still think, wrongly, that they do not have enough space to accommodate our products,” says Simon Wolf. “However, we can be very practical for watch shops. For example, a salesman can offer one of our watch winders to his customer, rather than grant a discount on the watch itself. It’s more elegant in a negotiation!”

The watch winder market has a small number of global players alongside Wolf: Scatola del Tempo in Italy, Buben & Zorweg in Germany and Swiss Kubik in Switzerland. It has also spawned an unknown number of cheap products with dubious pedigrees on platforms like Alibaba and Amazon. While it may facilitate counterfeiting, the web is also an opportunity for Wolf, which has launched its own e-commerce operation and has forged partnerships with specialised sales sites. The company says it already sells nearly a quarter of its production online.

In addition to its Californian headquarters, the company has offices in the UK and Hong Kong, close to the production site in Shenzhen (its partnership with a local manufacturer dates back some 30 years). Its watch winders rotate thanks to the silent electric motors provided by the Japanese specialised company Mabuchi Motor. The leather comes from all over the world, from India to South Korea. Wolf now even offers “vegan” leather, an interesting substitute for animal leather. 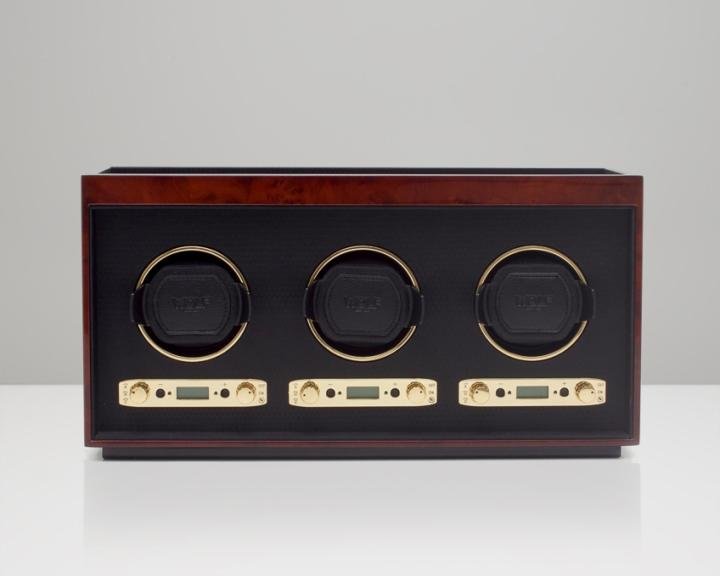 With his long experience in the field, Simon Wolf has announced an increasingly strong emphasis on product aesthetics. “When I took over my father’s company, the fashion side of our production was less important. Previously, the focus was primarily on functionality. Now we pay special attention to the design. We also have an integral photo studio at our headquarters, to shoot our products.”

Still, looking at the vintage advertisements for Wolf’s old leather goods, which decorate the walls of the company’s headquarters, it’s impossible not to feel a stab of regret for the beautiful aesthetics of yesteryear!