By Frank Müller, The Bridge to luxury, and Frank-Michael Müller / Responsio


2017 will be remembered as an unspectacular year for the German watch market. Yet, with hardly any growth, a business that just represents 2012 figures and persistent challenges, the country’s forecast looks unspectacular, too.

By Frank Müller, The Bridge to luxury, and Frank-Michael Müller / Responsio

2017 will be remembered as an unspectacular year for the German watch market. Yet, with hardly any growth, a business that just represents 2012 figures and persistent challenges, the country’s forecast looks unspectacular, too.
O

ne could feel the relief among the exhibiting brands at the recent Munichtime fair. This posh consumer watch show has become a precise barometer indicating the elapsed year’s commercial success. “Thank goodness, a stable business and no further downturn” was an oftenheard statement by industry representatives.

And indeed, the statistics of the Swiss Watch Federation support that assessment: exports of wristwatches to Germany amounted to 1 million pieces, worth some 799 million Swiss francs by end of October 2017. Though in terms of units a decrease of -8.9% is significant, a decline of -1.6% in value means the market got off lightly. Similar to other countries, the demand for Swiss watches at lower price ranges has diminished in Germany, while timekeepers at a per-piece export value of >500 Swiss francs have helped to compensate for the loss at the cheap end.

Taking the Swiss export numbers of former Novembers and Decembers as a yardstick, Germany is probably experiencing a moderate growth of +0.5% to +1.5% by the end of 2017 (995 million Swiss francs in value; estimate The Bridge To Luxury). In the long historical perspective, Germany remains a conservative market. Its global market share of Swiss exports was almost stable and represents approximately 5.2% in 2017 (source FH). 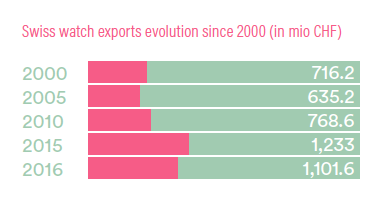 The modest market growth, though, will have basically been enabled by Chinese tourists returning to Germany, while local consumption remained flat at best. And this dependency on Chinese demand highlights just one of the many industry challenges, affecting not only the German but the global market. Three others to list are the increasing threats of the smartwatch, the growing online business and future consumers’ demographics.

Increasing threat of the smartwatch

In its recent study, the Watch Monitor 2017 by Responsio/ Sinus reveals for Germany that 51% of people questioned are ready to purchase a smartwatch and 14% already possess one. For those in the sample who are willing to spend more than 1,000 euros for a timekeeper, 12% even say that it will be sufficient for them to own a smartwatch only.

Even if the traditional watch industry were able to fill the developing deficit with its own smart offerings, fending off Apple, Samsung & co., any downturn will nevertheless further fuel the structural (and not just cyclical) problems of the mechanical watch industry. The German car industry, struggling with e-mobility, indicates the challenges ahead, as it has been a good benchmark to anticipate developments for the watch business over recent decades. And with a current global market share of smartwatches of less than 2%, it is unlikely that the established European watch brands will be able to catch up with the huge marketing and innovation machines of the IT giants.

Another challenge is online business. According to Bain, 8% of all luxury-related sales are already concluded online. And the German Watch Monitor 2017 confirms these numbers, at least for this major market. For the whole of the German population, 11% already purchase a timekeeper mainly online. For the exclusive segment of those willing to spend more than 1,000 euros for a watch, the number is an astonishing 17% (20% men, 13% women). Obviously, such figures indicate future disruptions in the German distribution system affecting especially brick-and-mortar stores – even if the willingness to buy at classical retailers is still the first choice for Germans according to the Watch Monitor 2017. And it can be assumed that if such future online business is not controlled by the brands, the notorious online discounting will put additional pressure on the industry’s revenues and profit margins.

Finally, the demographics will reduce the potential customer base. The United Nations estimates that the growth rate of people between 25-59 years, representing the strongest purchasing power, will be halved over the next three decades. In an aging society like Germany this is likely to happen – consumers having the money but being unwilling to spend it.

Given such impacting factors, The Bridge To Luxury estimates an industry compound annual growth rate of 3-6%, in Germany and worldwide, for the next five years, while long-term growth rates will likely fall below that range.

Despite such a challenging prognosis, there are plenty of opportunities for engaging brands. One future success factor will be the comprehensive use of market research data. A closer look at the German market shows, for instance, that young Germans in particular still consume print media (Watch Monitor 2017). Hence, players who dare to contradict the mainstream mantra that socalled millennials are using basically online information sources may gain surprising competitive advantages in targeting their marketing efforts better.

This applies also for the huge potential of marketing to the elderly. On the basis of such better consumer understanding, professional and strong emotional branding should be of highest priority – provided it is supported by sufficient budgets. And finally, a sharp focus on efficient and effective organisational set-ups alongside the whole value chains will help to keep costs for complex omnichannel communication and distribution under control.

Contrary to the relief of German industry representatives at Munichtime, the likely decreased presence of watch brands at Baselworld 2018 already hints that the challenges are here to stay. The hard work is still to come.