“A life outside of watchmaking”: we start this special series on the little-known facets and passions of industry personalities with Elie Bernheim. Raymond Weil’s director has just published his first novel (in French), which he wrote during an extended stay in New York. The plot combines gastronomy, music and love in the form of a diary – told chronologically, of course.

“A life outside of watchmaking”: we start this special series on the little-known facets and passions of industry personalities with Elie Bernheim. Raymond Weil’s director has just published his first novel (in French), which he wrote during an extended stay in New York. The plot combines gastronomy, music and love in the form of a diary – told chronologically, of course.
E

mployees of the Geneva-based family watch brand Raymond Weil discovered an unexpected new side to their boss when they learned this year of a novel signed by Elie Bernheim. “In watchmaking, as in any industry, we tend to put people in boxes,” confides the watchmaker and author, who recently turned forty. “I believe I belong to a generation that wants to try several activities simultaneously, and not limit themselves to just one role.”

Table pour trois à New York (“Table for Three in New York”), a 290-page novel written in the form of diary entries by the main characters, was published in the spring by Slatkine Publishing. Elie Bernheim wrote it during a year he spent in the Big Apple between 2017 and 2018 (the USA has long been Raymond Weil’s main market, ahead of the UK).

“I believe I am part of a generation that wants to try several activities simultaneously, and not limit themselves to just one role.” 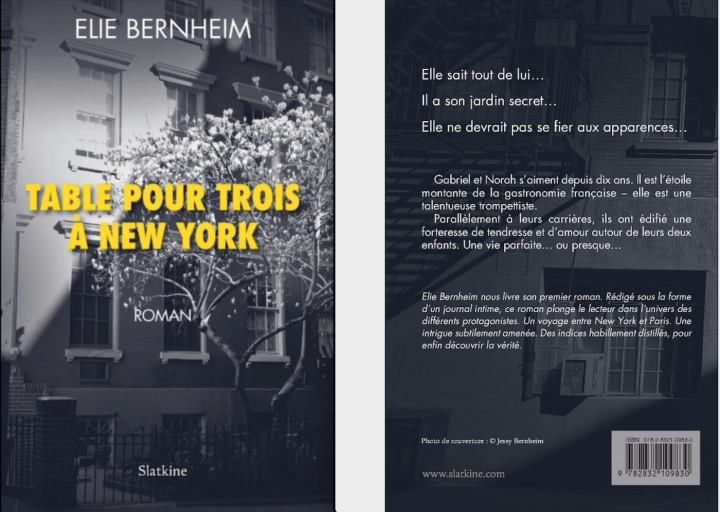 Elie Bernheim’s first novel is written in the form of diary entries that gradually reveal their secrets...

“I combined business with pleasure,” states the watchmaker/novelist, who didn’t wait for the coronavirus-led lockdown to put his free time to productive use. “Between all the plane journeys over the Atlantic and the harsh New York winter, after watching a few films and reading a few novels, I wanted to try a new experience. I’d been scribbling since I was a little boy, but I’d never had any ambition before.”

What began as a rough draft turned into a coherent narrative: in six months, the neophyte worked through his plot and gave birth to a polyphonic novel, set in Paris and New York. Back in Geneva, he anonymously sent the manuscript to the Slatkine publishing house. “I hesitated to send it, because maybe it was just a momentary lapse of madness! I used a pseudonym, both out of fear of negative feedback and to avoid my entrepreneurial profile influencing the publisher’s judgement.”

Elie Bernheim put a lot of himself into this page-turner that takes place in Paris and New York.

Despite not knowing the true identity of the author, the company directed by Yvan Slatkine was enthusiastic about this page-turner which takes place in the New World. Perhaps he was influenced by the phenomenal success of a book in similar vein by another Genevan, Joël Dicker, published by Les Editions de Fallois. Did Dicker’s breakthrough convince Elie Bernheim to take the plunge? Although he says he has “unbounded admiration” for Joël Dicker, a more important influence was author Marc Levy, whose style is both light and efficient.

Elie Bernheim has clearly put a lot of himself into his writing. “It is not an autobiography, nor is it autofiction, but I evoke themes and subjects that are dear to my heart,” he says. In fact, those who know him will note several familiar features: the main protagonist of Table pour trois à New York, Gabriel Stern, is the same age as the author (he is celebrating his 40th birthday, just like his creator), he is a talented chef (Elie Bernheim is passionate about gastronomy and has launched several restaurants in Geneva) and his wife is an accomplished trumpet player (music is the main inspiration for Raymond Weil’s watchmaking and the director is himself a cellist).

The meanders of family love, Jewishness, the process of grieving and the capacity for redemption are important components of the novel, which beats to the rhythm of a hectic metropolis. If you want to find out more about the plot, you’ll have to read it yourself!

The novel is also unusual in that it came out in the midst of a pandemic, a crisis that brought watchmaking – and the world – to a standstill, while pushing many, with the test of the lockdown, to revisit the notion of time and the meaning they give to their existence. For many, this work of “reinvention” included literature. Watchmakers question the meaning of time, writers question the meaning of life. With the publication of his first novel, Elie Bernheim navigates between two vocations that give free rein to the imagination.

ORDER THE NOVEL (IN FRENCH)

THE WATCH FILES The paradox of the supposedly forward-looking new networks is that they constantly plunge us into a distant and magnified past. The internet has given us (...)