Carl F. Bucherer has released its first model combining minute repeater, tourbillon and peripheral rotor. We take a look back at how this manufacture specialising in “peripheral technologies” has patiently built up its capabilities, with the help of Chief Technology Officer Samir Merdanovic.

Carl F. Bucherer has released its first model combining minute repeater, tourbillon and peripheral rotor. We take a look back at how this manufacture specialising in “peripheral technologies” has patiently built up its capabilities, with the help of Chief Technology Officer Samir Merdanovic.

fter an apprenticeship at ETA and work experience with Porsche Design and Eterna, Samir Merdanovic joined Carl F. Bucherer in 2017, where he now holds the position of Chief Technology Officer. With this brand he found plenty to fuel his passion for watchmaking R&D, as he arrived just after the inauguration of a new manufacture in Lengnau that brought together the brand’s various operations under one roof.

Since then, Carl F. Bucherer’s technical signature – the peripheral oscillating weight movement, which is particularly slim and allows the entire calibre to be seen, but is tricky to integrate with sufficient energy efficiency – has been applied to a growing number of models, in combination with various complications. 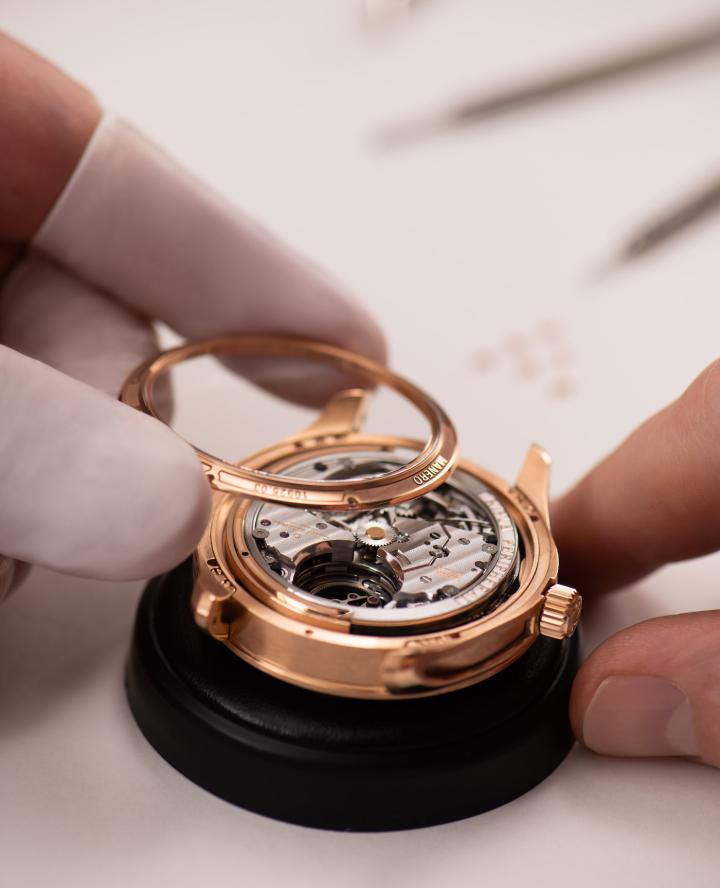 In 2008, Carl F. Bucherer was the first brand to incorporate a peripheral rotor into a series-produced watch. This was followed ten years later by a peripherally mounted tourbillon. Both technologies are combined with a minute repeater with peripheral mounted regulator in the new Manero Minute Repeater Symphony Triple Peripheral.

This “peripheral technology” reaches new heights of sophistication in the Manero Minute Repeater Symphony Triple Peripheral model, which was introduced at the latest edition of Watches and Wonders. Equipped with the most complicated movement ever produced by Carl F. Bucherer, the MR3000 features not only a peripheral winding system and a peripherally suspended floating tourbillon, but also a minute repeater with peripheral mounted regulator. Samir Merdanovic tells us more about these important developments.

The peripheral oscillating weight movement, which is particularly thin, allows the entire calibre to be seen, but is difficult to integrate with sufficient energy efficiency. Carl F. Bucherer has met this technical challenge. 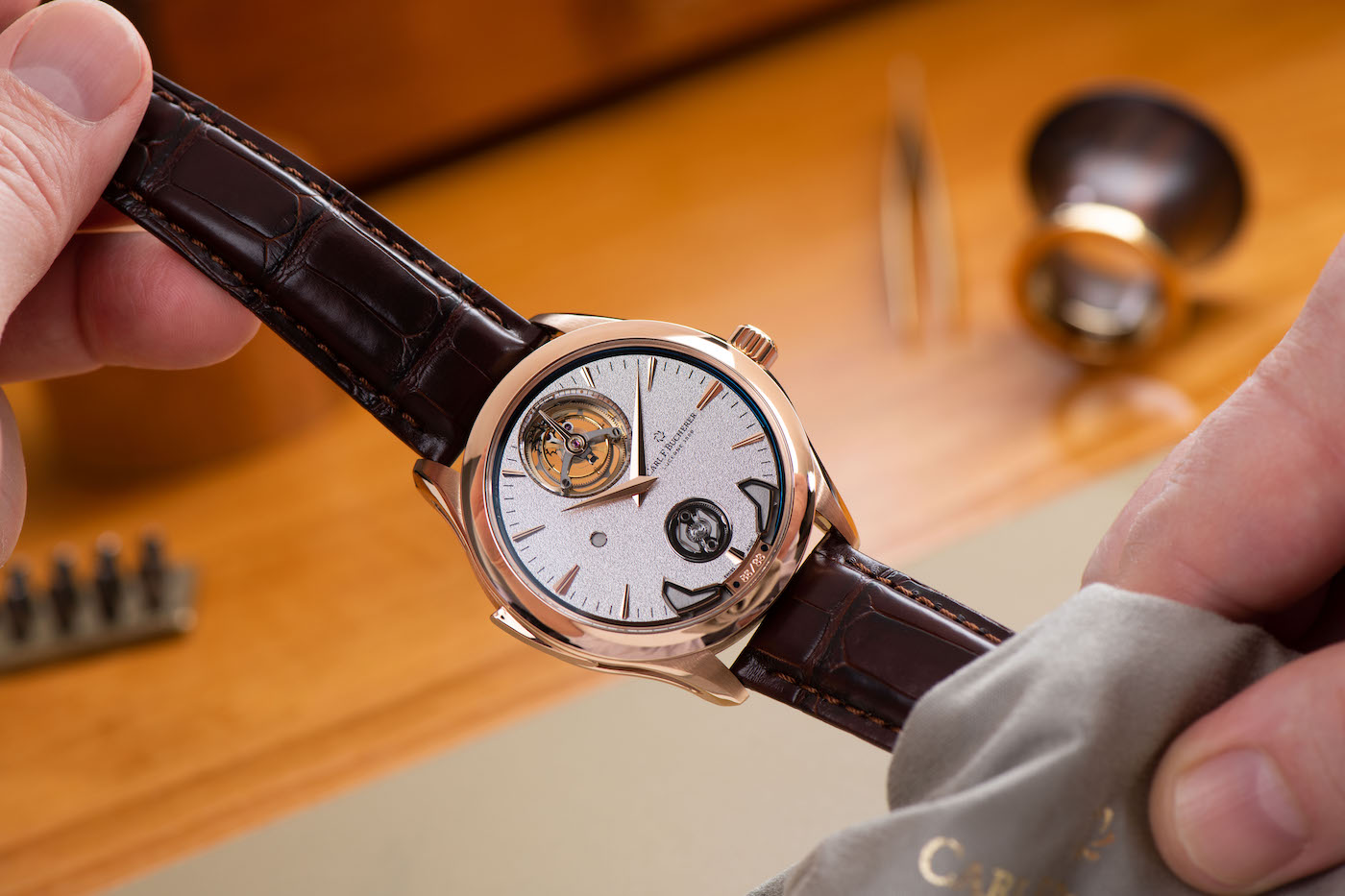 Europa Star: What were the main steps behind the transformation of Carl F. Bucherer into a manufacturer specialising in peripheral technologies?

Samir Merdanovic: A key moment was the development of the first patented movement with a peripheral oscillating weight, the CFB A1000, in 2008. That was the first time such a calibre had been used in series production. A second highlight was the launch of our CFB A2000 calibre, also with peripheral rotor, in 2016, which coincided with the consolidation of all our technical activities under one roof in our new manufacture in Lengnau. The CFB A2000 is now our manufacture base calibre, to which we can make numerous modifications.

In a more high-end segment, we have also introduced a calibre incorporating both a peripherally suspended floating tourbillon and a peripheral rotor, the CFB T3000. This is our other major movement family, which is the basis for this year’s Manero Minute Repeater Symphony Triple Peripheral. With this piece, we set ourselves the goal of creating the most complicated timepiece in our history, because we now have a great deal of expertise in manufacturing movements with peripheral technologies! In this way we continued to invest, even during Covid. In this new model, whose movement has a completely peripheral architecture, we combine an automatic calibre with a tourbillon and minute repeater. 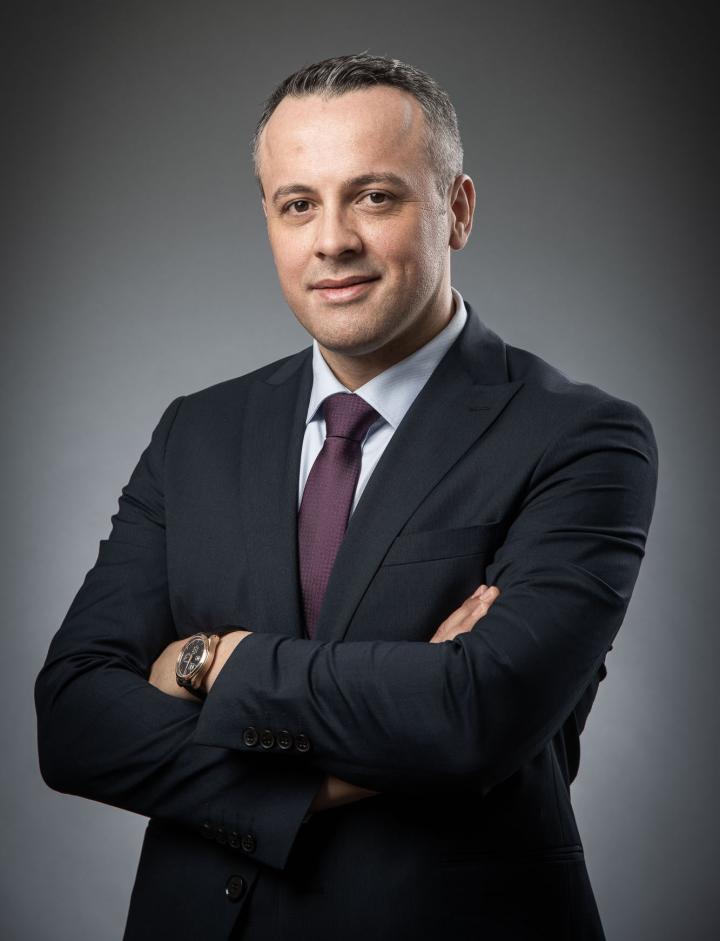 What exactly is a “floating tourbillon”?

The tourbillon, visible from both sides, gives the impression of “floating” freely at 12 o’clock. There is no upper or lower bridge: the tourbillon cage is supported peripherally – and invisibly to the observer – by three ball bearings. We introduced this patented innovation in 2018, in our Manero Tourbillon Double Peripheral model.

“With this piece, we set ourselves the goal of making the most complicated timepiece in our history.” 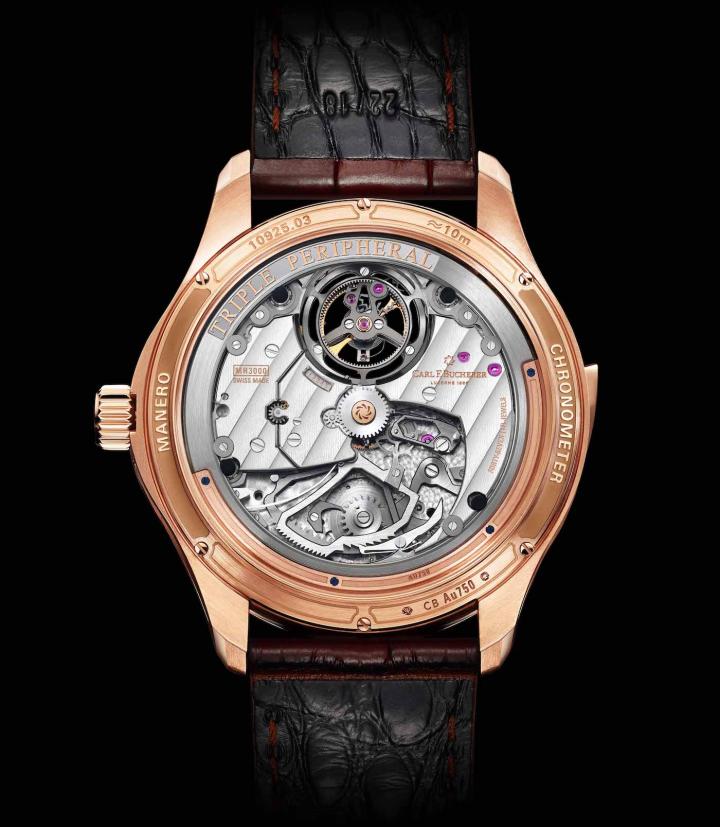 The elaborately finished and COSC-certified Manufacture Calibre MR3000 has a power reserve of 65 hours.

This year, you are moving to a “triple peripheral” technology. What does that mean? 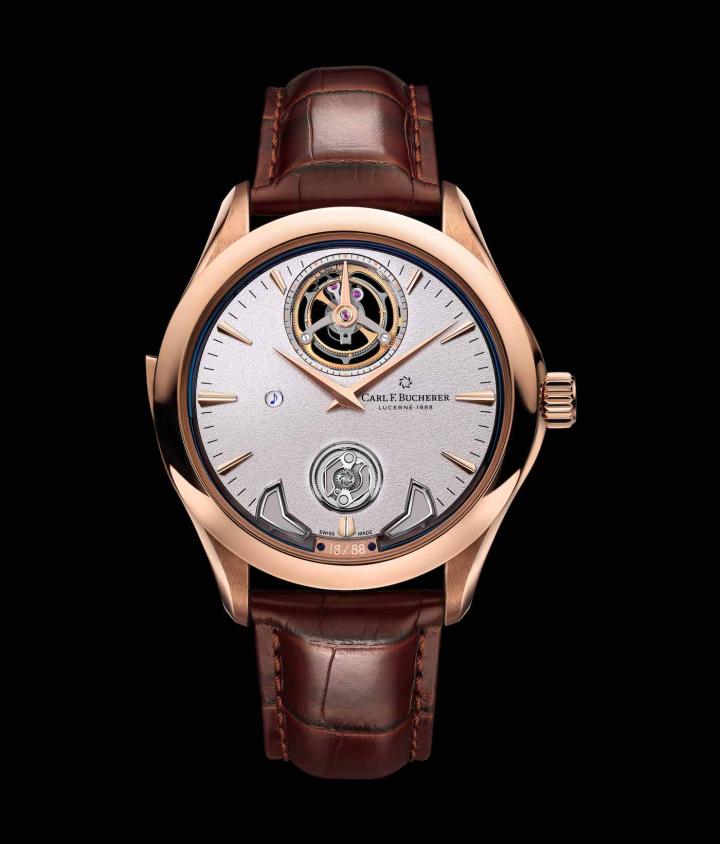 The classically elegant timepiece is clad in a 43.8 mm diameter case made of 18-karat rose gold, with openworked, hand-chamfered lugs. 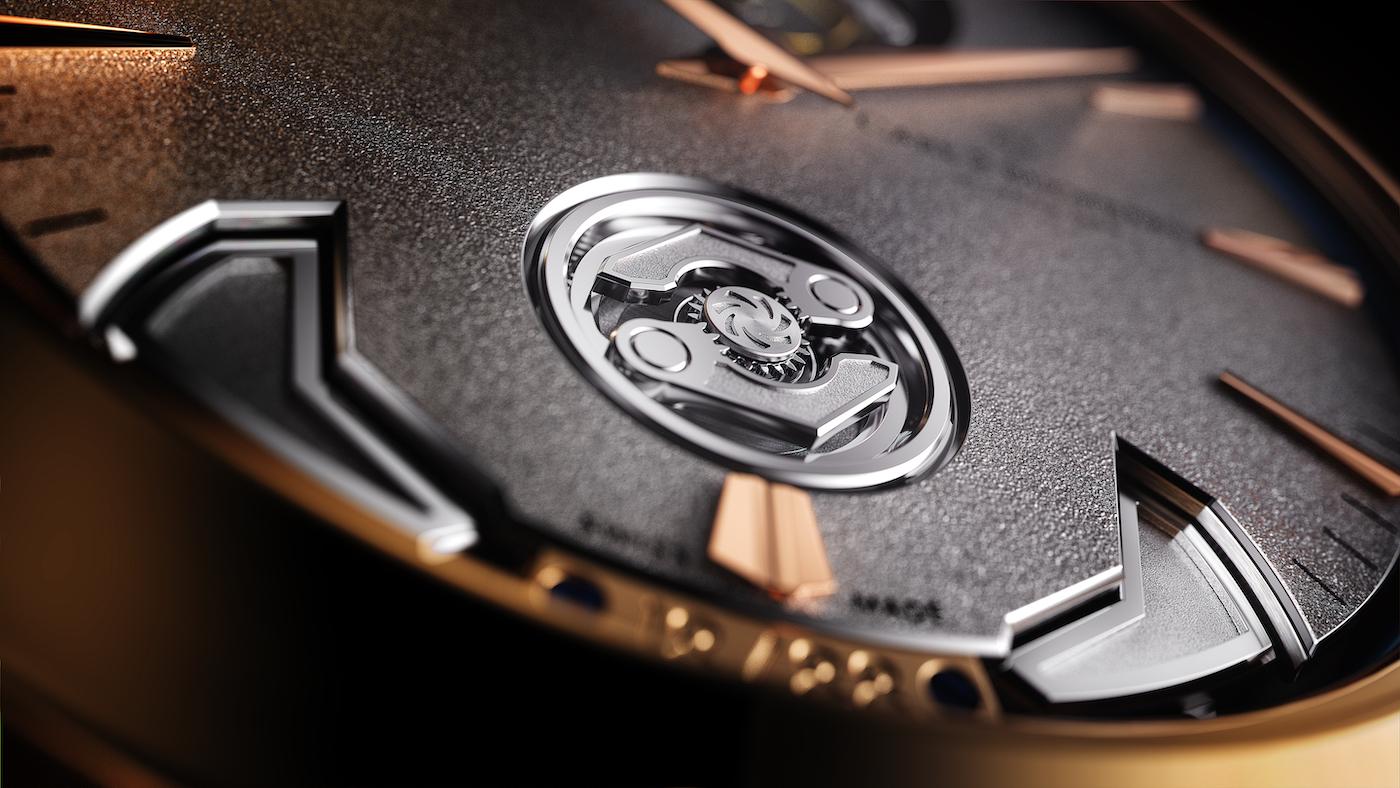 How did you build this minute repeater?

Its mechanism is orchestrated to produce two different tones on two gongs which, along with the sculpted hammers, can be seen through cutouts at the edge of the dial. They are complemented by openings at 5 and 7 o’clock, through which the hammers can be observed as they strike. A window above 6 o’clock showcases the watch’s innovative regulator, which sets the beat of the chimes. This patented regulator is mounted peripherally via three low-friction ceramic ball bearings. Our expertise in the floating tourbillon clearly helped us in developing the peripheral architecture of the minute repeater mechanism*. For a minute repeater, the case is also a very important element, both in terms of ensuring water resistance, but also to create volume, as a resonance chamber for the notes. 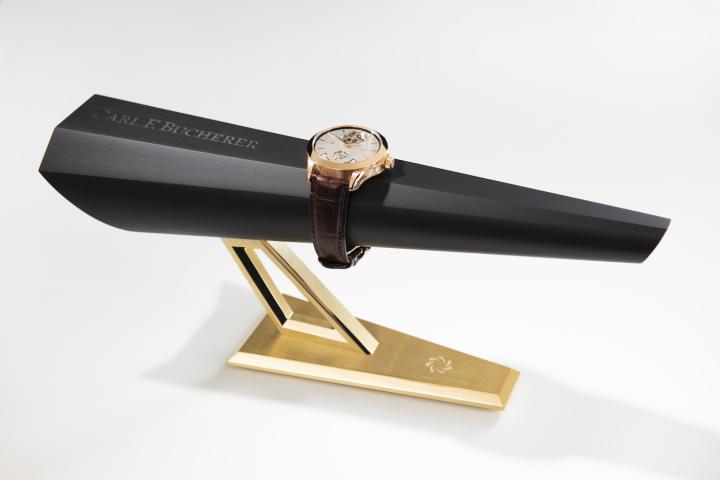 The Manero Minute Repeater Symphony Triple Peripheral comes with a specially designed resonator, an amplification system that doubles the volume of the minute repetitions.

What are your production capacities for the Manero Minute Repeater Symphony Triple Peripheral?

This year we will be able to produce several timepieces based on demand from our customers. The demand is high, but we can’t go any faster; each gong is adjusted manually. Moreover, we offer the possibility to customise not only the design of the models, but also the gongs, which means clients can create their own “sound”. This is a truly personalised model. 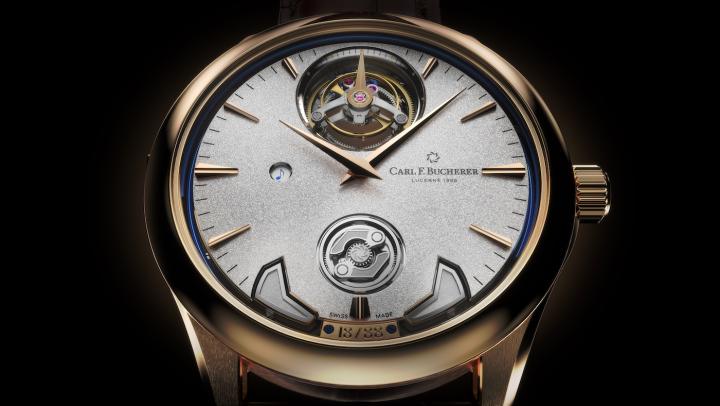 Inspired by this minute repeater, the young Swedish composer Lisa Streich wrote a piece named “Periphery”, commissioned by the Lucerne Festival, which was premiered at this year’s Watches and Wonders. 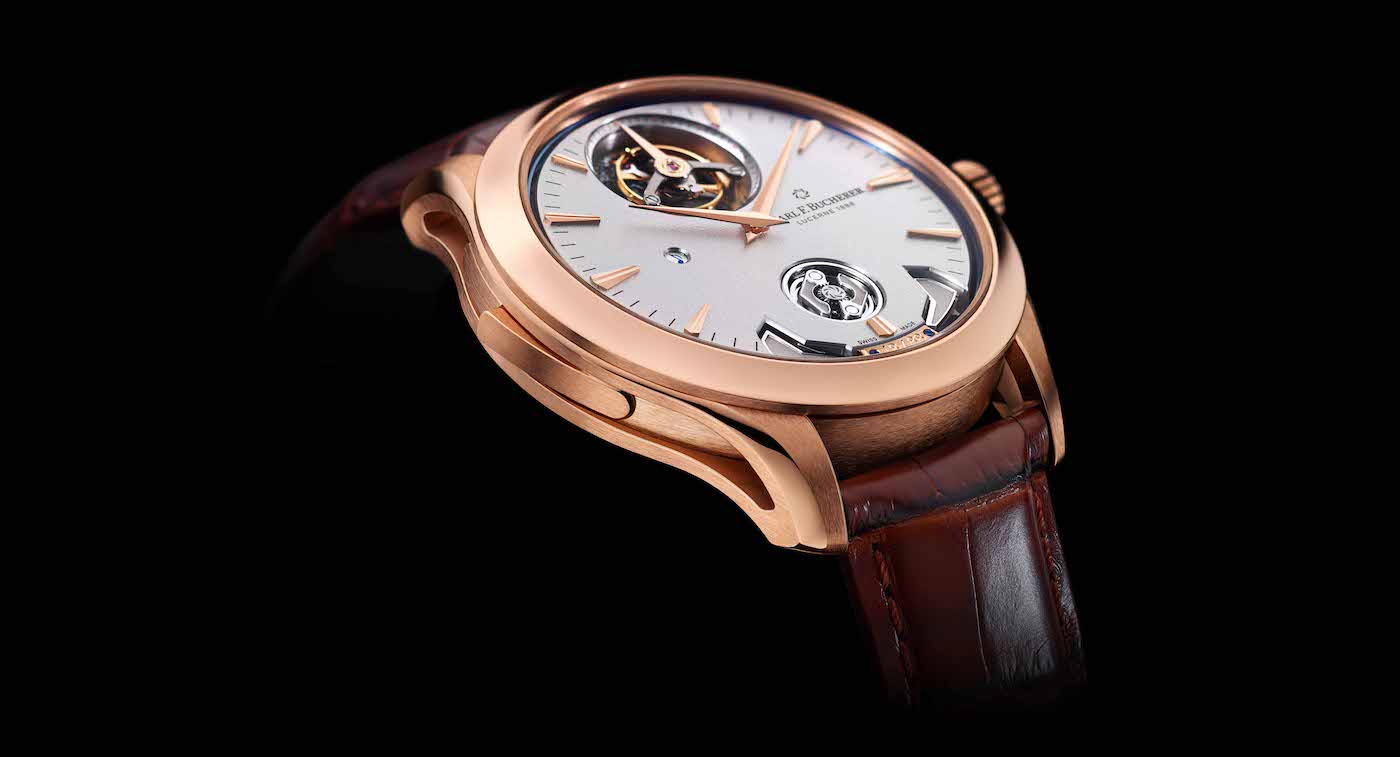 This year you are also launching a new vintage-inspired model, a chronograph with a “reversed panda” dial in your Heritage line.

Yes, we had great success with the first series of the Heritage BiCompax Annual chronograph. And the advantage we have is that we can draw on the thousands of timepieces in our museum for inspiration. In the 1960s, Bucherer produced 40,000 chronographs a year. It is interesting to note that the identity of the different brands on the market today is much clearer. Back then, there were many watches that were very similar from one watchmaker to another. 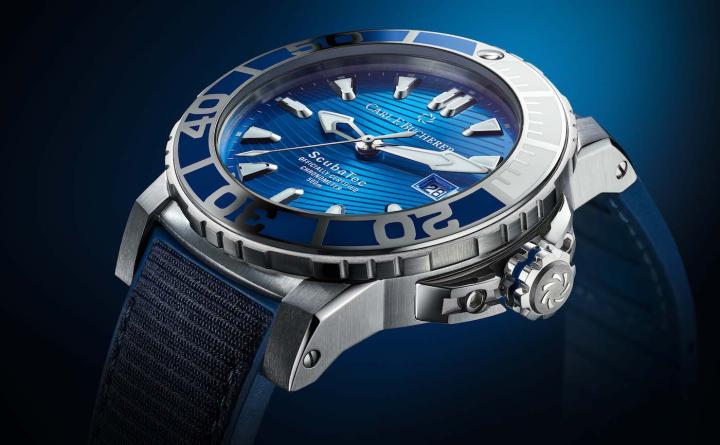 The ScubaTec Maldives is the fourth watch Carl F. Bucherer has launched in partnership with the Manta Trust since 2017.

As far as sports watches are concerned, you are introducing the Patravi ScubaTec Maldives model, in partnership with the Manta Trust Foundation. Can you introduce it to us?

It’s been eight years since we initiated this partnership, and back then there was much less talk of ecology in watchmaking than there is today. With each new model, we ask the same question: how can we best support them? This year’s model will allow them to partially finance a floating research station for manta rays in the Maldives. We also decided to use recycled material from PET bottles for the bracelet. We have a lot of discussions about recycled materials. You become more aware of these issues by working with them. *A protective mechanism built into the movement prevents inadvertent misuse. A discreet display at 9 o’clock indicates the current mode of the watch: a blue dot shows that the crown is pulled out, and a musical note lets the wearer know that the minute repeater function is activated.