The Federation of the Swiss Watch Industry unveiled the export figures for the whole year 2021. Performance was driven by very strong growth in the United States, alongside a steady upward trend in China, while numerous other markets continued to face sometimes significant difficulties.

The Federation of the Swiss Watch Industry unveiled the export figures for the whole year 2021. Performance was driven by very strong growth in the United States, alongside a steady upward trend in China, while numerous other markets continued to face sometimes significant difficulties.
A

ccording to the latest figures unveiled by the Federation of the Swiss Watch Industry, 2021 saw a faster than expected recovery for Swiss watch exports. Performance was driven by very strong growth in the United States, alongside a steady upward trend in China, while numerous other markets continued to face sometimes significant difficulties.

The return to pre-crisis levels as early as September and positive performance in the fourth quarter produced the best-ever annual results for the sector, at 22.3 billion francs, 2.7% higher than in 2019 (+31.2% compared with 2020) and a 0.2% improvement over the 2014 record. While the Covid-19 pandemic continued to make its presence felt throughout the year, its consequences for the watch market proved less severe.

Overall, luxury personal goods benefited from the sharp increase in demand in China and the United States, additional opportunities created by digitalisation, the use of savings accumulated during the various lockdowns and more significant restrictions on luxury experiences, particularly tourism-related activities. While travel retail suffered from the decline in tourism, an increase in domestic purchases, a switch to digital channels and the development of the duty-free market in Hainan offset losses to some extent.

Despite the encouraging results overall in 2021, stark discrepancies exist between the various actors in the luxury sector and in Swiss watchmaking. Growth is being driven more by a set of brands than by product categories as in the past, while others are proving less successful and in some cases, suffering significant declines. The same polarisation is being seen in markets and price segments, as evidenced by the decline in volumes. This can be explained in part by current economic factors associated with the pandemic – which are by definition temporary – but also, more worryingly, by structural changes, to which the sector must respond and adapt. 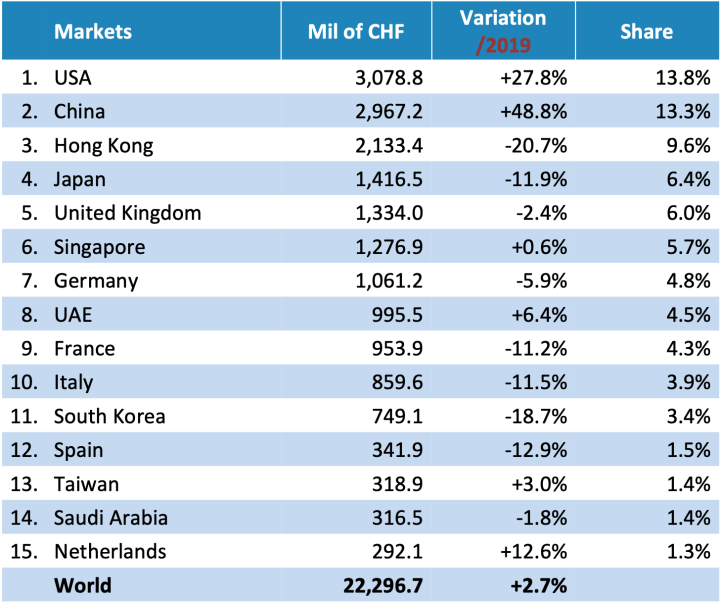 In spite of the still precarious health situation and less favourable macroeconomic prospects for the main markets, luxury personal goods should see increased demand in 2022. The strong results achieved last year – and even earlier, in 2020, in China – will nonetheless create a slightly unfavourable base effect. Given these factors and a still significant degree of uncertainty, the forecasts for Swiss watch exports are based on cautious optimism.

All the figures released by FH refer to exports data and not to sales to end-consumers. Differences between these two types of data may therefore exist. These data must be regarded as consolidated figures gathering export results from all Swiss watch companies. They obviously cannot reflect the individual results of one particular company or group of companies, knowing that business activity may greatly vary from one to the other.

Among the main regions, America (+21.7% compared with 2019) recorded the strongest growth thanks to the United States, absorbing 17% of Swiss watch exports. In Asia (+1.0%), growth in China was offset by often marked declines in most other markets on the continent. Its market share was 52%. Europe fell overall (-3.4%), with a market share of 29%.

The United States (+27.8%) witnessed remarkable growth throughout the year and was once again the leading market for Swiss watch exports. China (+48.8%) came in just behind, thanks to continuing steady growth. Between them, these markets represented 27% of total value and accounted for most of the growth observed.