The recurring theme at Richard Mille is the reconciliation of lightness and toughness. And that they achieve by bringing new materials to watchmaking, from carbon and titanium right through to graphene. Europa Star had the opportunity to explore the workshop of Richard Mille in the Jura. Here’s what we saw.

The recurring theme at Richard Mille is the reconciliation of lightness and toughness. And that they achieve by bringing new materials to watchmaking, from carbon and titanium right through to graphene. Europa Star had the opportunity to explore the workshop of Richard Mille in the Jura. Here’s what we saw.
I

f you were asked to name one brand at the cutting edge of research into innovative materials, this would no doubt be it. The new horological direction taken by the company headquartered at Les Breuleux since 2001 is a closely interwoven mix of new shapes, bold aesthetics and new materials.

The brand is thus a pioneer of the application in watchmaking of new types of carbon, new uses of sapphire and, more recently, the introduction of graphene, partly thanks to its partnerships in the aeronautics (Airbus Corporate Jets) and automobile (McLaren) industries, where these new materials were integrated long ago. On arriving in the brand’s premises in the Jura, the first thing you notice is the ongoing extension of the production facilities. Valgine, ProArt and Horométrie – which handles the distribution of the watches – are grouped together under the Richard Mille entity. And so the visit begins.

Valgine and ProArt, the two pillars of Richard Mille

Valgine was founded more than a century ago by the family of Dominique Guenat, Richard Mille’s associate since the start of the venture. This is where the watches are assembled, but also dreamed up, since the building houses the company’s technical office with its workforce of some 20 people. The place is steeped in history, Valgine having for a long time supplied movements to the great names in local watchmaking before switching to private-label business. It was while working for Mauboussin, then a customer of Valgine’s, that Richard Mille made the acquaintance of Dominique Guenat. Just opposite stand the ultramodern premises of ProArt, a structure founded in 2013 and in charge of producing the watch cases as well as machining certain components, such as the baseplates and bridges. The only exception, entrusted to third-party suppliers, is the design of the sapphire cases. The Les Breuleux production site employs a total of some 150 people, “including more than 50% from the Franches-Montagnes district,” we are told, underscoring the brand’s claim to be firmly rooted in its region while pushing back the limits of watchmaking creativity and decorating the wrists of the planet’s new elite.

The exercise at hand – that of combining the rigour of Jura watchmakers with its founder’s sense of style in immediately identifiable models at way-aboveaverage prices – has so far been highly successful for Richard Mille: last year, when the industry was only just starting to recover from the previous four lean years, its production rose from 3,500 to 4,000 watches. And Richard Mille intends no fewer than 4,600 models to leave its workshops this year.

Since 2001, the company has developed seven in-house movements. “Here, the employees assemble watches from A to Z, unlike the way other brands operate,” underscores Julien Boillat, technical director at Valgine.

One team is devoted to movements and another to the cases. Four watchmakers are specifically responsible for the tourbillons. The brand also works closely with three calibre specialists: Vaucher Manufacture, Dubois Dépraz and Renaud Papi. “Currently, Renaud Papi supplies us with tourbillons, but we’ll soon have our own in-house tourbillon,” explains Julien Boillat. 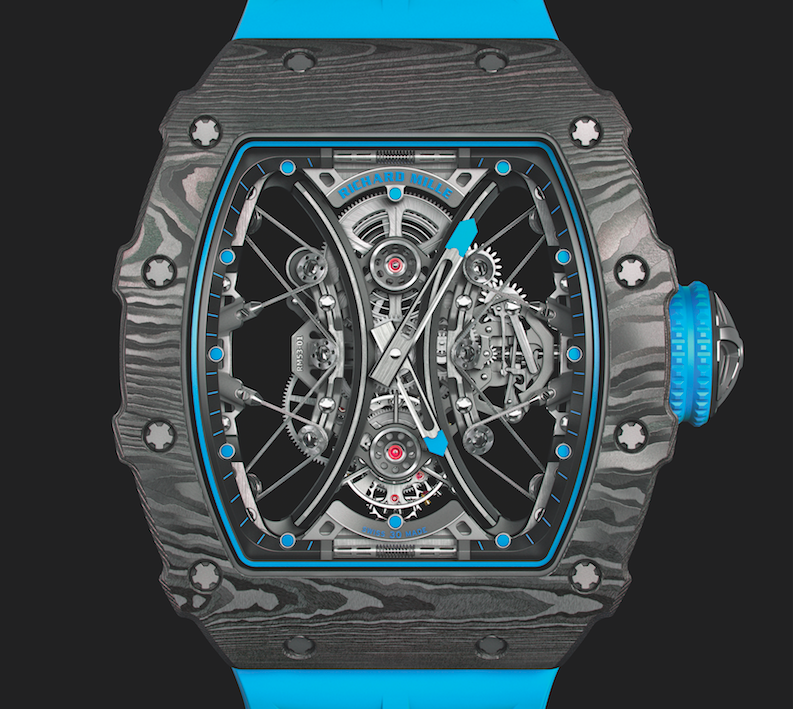 This increase in production goes hand in hand with unflagging research into materials. “At this very moment we’re following up three or four leads on new materials currently used in other sectors and that we’re going to introduce into watchmaking,” explains Julien Boillat. “That’s what we did for example with the titanium-aluminium used by Airbus, and the Carbon TPT® used in yachting and F1. We’re testing the machining of these innovative materials thanks to our modern fleet of machines.”

One turning point in its research into materials was achieved in 2013 with the collaboration between Richard Mille and the company NTPT® (standing for North Thin Ply Technology), based in Renens. This company is best known for developing the ultralight black carbon fibre used in Alinghi yachts.

“At this very moment we’re following up three or four leads on new materials currently used in other sectors and that we’re going to introduce into watchmaking.”

Incidentally, part of one such vessel’s famous black mast is still to be found at Richard Mille, used by the brand for its primary carbon tests. Some 2,000 cases in Carbon TPT® composite are set to be produced at ProArt this year, which accounts for around 40% of all its cases. Yet carbon is a highly abrasive material that makes it difficult to machine. The solution is to use tools – coated in gold. Even so, each tool has to be replaced after machining twenty components. It was of course on the wrist of Rafael Nadal that the model RM 35-01 in black Carbon TPT® , composed of 600 parallel layers of the material obtained by splitting carbon fibre, was spotted in 2014.

These different “levels”, no more than 30 microns thick, are then impregnated with resin before being “woven” on a dedicated machine that changes the angle of the weft between the carbon layers to 45°. Heated to 120°C at a pressure of 6 bar, the carbon is then ready to be processed on ProArt’s CNC machines to form the case.

The quest for lightness

So what are the advantages? According to the brand, Carbon TPT® reduces the risk of micro-fractures in the material by 25% and the appearance of micro-fissures by 200% compared with other composites. But above all, and more globally, carbon is appreciated for its lightness and toughness – two criteria that you would be justified in citing as Richard Mille’s leitmotivs. Not to mention the aesthetic qualities of the machining peculiar to this material.

The lightest material made by the brand, the 27-01 Tourbillon Rafael Nadal, which weighs in at less than 19 grams, has a case of very low-density carbon nanotubes. Note also that its movement is made in titanium and Lital® , a lithium alloy containing aluminium, copper, magnesium and zirconium and used in numerous aeroplanes, including the A380, helicopters, rockets, satellites and Formula 1 racing cars. It doesn’t get more Richard Millesque than that!

Quartz as you’ve never seen it before

But that’s not all. Together, Richard Mille and NTPT® went on to develop a new material, coloured Quartz TPT®, which is made up of quartz fibres applied in successive layers. Once again, the first watch made using this new material was sported by Rafael Nadal in 2015.

The manual-wound tourbillon calibre and unibody baseplate in Carbon TPT® of the RM 27-02 are set in a case made of a carbon and quartz mix. The technology used to design and machine this material is close to that already employed for Carbon TPT® , but even more complex: more than 600 layers of quartz threads are saturated with white resin, then interposed between the layers of Carbon TPT® in a procedure that changes the orientation of the fibres between two layers by 45°.

“Our new fleet of machines will allow us to machine more coloured Quartz TPT® , production of which is still tiny compared with our cases in titanium and gold,” stresses Julien Boillat. The colours produced to date include yellow and red, white, orange and blue. Besides these aesthetic properties, a quartz case also provides greater resistance to electromagnetic waves. As you might have realised by now, close observation of Rafael Nadal’s wrist on the clay courts of Roland- Garros can reveal some surprises in terms of materials – and that includes the strap. The brand first began fixing its champion’s wrist strap with Velcro in 2010.

Why? “Rafael Nadal plays his backhands with both hands, and the buckle hurt him,” explains Julien Boillat. “Moreover, these wrist straps are very pleasant to wear and can be adjusted with great precision.”

Another model that marked a turning point for the brand in terms of materials research, also in partnership with NTPT® , was the RM 50-03 McLaren F1, presented at the SIHH in 2017. This is the lightest split-seconds chronograph tourbillon in the world (38 grams) and above all, the first instance of graphene in a watch. This new material has been the object of much fantasising since it was synthesised in 2004 by Andre Geim at the University of Manchester, because it has very high thermal conduction.

Many scientists already see it revolutionising energy storage in the world of the future, among many other possible applications. For horological purposes, the brand points out that graphene’s resistance to breakage is 200 higher than that of steel, while being six times lighter. The Graph TPT® case is made by injecting graphene into the carbon to make it lighter and tougher. More precisely, the graphene is injected into the resin in which the carbon fibres are steeped.

Sapphire and other materials

Richard Mille was also one of the pioneers of sapphire cases, with the launch of the RM 56-01 Tourbillon Sapphire at the SIHH in 2012. Composed of crystals of aluminium oxides containing traces of other oxides to give it its colour (titanium and iron for blue, vanadium for purple, chrome for pink, iron for yellow and green), sapphire is particularly prized for its transparency. It requires very delicate machining – count 1,000 hours of work to produce one sapphire case. Its price is well over the million mark.

As for titanium, it is virtually a traditional material at Richard Mille. It featured in the very first watch showcased by the brand in 2001, the RM 001.

At the last edition of the SIHH, the brand highlighted the toughness of the sapphire crystal of its RM 53-01 Tourbillon Pablo Mac Donough model. The watchmaker has patented a laminated sapphire glass designed to withstand the shocks liable to occur during a game of polo.

And so each and every watch component passes through the brand’s R&D laboratories, where the aim is to reconcile what previously appeared to be irreconcilable opposites: lightness and toughness. But this research also means an extremely high unit production price. And so far, the brand is unrivalled on that score.