atchmakers did not need Einstein to intuitively understand that time and space are closely associated, like the two faces of the same coin.

Montblanc Heritage Spirit Orbis Terrarum UNICEF
The central sapphire disc shows the Earth’s northern hemisphere as seen from the North Pole. The second disc indicates the passage from day to night, passing through dark blue, yellow and green shading. On a ring, this same disc shows the names of the 24 cities representing the 24 time zones. The local time of the city facing the red triangle at 6 o’clock is read on the central hour and minute hands. The times in the different time zones can be read simultaneously from the 24-hour ring around the outside of the dial. 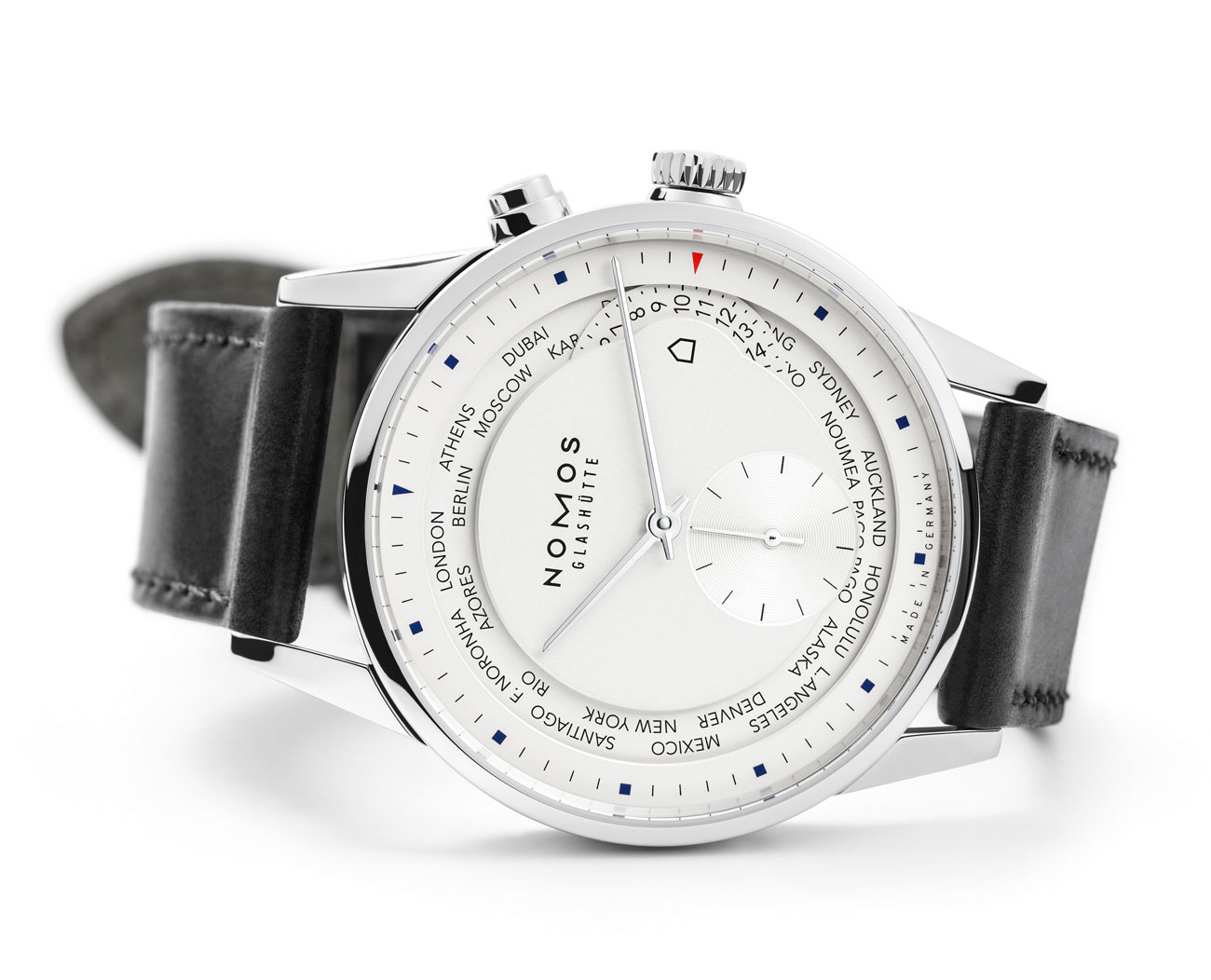 Nomos Zürich World Timer
24 watches in one: with this frequent flier on your wrist, you can travel the world in the push of a button and keep track of the time wherever you are. Also useful for those staying at home, surfing the internet, or calling friends on the other side of the world. The NOMOS caliber 5201 movement is equipped with a bidirectional winding rotor, tempered blue balance spring, movement number visible on three-quarter plate, Glashütte ribbing and sunburst decoration, 26 jewels.

Jaeger-LeCoultre, Geophysic Tourbillon Universal Time
The central disc, which shows a polar projection, rotates in 24 hours, taken on its journey by the flying tourbillon with its Gyrolab balance wheel. The carriage of the latter rotates upon itself every minute, while the orbital tourbillon completes one rotation in 24 hours –symbolising the starting point of our 24 time zones, which are indicated on a concentric ring encircled by the day/night indicator of the 24 hours. All its functions are adjusted using the single crown. 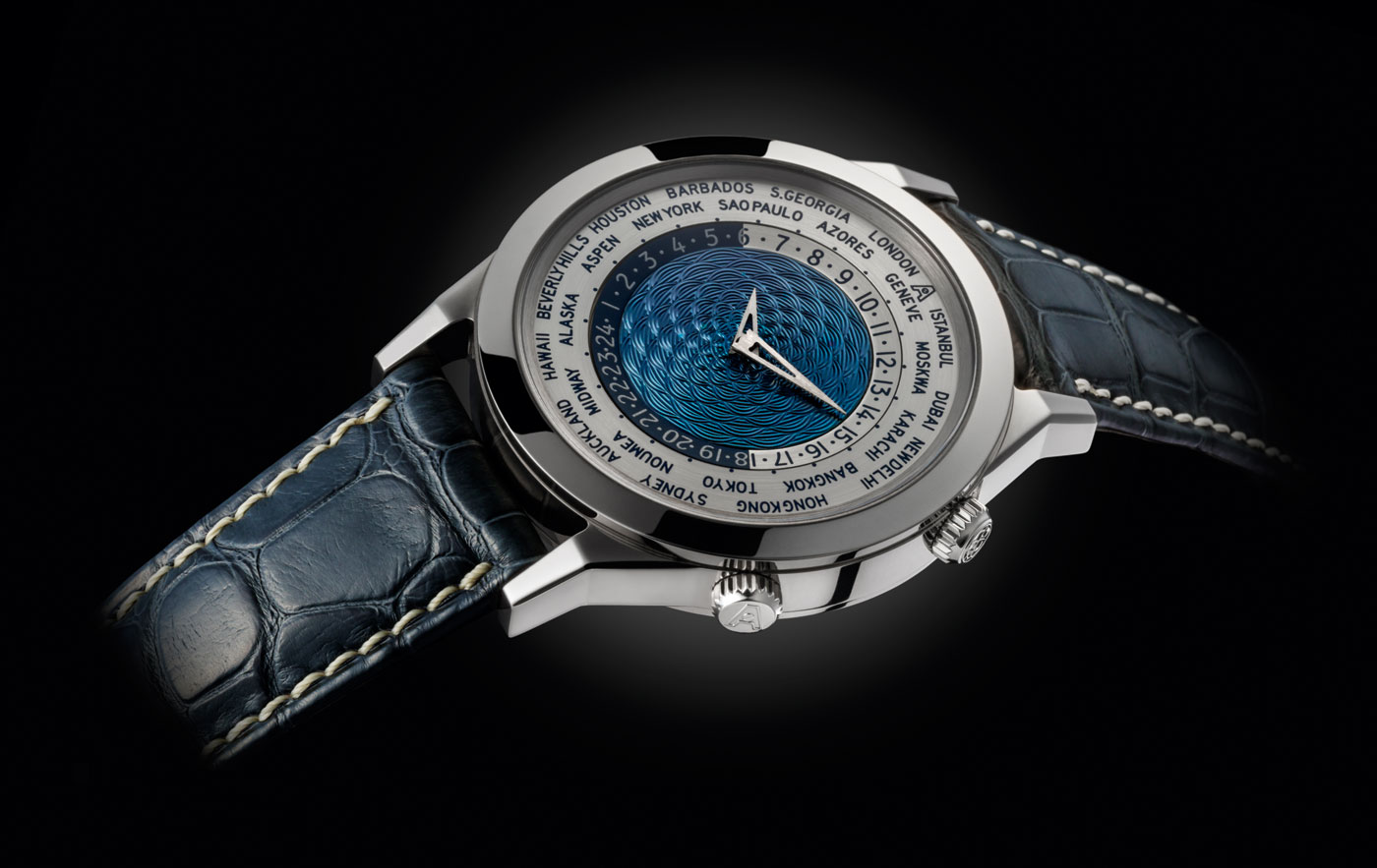 Andersen, 25 years of world time
In 1990, Sven Andersen presented his first ‘World Time Watch’ in tribute to the eponymous watch by Louis Cottier. He produced several successive iterations of it: the Christophorus Colombus, the Mundus and the 1884. In 2015, he once again commemorated Louis Cottier, presenting a ‘worldtimer’ with two crowns, as developed by the genius watchmaker. Finally, to mark the 25th anniversary of his World Time watches, Andersen has just released the Tempus Terrae 25th Anniversary. 25 pieces in white gold. The central disc has a magnificent luminous guilloché pattern with concentric scales in blue gold, symbolising the planet on which we live. The watch is adjusted using the two crowns, one setting the hours and minutes, the other the time zone.

Girard-Perregaux, WW.TC Perpetual Calendar
The exclusive combination of 24 time zones and a perpetual calendar – relating to the home time – was premiered in 2006 by Girard-Perregaux as part of its WW.TC collection, standing for World Wide Time Control, an appellation with greater ‘Wall Street’ appeal than the simple ‘World Time’. A moon phase rounds out the numerous indicators on the beautifully balanced, 41mm-diameter dial.