Following the Récital 26 Brainstorm® Chapter One, a new timepiece is introduced, fitted with a sapphire crystal case in the emblematic writing case with an asymmetrical profile of Bovet. A piece of horological art.

Following the Récital 26 Brainstorm® Chapter One, a new timepiece is introduced, fitted with a sapphire crystal case in the emblematic writing case with an asymmetrical profile of Bovet. A piece of horological art.
T

he Brainstorm Chapter Two is the second timepiece in the Bovet collection to be fitted with a sapphire crystal case in the emblematic writing case with an asymmetrical profile imagined by Mr. Pascal Raffy in 2016. The slope of its bezel allows the collector to explore new display mechanisms that guarantee intuitive and increased readability. Concentric rollers, rotating domes, and three-dimensional needles were used to express time in new ways. 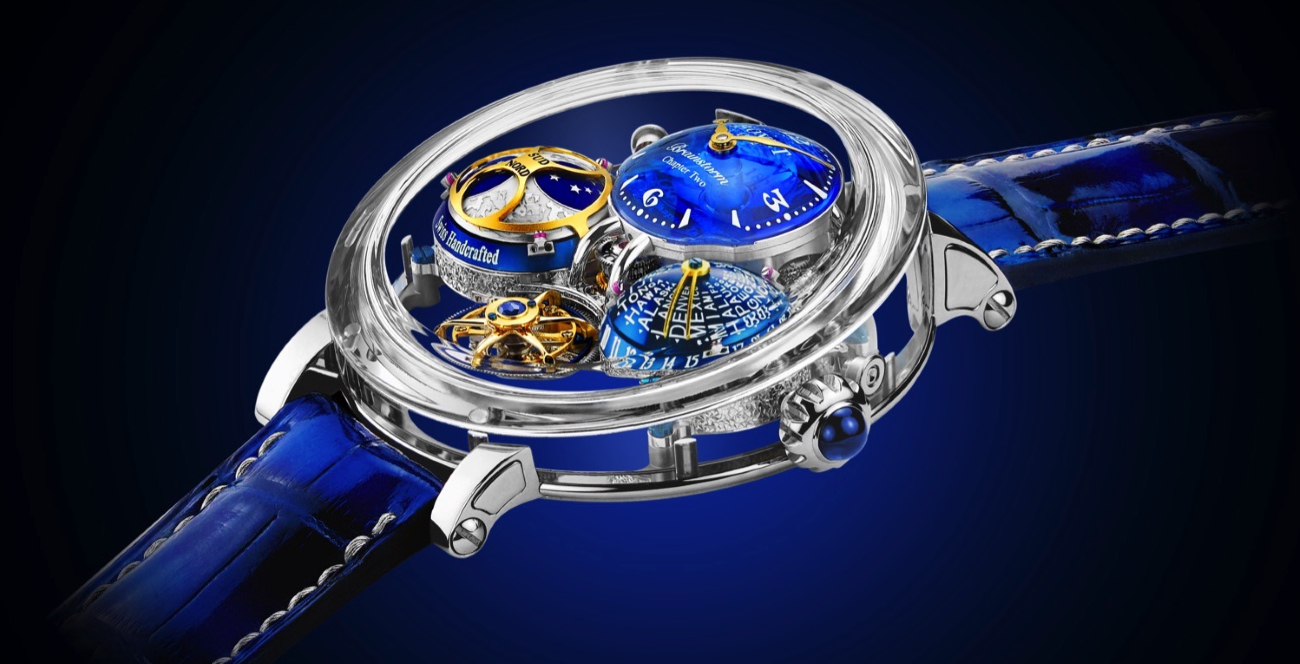 The collector will discover the complexity of precious watchmaking mechanics from a new angle where the decorative arts illuminate the third dimension in a vision previously unexplored.

Anxious to offer useful functionalities in absolute coherence, Mr. Pascal Raffy and the development department of the House of Bovet have imagined a movement that justifies the use of the “writing slope” case entirely made of sapphire. Selected for its crystalline transparency, sapphire is, moreover, the second hardest material known after diamond and, a little known fact, it is lighter than titanium. This unprecedented choice immediately revealed one of the major challenges faced by the technicians at the House of Bovet.

The brand has imagined a movement that justifies the use of the “writing slope” case entirely made of sapphire. 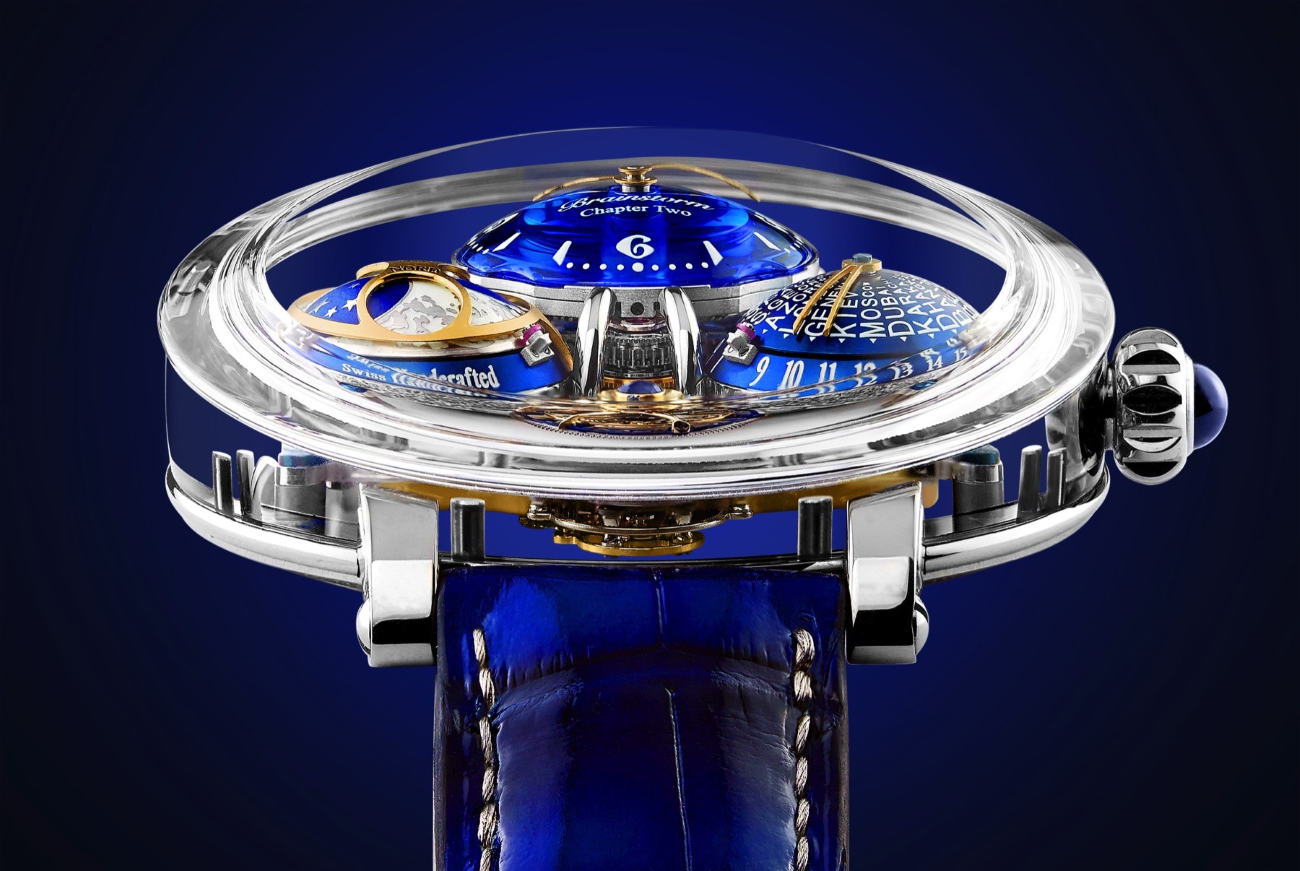 Sapphire cases have been known for almost forty years, however, their designs have remained relatively simple, because of the machining and polishing constraints due to the hardness of the material.

Ultimately, the middle and the glass form only one single element, 47.80 in diameter, which meticulously respects the original design of the cases in the collection. The back is made up of a bezel and four horns machined from grade 5 titanium. The sapphire crystal case opens generously to display the movement which has many secrets to reveal. To optimize transparency and ergonomics, the watchmakers of the House of Bovet decided to fix the movement at the bottom rather than inside the middle, as is usually the case.

The fully developed calibre for this Brainstorm Chapter Two is entirely manufactured in the Bovet 1822 workshops and is the result of a new design. Absolute control of energy guarantees an autonomy greater than five days of power reserve, which maintains the oscillations of the regulating structure at a frequency which has been increased to 21,600 v/h for spectacular chronometry enhanced by the patented double-sided flying tourbillon.

A dome dial displays the hours and minutes of local time in the upper part of the case. The seconds are read by an index fixed on the tourbillon, itself, placed at 6 o’clock which makes a complete revolution, in 60 seconds. Finally, two rotating domes placed, respectively, at 3 o’clock and 9 o’clock harmoniously complete the shaping.

The dome, located at 3 o’clock, displays a second time zone, according to the construction, specifically developed for this timepiece and subject to a patent. The names of 24 cities representing the time zones are printed on the rotating part of the dome which makes a complete revolution, by scanning the 24-hour graduation of the base ring.

A dome dial displays the hours and minutes of local time in the upper part of the case. The seconds are read by an index fixed on the tourbillon, itself, placed at 6 o’clock which makes a complete revolution, in 60 seconds.

A three-dimensional V-shaped needle allows the collector to select the displayed time zone. This clever and innovative combination, united with the dome, allows optimal readability, despite the reduced diameter of the entire display. In addition to a second time zone display, this new display also offers the world time function, which allows the time in each of the 24 time zones to be read simultaneously.

﻿In perfect symmetry, the moon phase indicator is positioned at 9 o’clock and is also displayed by a rotating dome. The surface of the lunar ground is engraved by hand before luminescent material is applied, also, by hand. The two circular windows which overhang the dome make it possible to read the age of the moon according to the specific orientation of its crescent, whether one is in the northern hemisphere or the southern hemisphere of the earth. The precision mechanism that drives this dome gives it an accuracy that requires a correction of one day every 122 years! 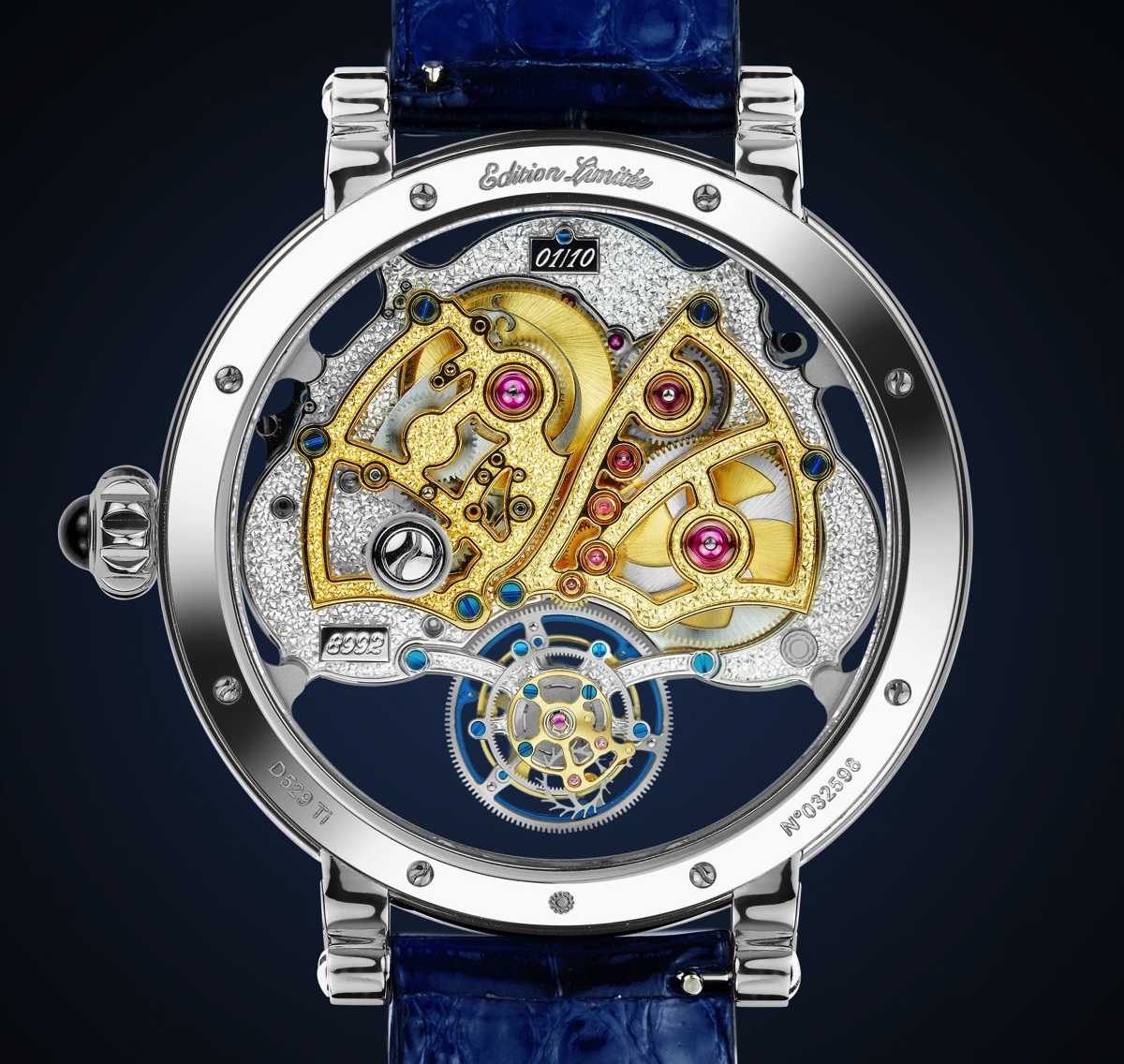 The domes of the second time zone and the moon phase rotate by the patented mechanism of the radial guidance system. Three rollers, in rubies adjustable by a micrometric screw, are arranged on the circumference of each dome. They ensure centering and the rotation minimizes friction and therefore, freeing the interior volume of the globes, which increases the chronometry and the power reserve of the timepiece.

The five days of the autonomy of this combination of great complications are displayed by an indicator, subtly, positioned in the middle of the case between the two strap lugs. A position that gives full meaning to the use of the sapphire crystal case. The indicator index runs linearly, whileits engraving is gradually directed on the edge of the movement.

Whether it is design or technicality, the resolutely innovative and modern character of the Brainstorm Chapter Two offers itself perfectly to artisanal watchmaking respecting the traditions, which has made the House of Bovet a success since 1822.