For the past twenty years, Olivier Gamiette has created concept cars for a major automobile group. In his spare time, his passion is designing watches. The French designer has published a book introducing his sketches and creations. As the industry oscillates between vintage and retro-futurism, he hopes to bring his spectacular horological designs to life.

For the past twenty years, Olivier Gamiette has created concept cars for a major automobile group. In his spare time, his passion is designing watches. The French designer has published a book introducing his sketches and creations. As the industry oscillates between vintage and retro-futurism, he hopes to bring his spectacular horological designs to life.
A

designer of concept cars for the past 20 years, Olivier Gamiette has turned his outsider’s eyes to the world of watchmaking. After drawing futuristic vehicles during the day, the Parisian spends most of his evenings designing horological displays, cases and mechanisms. In 2015, with no personal or professional ties to the watch industry, he decided to publish a book dedicated to his creations.

Olivier Gamiette’s graphic universe is visibly influenced by the new watchmaking scene which, from Vianney Halter to Benoît Mintiens, has been exploding the traditional codes of timekeeping since the mid-1990s. While the last few years have witnessed a strong resurgence of vintage styling and tradition through numerous reissues, we thought it would be interesting, at a time when the pandemic-shaken watchmaking world is looking for a new commercial, creative and existential breath of fresh air, to hear what this designer has to say.

After imagining the lines of futuristic vehicles during the day, the Parisian spends most of his evenings designing horological displays, cases and mechanisms. 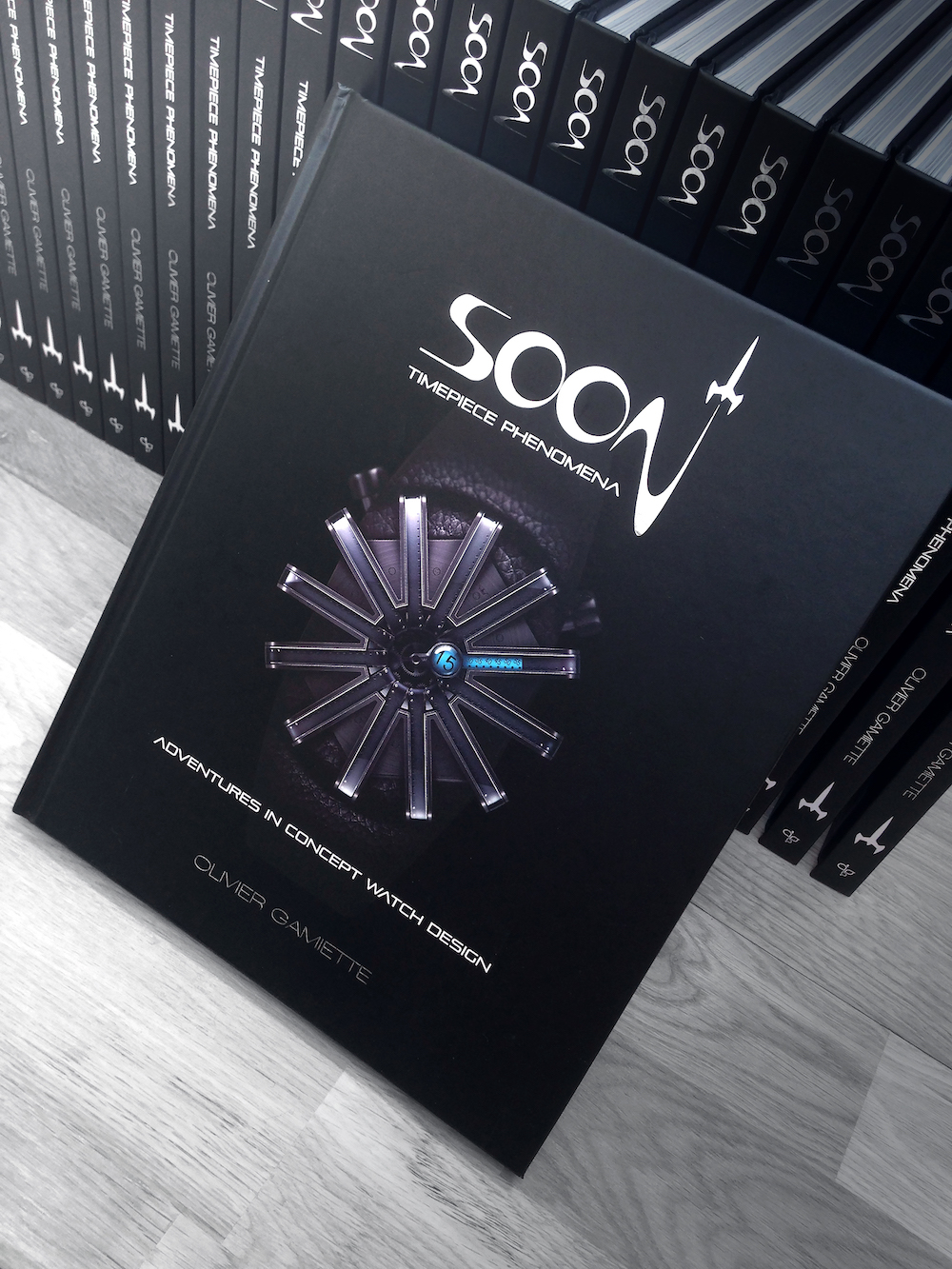 Europa Star: How did you get interested in watchmaking?

Olivier Gamiette: In 2012, as part of my work as a designer for the PSA group, we presented a concept car, the Peugeot Onyx, embodying the brand’s vision of the future. In order to amplify the impact with the public, it is customary to pair these dream cars with other equally fantastic accessories. I was inspired to design a watch that echoed the characteristic lines of this sports car. It didn’t make it to production, but it did awaken something in me: I rediscovered the fascination I had as a child for small parts, gears, the hypnotic rotations of certain mechanisms, a touch of magic and above all incredibly varied shapes... It’s a fantastic and utterly absorbing creative playground! I have been drawing watches almost obsessively ever since.

Indeed; in 2015 you even published a book presenting your watchmaking plans and designs.

This was in line with another of my long-standing ambitions: to publish a design book. I was obviously a neophyte in the watchmaking world. Subsequently, many readers told me that it was an original approach, because nobody puts forward pure watch design ideas like that, in an exploratory publication. 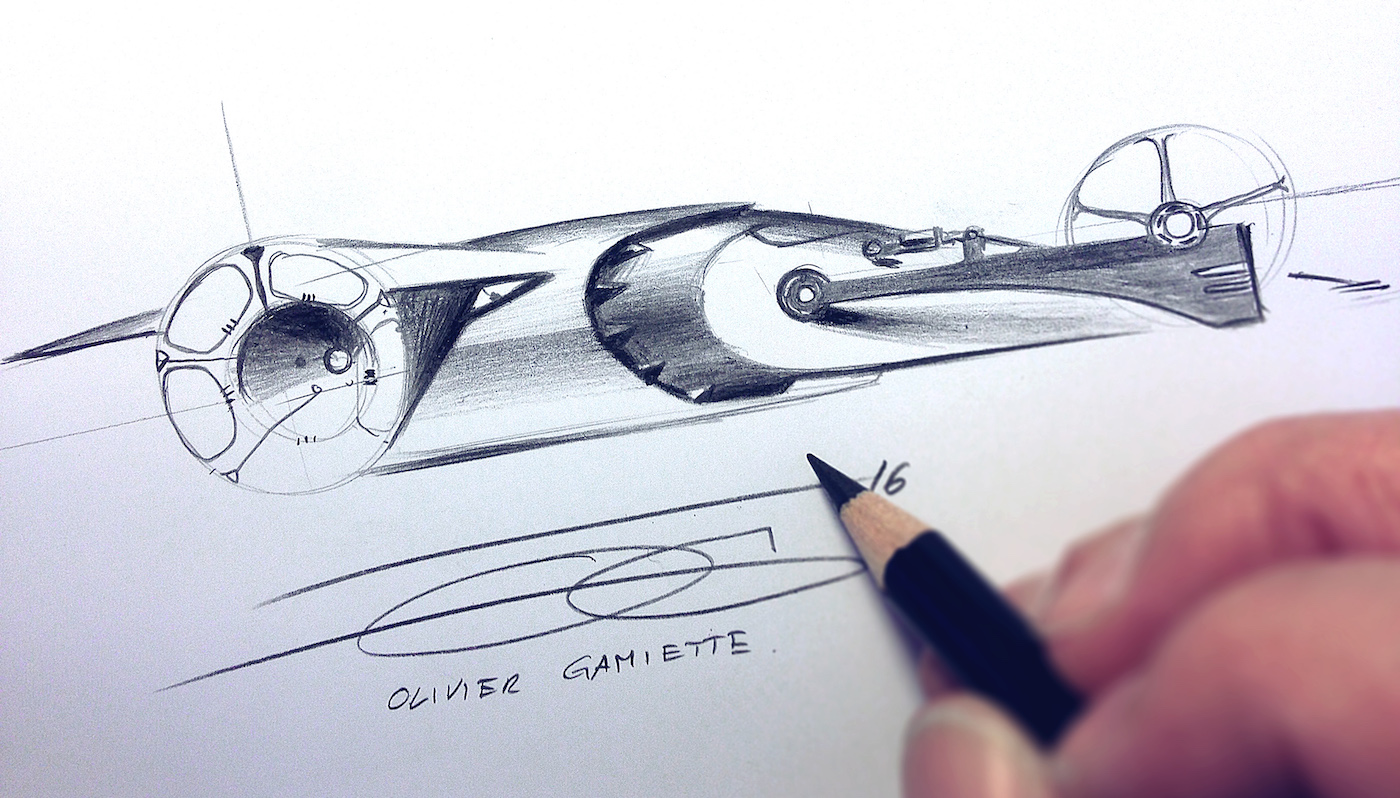 Wasn’t that a bit of a risky move, in terms of protecting your intellectual property?

It’s true that I got a number of calls asking whether my designs were protected – implying: “Can we use them for free?” As with any creation, of course you can’t! But I’m open to all proposals. My illustrations often highlight movements, mechanisms or concepts of time display that could be patented. It would be difficult to patent all of my inventions. I am more careful today when I publish my creations, especially on the internet.

“I’m fascinated by how the graphic audacity of independent brands has also pushed bigger brands to reinvent themselves.”

Do you still draw watches today?

Yes, every day! And I’m always learning. It’s wonderful because it fits in perfectly with my background and experience as a car designer. The two worlds feed off each other. Above all, it’s the intention to provoke astonishment and to create something new that remains unchanged. I am now able to design models and prototypes that I can test on my wrist, and that leads to new ideas: it’s an infinite process. 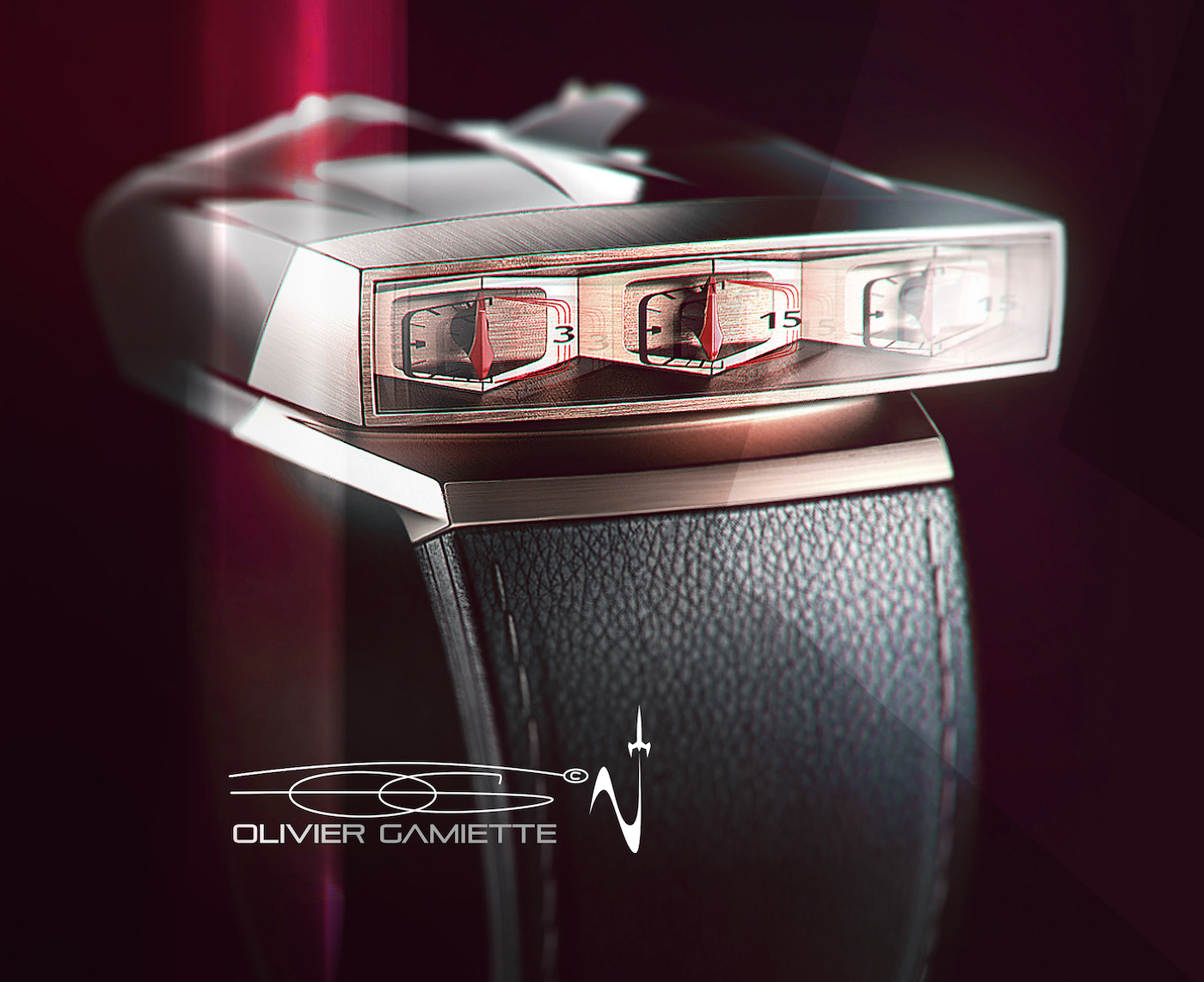 What are your design principles in watchmaking?

On the one hand, I take great care to make the models legible: even if their design may seem disruptive, I make sure that the concept of time is easy to grasp. It’s the same with fine food – if you try to put everything in, it won’t taste good... Some watches give the impression of a kind of graphical cacophony, but that’s not what I want to do. I also want to moderate the proportions of my models, because in my opinion they must remain wearable in all circumstances. But above all, they have to be absolute dynamite!

What is it about contemporary watch design that particularly surprises you?

I’m fascinated by how the audacity of the independents has pushed the big brands to reinvent themselves. An object as old as a watch still inspires and fascinates many designers. A timepiece is often much closer to “kinetic art” than to a really useful product. There is an agility in independent watchmaking that we do not know in the automotive industry, whose inertia prevents us from acting on our inspiration directly. The path from the initial idea to the finished product seems faster and easier in watchmaking. I like this ability to reconsider what already exists, to step back from a form that has remained virtually unchanged, and give it another identity, a different feel, and at the same time continue to amaze. I fully recognise myself in these intentions.

“The path from the idea to the finished product is faster and easier in watchmaking than in the automotive industry.”

Nevertheless, it’s hard to imagine horological designs as offbeat as yours being adopted by major traditional brands.

Of course, just as in the automobile industry, there is a classic branch of watchmaking, where everything is carefully controlled, which represents the bulk of sales, and occupies pride of place in the collective imagination. I say this without any pejorative intention. My projects include very few round watches and even fewer hands, because there are enough creative people working on those, and traditional watchmaking doesn’t necessarily need one more! My creative universe is closer to that of independents like Max Büsser or Vianney Halter, who encouraged me after the publication of my book.

Do you plan to turn your designs into tangible, marketable watches?

It’s all about time... and money, of course. I’m exploring what might be possible, because many people would be eager to wear them. I have enough drawings to make five more books, but rather than squandering ideas on the internet, it would be better to find another outlet... Today, I am very free in my approach to watch design: shapes, themes, display types, jumping or retrograde hours. My creative spectrum is deliberately broad, but if there were to be some form of “concretisation”, I know that an identity would have to be clearly defined.

My training as an engineer and my admiration for mathematics, combined with my passion for style, all lead me to challenge myself continuously. That’s how I create and amass hundreds of pages of ideas. I then have to let them settle, before identifying the best of them a few weeks later. Those that pass the test are transferred in colour to Photoshop and then to 3D modelling.

“Whether it’s a car design or a watch design, I always start with a pencil sketch.”

Do you always start your drawings in pencil?

Whether it’s automotive design or watches, I always start with a pencil sketch. For me, the pencil is the only tool fast and nimble enough to capture ideas that might arrive at any time... even at night. My sketches capture the intention and identify the details, the mathematical or mechanical elements that will have an important role in the future concept. Ever since I was a child, I’ve had a fascination for spinning wheels and the spirograph. It’s a tool based purely on mathematics that generates absolutely bewitching shapes. The balance between beauty and science constantly inspires me.

Reproducing what already exists has never really been part of my creative process – it is the search for novelty in all its forms that drives me. I entered the automotive industry in the 2000s because I wanted to acquire the skills to be able to create my own sports car, just like Franco Sbarro. But it’s a very complex and almost impossible process, to tell the truth. In watchmaking, I have found a more affordable path from creation to the finished product.

Success story: a reorientation towards protective (...)

TIME.BUSINESS With the pandemic now a part of everyday life, mask production is becoming a huge industrial market. Thousands of factories have opened in China to produce (...)

OneOf: a new accuracy tool, now available in the (...)

TIME.KEEPER The Swiss brand OneOf offers an innovative, portable and compact device that can validate the accuracy of a mechanical timepiece. It is now available to (...)

HIGHLIGHTS At the start of the 20th century, Mouvex was an elegant watch brand sold in boutiques in Paris and across Switzerland. The historical Swiss watch brand has (...)