Reuge is the last-standing manufacturer of highly complex mechanical “tabatières” in the world. Reminding its connection to nature, the brand’s new piece features a surprising bird automaton with an enchanting tune.

Reuge is the last-standing manufacturer of highly complex mechanical “tabatières” in the world. Reminding its connection to nature, the brand’s new piece features a surprising bird automaton with an enchanting tune.
O

nce more, Reuge demonstrates its unique know-how with this contemporary tabatière available in three colors, blue, fuchsia or silver, each bird being paired with the color of the leather gusset.

Born in the 18th century, snuff boxes - called “tabatières” in French - were a major, often bespoke personal and valuable possession. A rare few concealed a surprise behind their beautiful decorations: an automaton. In an attempt to represent nature as accurately as possible, the most skilled craftsmen put their unique know-how at work in reproducing a bird, give it some motion and a voice. Nowadays, Reuge counts among the rare few that can master this level of intricacy. 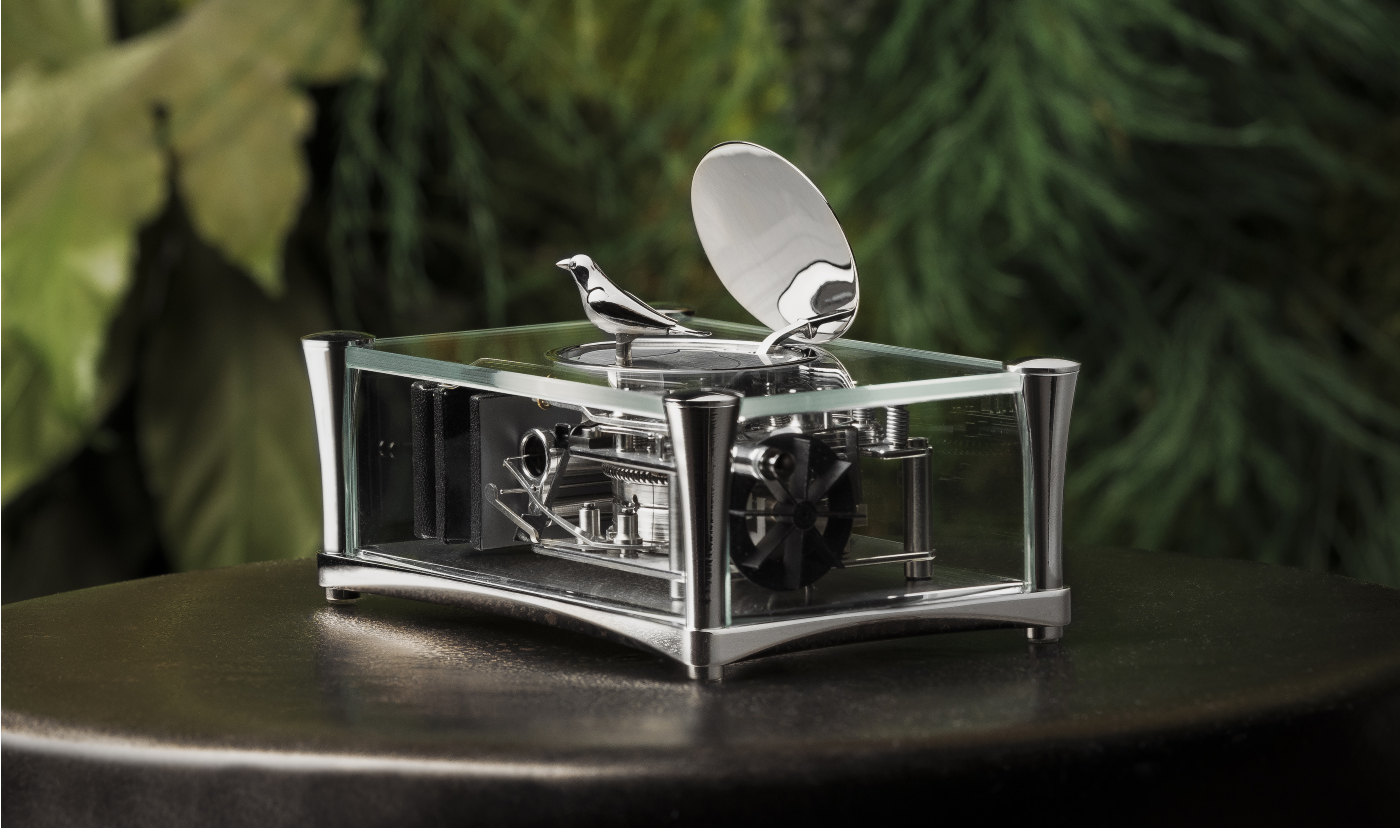 The elegant tabatière reveals its element of magic on demand, by activating a lever. An oval cover lifts and reveals a singing bird that literally pops out. The colorful animal, composed of 28 parts, in titanium and white gold, flaps its wings and moves every joint of its small body in unison with an enchanting tune. The spectacle is so accurate that it almost sounds like a real bird. This new collection attest to Reuge’s ability to draw inspiration from and recreate the nature surrounding it. 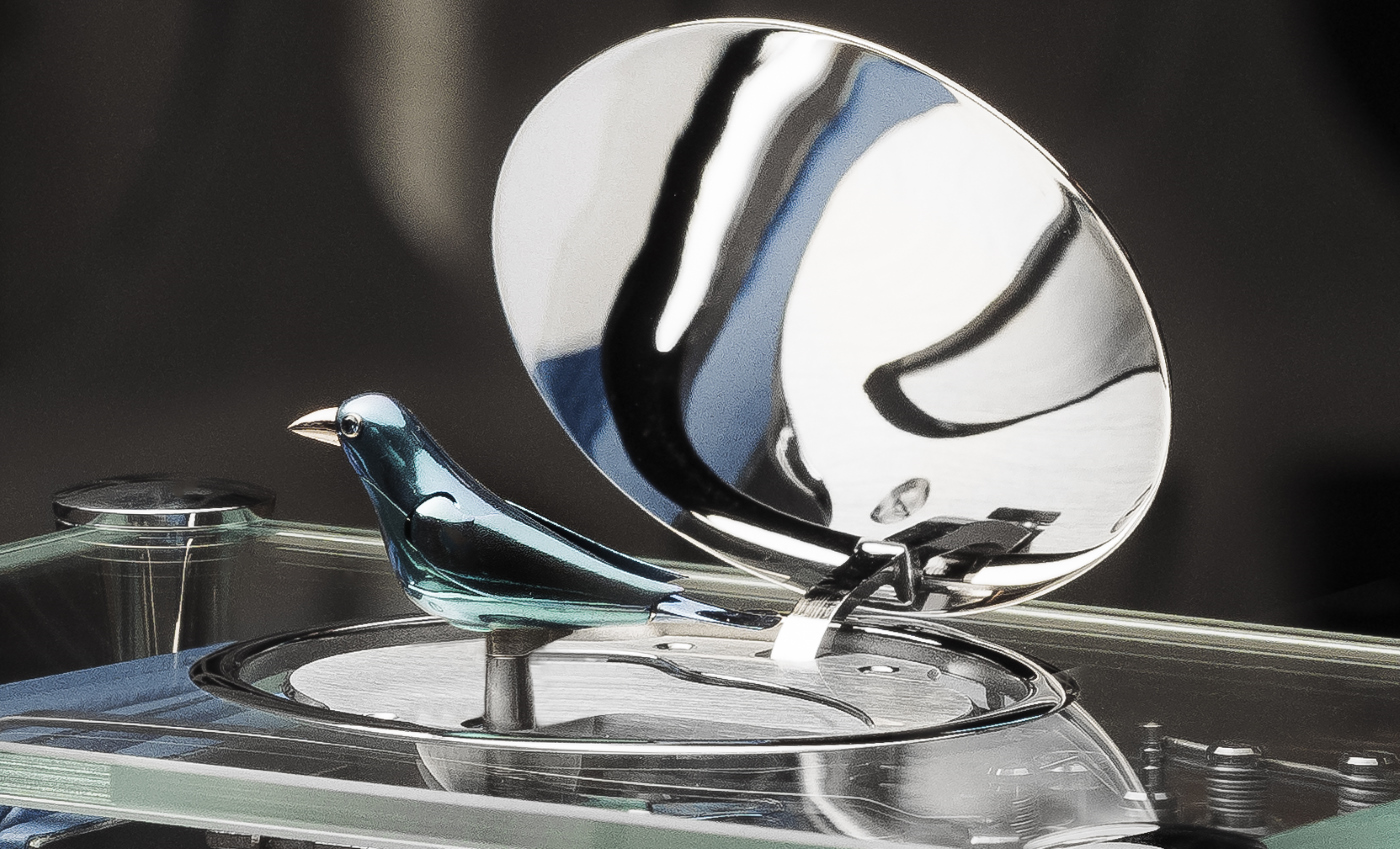 The bird’s tune stems from an extendible gusset in leather that is stored, much like an accordion pleat, by the mechanical movement’s side. The making of this leather pouch requires a dexterity anchored in a tradition that very few craftsmen possess. The single most important prerequisite is that the result be airtight, to have the gusset completely impermeable, after long hours of work. Even a tiny air leakage could turn the bird’s song into a whisper. The result is an organic sound of purity, where you could close your eyes and imagine being in the nature hearing an actual birdsong.

The motion is determined by an automaton enclosed in a transparent casing, beside the gusset. Reuge managed to reproduce the bird’s exact mimics, right down to pairing a tilt of the head with a flapping of the wings. The assembly of different and complex motions under a single mechanical movement, composed of 250 pieces, is an absolute feet of craftsmanship. Assembled by hand in the Ateliers in Sainte-Croix, the result when the tune meets the motion is breathtaking.

Three choices of color pairing the bird with the leather gusset are available so as to suit any aspiration. A timeless blue evoking purity; a bold fuchsia tint for liveliness and passion; an elegant silver, for an elegant yet understated look. Reuge chose full transparency so as to disclose the automaton movement in all its beauty. Upon activation, the observer notices the mechanical complexity generating the bird’s movement and can admire the gentle sway of the gusset conveying sound. Four conical columns delimit the tabatière’s perimeter giving the object of art a streamlined, elegant look. Each bird’s color, is paired with the color of the leather gusset, giving each of the three executions a very personalized and modern touch. 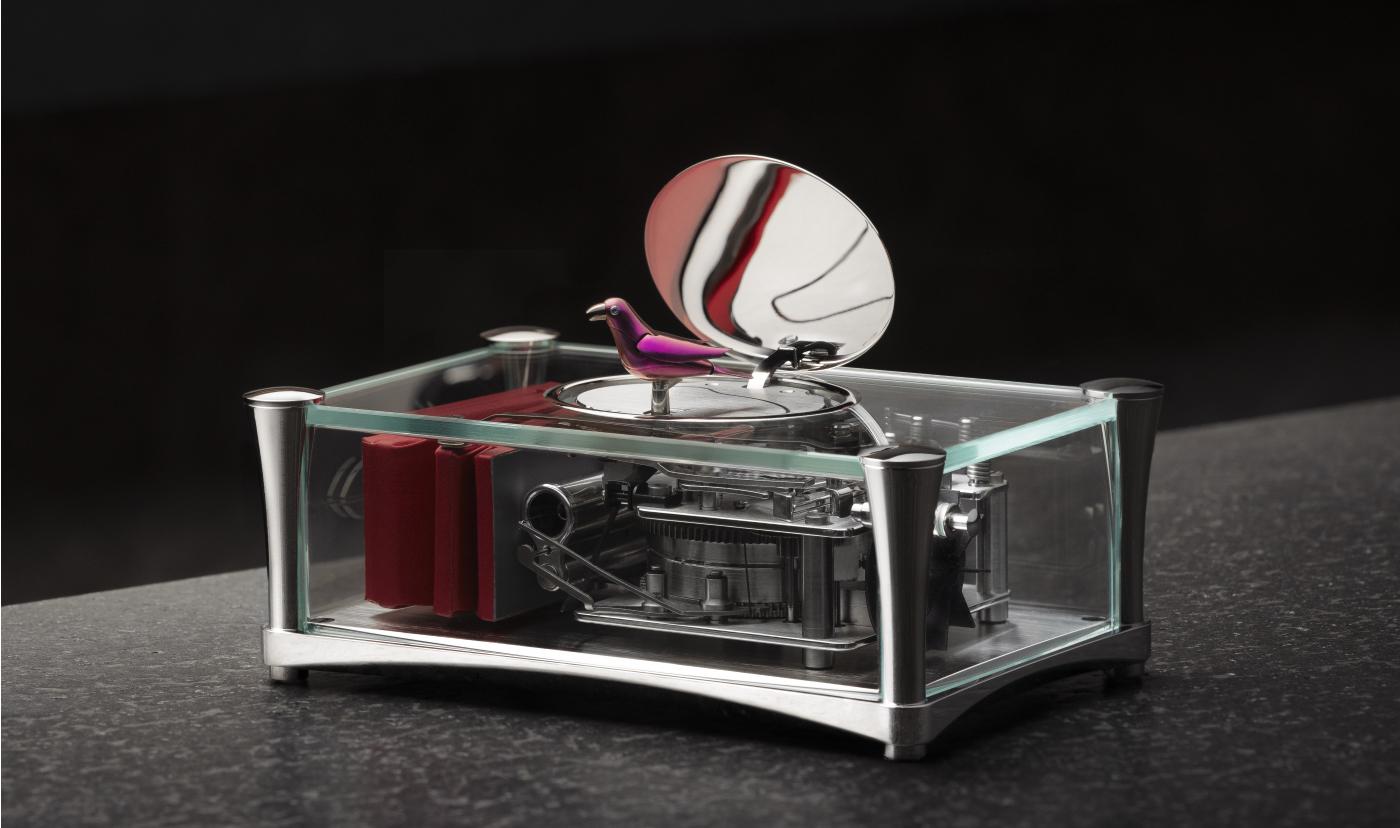 Reuge’s contemporary execution of the Tabatière is a game changer. It’s the continuity of an age-old tradition while being forward-thinking and innovative. What was once the artifact of a bygone time becomes a modern and emotional spectacle. The automaton’s uncanny realism is a testimony to the brand’s ingenuity and know-how. The complexity behind the movement is the key to uniqueness. With this fundamental pillar, there should always be more to explore in this collection in the months to come.