Excalibur Superbia by Roger Dubuis is a stunning contemporary epitome of extravagance guaranteed to send the senses of hardened hyper watch aficionado into overdrive...

Excalibur Superbia by Roger Dubuis is a stunning contemporary epitome of extravagance guaranteed to send the senses of hardened hyper watch aficionado into overdrive...
T

he ultimate example of Roger Dubuis’ unshakable pride and excess, Excalibur Superbia is crafted in palladium-enriched white gold and set with exactly 600 precious white diamonds and blue sapphires. This offers a truly extravagant housing for Roger Dubuis iconic signature calibre: a brand-new Double Flying Tourbillon movement, the RD108SQ, inspired by its legendary version launched in 2005, the first double-regulator calibre connected with a differential, built up in volume and adorned with a diamond-set star.

For the RD108SQ, paying tribute to Roger Dubuis’ status as a forerunner in the field of this extreme complication mastered by few other watchmakers, in the RD108SQ, the double flying tourbillon is transformed into the ultimate iconic signature.

Sending it firmly into the hallowed halls of world premieres, the excessiveness of the Excalibur Superbia comes neither from its alloy nor its number of stones. What makes it truly bold is that every stone set on the flange, the bezel, the case and the crown is tetrahedron shaped and assembled with an invisible setting on curved surfaces. The hardest way to set a stone, an invisible setting becomes nearly impossible when required on a curved surface.

In this masterpiece in which the complexity of the pattern surpasses any norm known to mankind, master craftsmen at the Maison’s Geneva Manufacture have thus set about creating a backbone structure to encapsulate each stone from the back, complying with the brand’s total determination to avoid any material between the stones themselves. 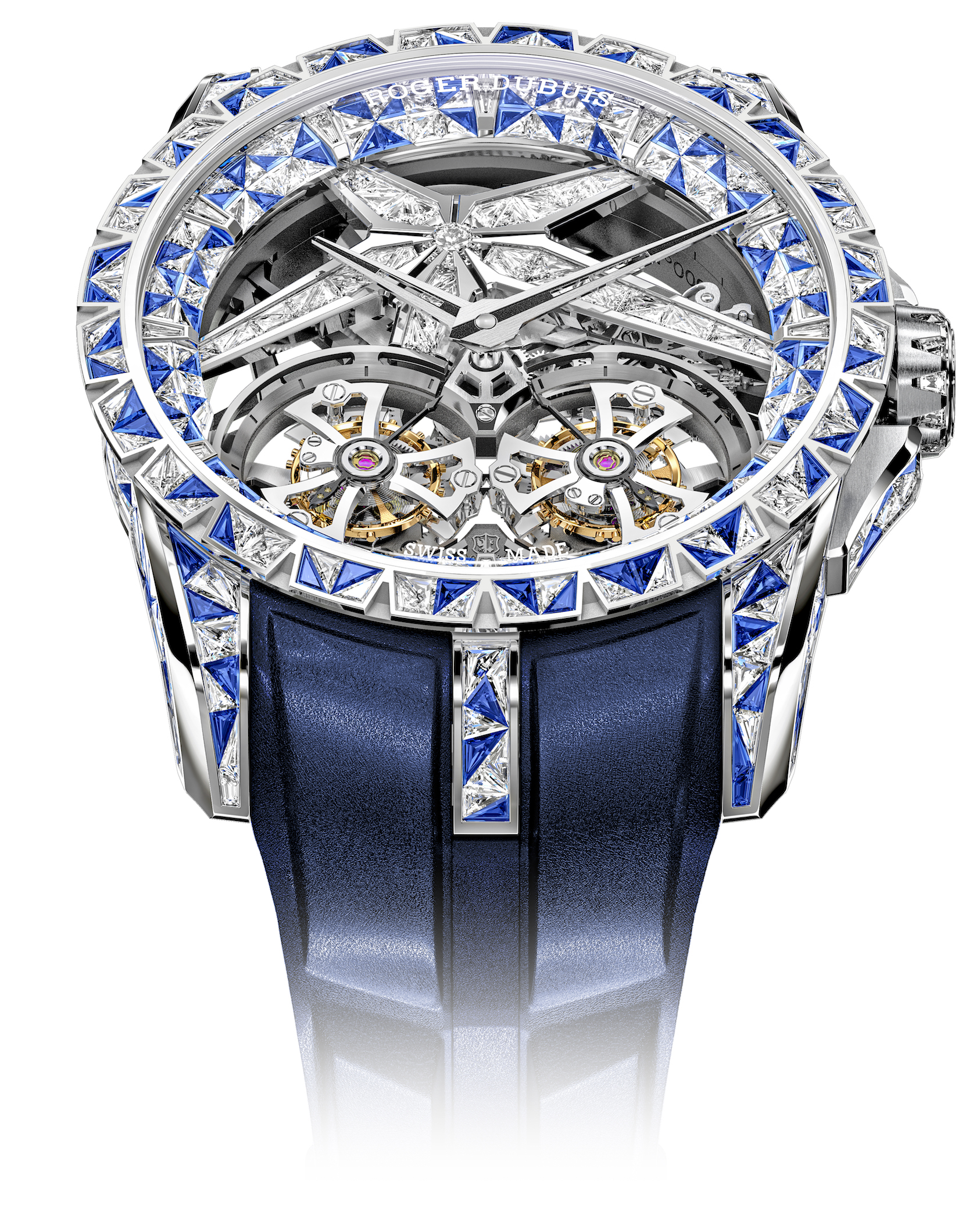 To complicate matters further, each and every glittering stone in the Excalibur Superbia is a tetrahedron, a shape requiring boundless cutting skill as its extreme thinness greatly increases the risk of breaking.

The final sting in the tail of the Excalibur Superbia comes with the grooving – the last step required to complete the invisible setting with the previously perfectly triangulated stones. This is so hard to do on a tetrahedron stone that it took each gemsetter an average of 30 minutes to do a single groove, corresponding to 900 hours for this operation alone on all three sides of the 600 diamonds, plus 420 hours to set the case and bezel – and that’s without even counting the stone-cutting.

The entire process takes about three times longer than the same case set with baguette-cut stones. And just for good measure, reaching the very pinnacle of complexity Roger Dubuis-style, in the Excalibur Superbia, this already painstaking, groundbreaking process has been entirely achieved on a curved surface. 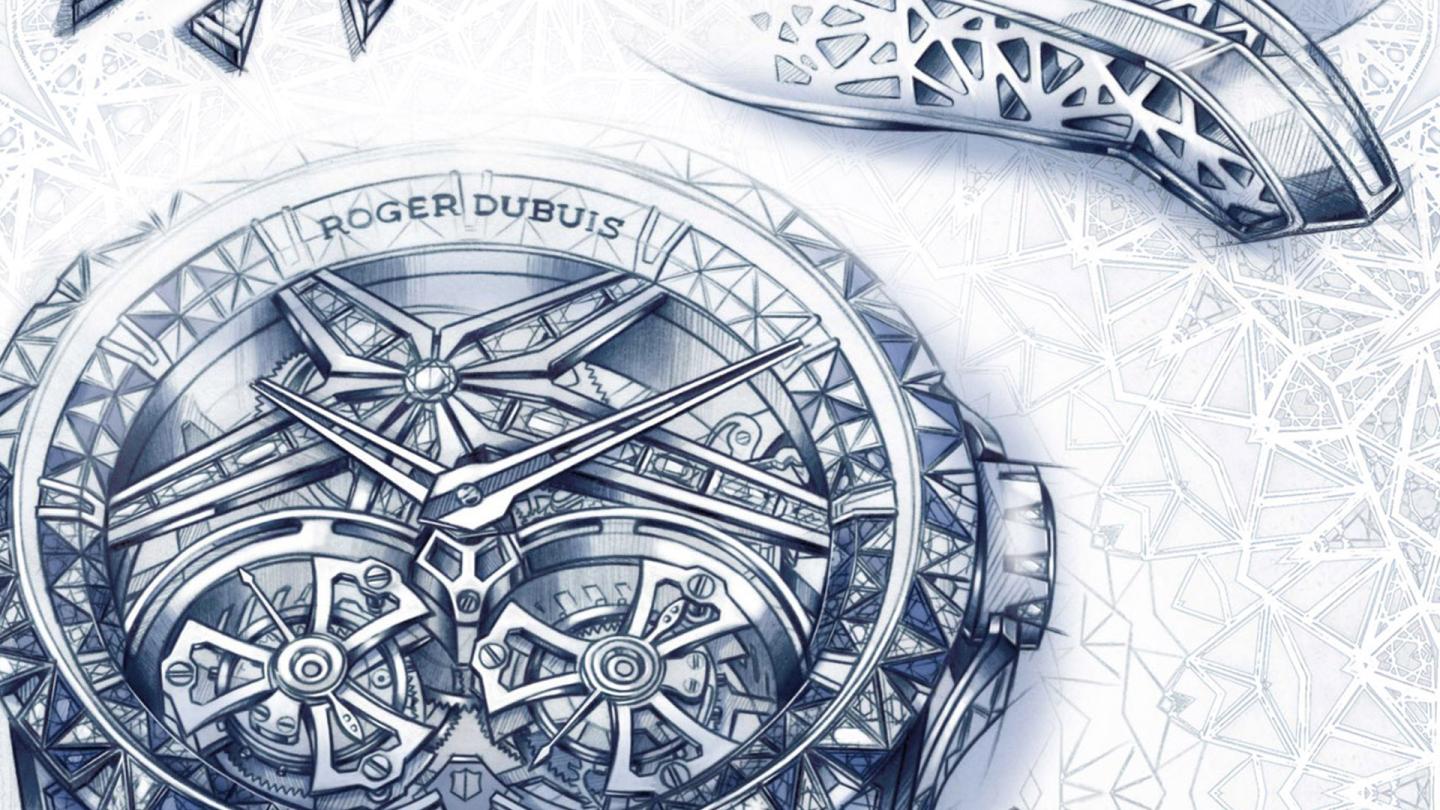 TIME.KEEPER With the introduction of Serpenti Spiga, Serpenti rises again, a forever-icon, reinvented anew for 2021. A symbol of perpetual renewal, Serpenti, the (...)